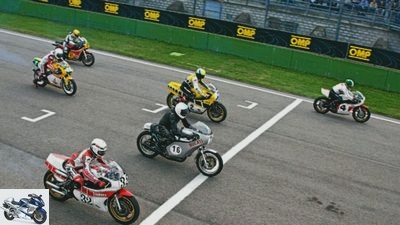 Finale: Revival of the 200 miles of Imola

Finale: Imola Revival
Revival of the 200 miles from Imola

Do you have any sounds? Not just the soundscape of the “200 Miglia di Imola Revival” reminded of eventful times, when one didn’t even dare to dream of cell phones and the racing heroes were still called Giacomo Agostini, Paul Smart and Kenny Roberts.

It fits perfectly, the frame, on the first weekend in October 2010: under a bright blue Italian sky, the air shimmers between pines and cypresses. The ground trembles in “Autodromo Enzo e Dino Ferrari” from Imola. Where the motorcycle world championship also took place from 1996 to 1999. Motors with completely different racing machines in terms of concept and displacement roar, gasp and smack in competition, blow dry the cilia in the ear canal. An orgy in phon and decibels. The retina also glows, colorful continuous fire patters on the receptors, the synapses cannot keep up with impressions. Can this be? Is it all real??

25 years after the last 200-mile race in 1985 and almost 40 years after the legendary racing premiere in 1972, the heroes and their machines of yore are once again unanimously united here. What a parade!

There are three Yamaha riders on the front row: Giacomo Agostini, Kenny Roberts senior and Steve Baker. Together they flank Paul Smart on the 750cc bevel Ducati. Paul Smart, especially his name, will forever remain associated with this route. Because at the start, on April 23, 1972, Smart’s 29th birthday, the Briton landed a bang in Imola with the silver Desmo-Duc. He won the first European 200-mile race based on the US model, in front of and against his team and brand colleague Bruno Spaggiari “Ago” on the MV.

This victory made Smart immortal. And the still very fresh Ducati V2 engine with its L configuration at the same time. For Smart it remained the greatest sporting success, inextricably linked with its winning Ducati and its starting number 16. Agostini did not follow suit until 1974, Baker won in 1976, Kenny Roberts won again in 1977, 1983 and 1984. So the starting line-up makes sense. It is a matter of honor that there are other Imola winners right behind them: Marco Lucchinelli (1981, in a 500cc Suzuki) and Johnny Cecotto – the Venezuelan, who rarely stays in Europe, won Imola in 1975, 1978 and 1980. So an illustrious group. 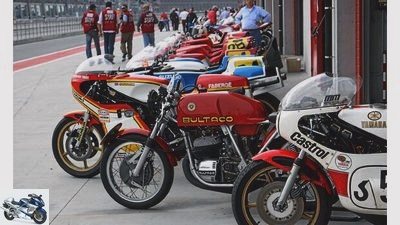 Time travel: this is where racing technology from the 1970s comes back to life.

Lo and behold, all of the older men still know how to pull the cable properly. First and foremost, Steve Baker lets it really fly again on the beautiful Yamaha TZ 750, storming out of every chicane on this tricky course with the front wheel raised. Respect. Kenny Roberts on the 500cc Yamaha plays with Carlos Lavado on a 250cc. The US boy lets the South American get up at will and increases the distance again. Wow. Or maybe Lavado isn’t quite fit. Any consequences of the oh-so-delicious Vino Rosso the night before? The rumor seems to be true. A little later, Carlos stops by Marzia (42 years old) and Roberto (51 years old).

The motorcycle-crazy Italian couple celebrates the local way of life in the paddock: Together with children and many friends, they conjure up a long, festive tavula out of desolate beer table sets with paper blankets. There is space for homemade pasta, salami, parmesan and several bottles of wine. Roberto is on a racetrack for the first time in his life with his 750 Laverda. He is one of around 250 private participants in free driving for machines built between 1949 and 1980 with at least 125 cubic meters. But for today Roberto ends: “Problems with the brakes” – and not just a little white wine for lunch.

The revival of the “200 miles from Imola” is organized by the same event team as the Bikers ‘Classics in Spa-Francorchamps, Belgium. Despite the similar concept, the mixture of umpteen world champions, many former GP drivers plus private classic friends and normal drivers, the atmosphere in Imola is surprisingly different: more feminine (prettier women), more festive and familiar at the same time. Even as a complete stranger you are invited to eat, celebrate and drink too. And the program booklet in DIN A4 is almost as thick as a telephone book, with a glued back. However, unlike in Belgium, it is monolingual Italian and contains interesting excursions into the glorious past of racing as well as numerous oversized advertisements from the local craftsmen’s guild and service providers’ guild. 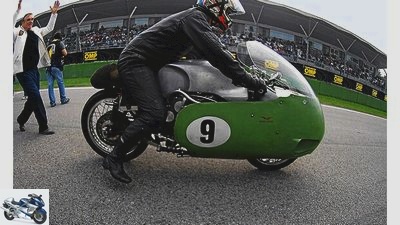 But back to the motorcycles, which are the second top attraction here alongside the flesh-and-blood racing heroes. Compared to other classic events in northern Europe, the Italian brands clearly predominate. Ducati is represented with a small exhibition on the factory history, Cucciolo 50 from the 1950s to the Hailwood replica from the 90s. A feat, for the brand from Bologna it is a home game, Imola is only about 40 kilometers to the east. The official sponsor, however, is Moto Guzzi from Lake Como. And Guzzi is also bringing one of the absolute highlights to the start with the 500cc eight-cylinder.

What really gets the audience going is their 15-time record world champion Giacomo Agostini, who is accompanied by their wife and son. Who wants to know where “Ago Nazionale” just stops, just has to look out for the largest crowd or follow an infernal scream from four cylinders. The voice of the track announcer cracks when Ago climbs into the saddle of Valentino Rossi’s freshly retired factory Yamaha M1. The ultra-modern MotoGP bike seems to be a lot of fun for the 68-year-old. Only a few laps were determined, but finally Ago has to be waved off.

The whole event is characterized by the joy of driving, the joy of hearing, being amazed and looking. The premiere is said to have attracted 10,000 visitors over the entire weekend. It could have been more, after all, admission is free. Access to the pit lane costs between ten and 30 euros. If you want to experience all of this yourself, you just have to be in Imola on the first weekend in October 2011. It is worth it .. Or visit the Bikers ‘Classics in Spa-Francorchamps on the first weekend in July 2011. Until then, the Internet offers a foretaste and appetizers at http://it.200miglia.com and www.bikersclassics.be.