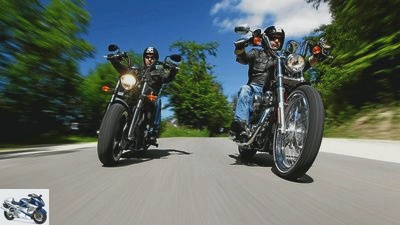 It’s like always. They disagree. “How can you steer even halfway with these divining rods?” Growls Kaschel. Henniges grumbles: “Firstly, you can use it to steer normally, and secondly, it’s cool.” Kaschel is doing the test.

Henniges That’s exactly what I thought! The Kaschel really has no idea. The whole time he sits folded up on his stool, flies more than drives, and can’t even imagine that a motorcycle with an apehanger can actually be steered normally. The other day he laughed himself limp. Five minutes at a time. Looked like a match. Chalk white with a red head. And that’s only because after the presentation of some bikes from the Italian manufacturer Headbanger I said that of six motorcycles, of all things, the two easiest to steer with Apehanger. But you have to give the stubborn Ostwestfalen one thing: he wants to try it out. In a few minutes he’ll be arriving at the meeting point with a Victory Vegas High Ball. The 1200 engine on my Harley Sportster Seventy-Two is already ticking away with relish. I’d better get another coffee, because the Kaschel is usually late. And that although he supposedly always drives full throttle.

Kaschel A.pehanger! I know exactly why that is called. A few meters are enough for me. In fact, I don’t even need that. I just have to see Henniges crouching on his Harley at the rest stop, hands up. Is there no longer a blood alcohol limit in Germany? So, that’s exactly how you make a monkey. But I’ve managed to do that now. I am wearing a fringed jacket. I let Henniges talk to me about it. Because of “feeling real” and such. I already know how he’ll grin. Oh man! The worst thing is: I just found myself even finding it a little good. Lolled there like on a Roman orgy couch, while the booming 1700s massaged my crotch – you can become contemplative. Meditated in front of me on the three-lane expressway and thought about what the guy who invented these handlebars was smoking. And what happened? At some point the 30-tonne truck behind me unpacked its alphorn. The driver yelled what the hell I was doing while he passed me on the right. Seriously: I am so scared that despite the Apehanger it made my armpit hair sweat. Then of course I yelled back. Whether he had to race like that and had tried to steer with a square steering wheel. He just shook his head. So there is Henniges. Without a fringed jacket, of course. And grins on both cheeks.

Kaschel So now turn, just don’t go wrong. But, to stay with the truth: You can get around the corner even with this 314-kilogram stretch and this handlebar, just differently. You don’t throw the Vegas High Ball (what a name!) Into the curve, you talk to it well. Just like the fringed Sam Hawkins back then his mule Mary. You just have to find the right approach. In addition to the 130 mm front tire, with a wheelbase of just under 1.70 meters, to a lean angle that reaches its limits in the elevated roundabout, to a transmission that slams like a 45 with every gear change. But I’ll get the hang of it! Clutch the clutch cleanly even when shifting up, brake more at the rear than at the front, avoid lean angles for the hell of a lot. And always grin happily, like Henniges. So there is the photographer. Why is he laughing himself now? Oh yes, the fringed jacket! But it doesn’t matter. Better fringed jacket and matt black paintwork than three tons of chrome plus paintwork in “Hard Candy Big Red Flake”. No nonsense, that’s the name of the silly paint job on the Harley. You have to admit it. Probably the same guy who invented the Apehanger made it up.

Henniges My goodness, how this East Westphalia swears! What can I do if a truck overtakes him? I saw the thing, it was even a real heavy load. And now he blames his bike for that. Nonsense! His high ball has 90 hp, pushes a fat 140 Nm at 3250 rpm and runs easily 180 km / h. The gas is on the right boy! And then the number with the fringed jacket. Did he actually buy it from me and gondola all over Stuttgart in this outfit, huh. And now it’s Christopher Street Day. But we have a leather jacket as a replacement. To redemption, so to speak. And how excited he is about the gearshift … As if he’d only driven automatic transmissions his whole life. Of course you have to use the clutch when shifting, man. That is part of the experience and is part of it. Motorcycles of this caliber let you take part in all the promotions. They tell you about successful gear changes, let you feel when their huge pistons whiz through the dwellings, and the low revs in connection with the large flywheel have a relaxing effect on the driver. I would never have thought that it would work so well with the Kaschel and that it could be leathered off by a 30-ton truck. But there, now he has something new to complain about, curses over the open face helmet. Time to move on.

Kaschel This permanent grin is really hard on me. Do I still have flies between my teeth? Probably the guy with the apehanger also invented the jet helmet. Are there no mosquitoes, flies or beetles in America? Probably, but somehow they get lost in these vastnesses. But here is Europe, damn it! Beetles close together, flies, wasps, all the buzz. And whenever I have just arrived in cruising mode, suggestively tucker, then – splash – there is another cattle in my mask. Even in the eye. And I seriously ask myself: Is it worth it, this sporadic feeling of freedom, this immediate, this informal? I already understand what Henniges means. But if the price for that is a beetle cemetery in the face, then it’s pretty high. Just like the one for this Victory. 14 290 euros. The Harley is a bargain at 11,670 euros

Henniges I register it! Really now. On this show, which is called “World of Wonders”. Stefan Kaschel, father of four children, avowed speed driver and test editor, is the only person on this planet who flies hit right in the eye, even though he is wearing sunglasses. So that we understand each other correctly: The sunglasses are safe. For some reason – magnetic field, echo sounder, magic – the creatures manage to get through the glass into the fluffy eye. Those who do not succeed shatter on the skin of his face. Well, maybe he’ll win prizes with this trick, who knows … Thank God we’re finally on our way. Before that he was oiling around again because of the prices of these bikes. For the money you would actually get 180 hp easily, he said. Sure sure. He is right. But buy yourself a 1000 GXY RR for 14,790 euros today and sell it in two years. You still get half for. And do the same thing with a Harley or Victory – the loss in value is much less. But he doesn’t care. I already know what’s next, because there are alternating curves in front of the handlebars. Wide radii and also a few very narrow ones. A paradise for speedsters. Only fun on these stands for experienced pilots. Because you have to drive the wide rain lines, and that in the dry. I’m afraid the Kaschel will shave off his footrests for 14 kilometers here. And swear again like a pipe sparrow …

The Victory with its 90 hp drives away in front.

Kaschel Aha, depreciation! That is a good time to think about it. Why don’t these things lose their value? N / A? It’s quite clear: You can easily sell a Sportster Seventy-Two or a Vegas High Ball like this in ten years, because the devices are sure to be up to date from 2012. As sure as the current one on the eighteen hundred windstorm. In terms of marketing, a concept that will last forever. And then you also dare to write “Freedom V-Twin” on the engine cover. What does that mean anyway? Freedom for the V2? Or on the other hand: “6 speed overdrive”. Aha, but a fabulous six courses. Well, measured against the fact that the Harley has to peddle “5 gear”, that’s something. And then these silly cubic capacities everywhere. You don’t even want to imagine what would happen if something really happened. “Significant power output” would then be emblazoned in large letters on the tank, or “well working gear box” or “one channel ABS”. Oh man, and now we’re off to the mountains. With real curves – and the road gets worse. Worst of all, this would-be apehanger crushes your back in such a way that, despite the Victory’s reasonably acceptable suspension, every transverse joint shatters the intervertebral discs. I already know how I feel tonight. Now the Henniges is also accelerating …

Henniges Sooo! Brake early, take your speed with you into the bend, dive carefully and accelerate again at the apex. You see, Kaschel, everything is exactly the same as with the sports bikes. The only difference is that you have to drive particularly wide lines in right-hand bends because of the silencers. And let’s be honest: steering with moderate apehangers is not as imprecise as is commonly assumed. Even this stubborn head would have to admit that. Especially the Harley, with its narrow 21 mm front wheel, turns around the corner by itself. Still, I’m glad he drives Victory. Because Kaschel, an avowed performance fetishist, with 67 hp and six hundred pounds of weight would most likely work up a sweat when overtaking, that the following traffic would get aquaplaning problems.

Kaschel So, let’s go. Right schraddelts, left schraddelts and probably in the middle too. Lucky that the thick 1700 high-ball V2 is much better than this Harley shaking monster. I can make up for a lot on the straights. Or at the traffic lights, as before. Henniges is as happy as a child about the “good vibrations”, the pulsating air filter cover and a horn that constantly massages your left calf. And then? He literally stands while the high ball throws off properly. Now let’s be serious: If I’m cruising around with something like that, something has to happen when I accelerate. But please do the right thing. At the Seventy-Two, I’m more afraid of what is likely to happen: namely that the Sportster-V2 will throw its innards off. I don’t have room on this seat roll either, almost slide down the back. It’s more for little people. Or very small ones, like the one in front of me. The tiny tank with a ridiculous 7.9 liters fits the driver.

Henniges I already suspect it. As always, colleague Kaschel can only be convinced by the measurement and acceleration values. 7.9 liter tank volume? You have to refuel earlier. Bad brakes? Get in earlier! Dear Stefan, Cruisers drive those who no longer have to prove anything to anyone. The apehanger is not only an expression of an attitude towards life and a stylistic device in custom bike construction, with it you can even steer with some precision. By the way, Kaschel: Have you ever asked your super sports buddies who’s wrists don’t hurt after a day of squeezing on the Wuthocker??

The route is the goal? Nonsense! The goal determines the way.

Similar vehicle concepts, but two completely different engines: here the 1.2-liter Sportster V2 with simple bumper / two-valve technology that produces a clean torque curve with moderate peak performance. There the ohc four-valve engine of the Victory with a displacement of over 1.7 liters, which puts a truly enormous torque on the rear wheel.