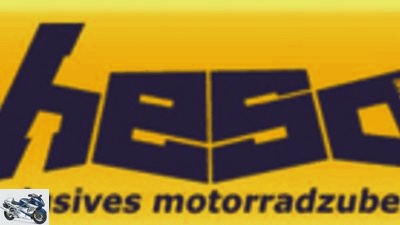 So far, Karsten Henkel from Hesa ​​Motorsport had mainly dealt with converting Japanese big bikes into radical street fighters. But now the man from the Westphalian town of Kierspe also serves the more conservative BMW customers with interesting technical and innovative design solutions. They can either put together their dream BMW from individual components or choose a complete conversion. For example the R 1150 R..
The Roadster had to endure a profound operation. The rear frame was cut off directly behind the strut mount. A thick U-profile made of aluminum serves as a replacement, coated with black plastic to match the original frame and screwed to the upper strut mount. The Hesa-Mannen mounted the mount for the original seat cushions directly on this frame. Underneath there is space for the on-board electronics and a small storage compartment.
The new stern is more stable than that
Series counterpart and can therefore
can be used as a bracket for the underseat exhaust system. For the two Bos silencers that come from the R 1100 S, new pipes were bent, which have the original catalytic converter R. Connect 1150 R to the silencers. A cover
made of carbon fiber serves as heat protection. Acoustically upgraded, the boxer now rattles throatily and hoarse from the two tailpipes.
As an alternative to the pillion seat bench ent-
Karsten Henkel wrapped a slim like
dainty cover that connects
with its rear bumper and newly designed side panels, it is reminiscent of the lines of Italian sports motorcycles. A rear light with LED technology replaces the series part. A new control board had to be developed to ensure that the electronics continued to function properly.
The front section of the mega-conversion is adorned with angular cockpit cladding with two headlights arranged one above the other, which the tuner also adapts to other models and which illuminate the road properly. A front mudguard specially developed for the R 1150 R goes with it.
In addition, the Hesa-BMW gets wider handlebars, which convey a new kind of driving experience that is unusual for roadster fans. The R 1150 R works-
more active. Leaning forward a little further and broad-shouldered, the driver holds the heavy one
Boxer under control. So he reacts to steering commands with less effort. In the dainty, oval mirrors, the aluminum arms of which are clamped to the handlebar ends, the view to the rear is limited. As the saying goes: if you want to be beautiful, you have to suffer. nk