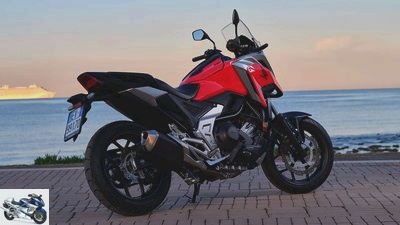 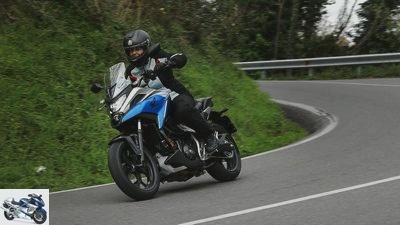 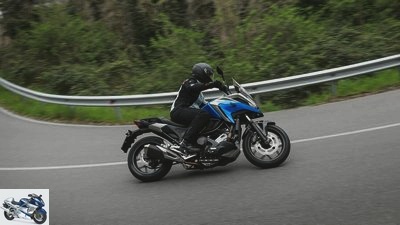 3/15
In conjunction with the shorter translation of the first three gears, the 4 hp are definitely noticeable.

5/15
The LCD cockpit is easier to read and now offers more information, including the average speed.

6/15
The tank is under the seat, which restricts luggage storage. Side cases are available as accessories.

7/15
The storage compartment under the dummy tank is still the hit. It has been enlarged and now holds an XXL helmet.

9/15
In the event of an emergency braking, the hazard warning lights switch on automatically. Taillights and headlights have been redesigned.

11/15
There is also a newton meter more torque from the revised engine.

13/15
With the more powerful engine and the shorter gear ratio, it gains temper.

14/15
And because it no longer runs into the limiter, even trips on passes are pure joy.

15/15
It is practical anyway with its storage compartment and frugal consumption.

The popular Honda NC 750 X is now stronger, more dynamic and more fun. At the same time, the naked version S disappears from the market – the Japanese are now fully relying on the road enduro X..

Wallet and smartphone stuffed into the jacket, papers and handkerchiefs put in the trouser pocket – but where should you put your sunglasses and rain suit? Storing your personal belongings for a day tour is a challenge. Solving the problem in an uncomplicated way is still a unique feature of the Honda NC 750 X today, nine years after its debut: the dummy tank is open, everything is in, the lid is closed, and off you go – for a carefree trip without bulging pockets. Admittedly, this is not really a new feature, the spacious storage compartment has been around since the market launch in 2012, but the ingenious solution is still innovative. The motorcycle rightly still bears the name NC – New Concept – today. For model year 2021, Honda has enlarged the compartment, it now holds an XXL helmet.

Further innovations: The undisguised variant S disappears, what remains is the already popular road enduro Honda NC 750 X, of which a good 1,400 units were sold in Germany last year. Honda trims them back to pure asphalt operation and shortens the suspension travel to 120 mm. No need to worry, their off-road qualities were limited anyway, and the design is still sufficient for dirt roads. A pleasant side effect for shorter riders: the seat is lower due to the shorter spring travel and is now only 800 mm high.

The revision of the two-cylinder in-line engine went well. Four horsepower growth and a newton meter more torque may not sound like much, but in combination with the shorter gear ratio of the first three gears, they are definitely noticeable. The twin, which imitates a V2 with its 270 ° crankshaft, accelerates better and revs up quickly. So it sprints amazingly fast over the mountains and hills of southern Tuscany, where the test drive took place. That should only be about 60 hp? Hard to believe. Since the technicians also reduced the maximum speed by 600 / min. increased, the Honda NC 750 X no longer runs constantly into the limiter, which earlier turned out to be a bad fun brake. Whether this is the same in the variant with a clutch cannot be judged with certainty; For this first exit, Honda provided an NC 750 X with the DCT dual clutch transmission, and it shifts up automatically as soon as the red area approaches threateningly. Because the X creates a decent speed even on the autobahn (speedometer approx. 185 km / h) without protesting, accelerating to the limit should be stress-free, even with the clutch.

According to Honda, 55 percent of all European customers buy the NC 750 X with the DCT automatic transmission. It has been revised for 2021 and linked to the new driving modes so that it is sufficient to set the desired mode – Standard, Sport or Rain – and the DCT then ensures the correct gear selection. Or at least it should: In the case of tight turns in quick succession in the Tuscan mountains, it interconnected every now and then, at least according to the tester. Since Honda is the vote SUV scooter X-ADV, which is based on the same platform is better done (MOTORCYCLE 7/2021). Basically, even skeptics get along well with the automatic, because it can also be shifted manually on the left side of the handlebars, which enables lightning-fast gear corrections. Overall, the DCT, which Honda has been constantly refining for ten years, appears very well-engineered, it shifts silently and usually without jolts. The surcharge for the ten kilogram DCT is 1,000 euros.

So it is just right that the developers saved pounds elsewhere, for example on the engine and frame; with DCT, the Honda NC 750 X now weighs 224 kg. The gathered seating position, the low center of gravity and the large steering angle make it easy to make friends with her. She takes all kinds of curves by herself, not even the unexpected and tricky hairpin just before the tufa town of Pitigliano spoils her rhythm or the tester’s mood. The fact that the telescopic fork with 41 stanchions is rather thin and that the damping of the chassis cannot be adjusted is not noticeable, because the successful basic set-up largely ironed out bumps in the asphalt.

Even doing without a double disc at the front does not bother, even with hard braking maneuvers the Honda NC 750 X does not burn anything – and now automatically switches on the hazard warning lights to prevent collisions. Good decision: Honda now uses the Metzeler Tourance Next instead of the earlier Dunlop tires ex works, which improves the steering behavior.

The Honda NC 750 X prefers to be moved in harmony, with brutal gas tearing and rude braking in the turmoil of curves. Loose gliding, on the other hand, rewards you with a smooth swing. On the plus side are the good feedback, the stable cornering, the easy handling and the frugal consumption, which according to Honda is 3.5 liters. A decent motorcycle? Most certainly. Because the 2021 version is significantly more fun to drive, reason and pleasure can now be combined better than ever before.

The Honda NC 750 X is still not a show bike, but there are too many of them anyway. With the more powerful engine and the shorter gear ratio, it gains temper, and because it no longer constantly runs into the limiter, even driving on passes are pure joy. It is practical anyway with its storage compartment and frugal consumption.