Introduced year after the Yamaha 500 RDLC and at the same time as the RG 500 Suzuki, Honda unveiled its 2-stroke replica in 1985: the NS 400 R. If it offers less displacement and raw power, it reveals a homogeneity lacking in his rivals. No doubt, the NSR is indeed a pure Honda ! 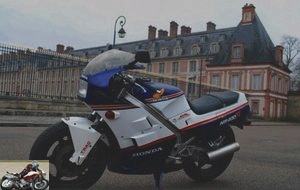 Dressed track and scented Grand Prix, the 3-cylinder V differs from the racing one by the inverted arrangement of its cylinders. On Spencer’s NS 500, two cylinders are placed vertically and one horizontally. It is the opposite on the NS 400 R to improve the tank capacity. Undoubtedly a beautiful motorcycle of its kind, only the license plate seems incongruous on such a machine …. 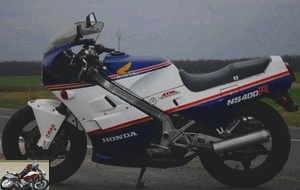 The saddle offers good comfort, as do the half-handlebars which are not too brittle for the wrists. The legs are bent just enough, not excessively. Honestly, we could swallow 400 kilometers without fatigue aboard the Honda.. 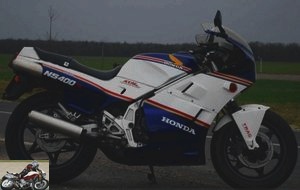 The old-fashioned dashboard relies on the traditional hands, one for engine speed, one for speed and the last for water temperature, which is essential on 2-stroke. The rest of the lights are grouped together on the triple clamp. 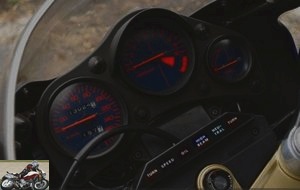 Contact. A good jerk starts the 3-cylinder which stabilizes on idle in a discreet, but pleasant sound. A few bursts of gas spout swirls of blue smoke. Now is the time to take a deep breath and forget, for a moment, the Euro 3 standard, the catalysts and the talk about inhaling good alpine air …. 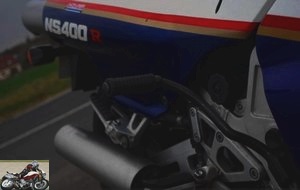 The low weight of the motorcycle (163 kg dry), allows you to twirl in urban traffic. In addition, the driving position, rather relaxed, spares lumbar and other delicate bones. Certainly, a machine of this ilk is not intended to beat traffic jams, but when it is forced to, the NS 400 R bends wisely to the exercise. 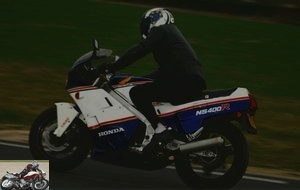 Up to 4000 rpm the bike purrs gently and moves forward without much being asked. Rather hollow at the bottom, the 3-cylinder lacks fuel at mid-range despite the ATAC, a system located at the exit of the cylinders modifying the exhaust diagrams according to the engine speed. This allows for better uptime without sacrificing very high revs. When the temperature indicator warns that the boiler is hot enough, you can go there with joy ….

Handle in the corner, the engine gently takes its revs from 5,000 to 7,000 rpm. It changes its face at 7,500 rpm. In good self-respecting two-stroke mechanics, the three-cylinder rushes towards the red zone while its sound becomes more strident. The red zone starting at 10,500 rpm, that leaves 3,000 rpm of happiness. When the road turns, it becomes a real treat !

Thanks to a homogeneous and efficient chassis, the NS 400 R holds the road ahead of its time. For a machine that appeared in 1985, this commands respect. Straightforward on the angle, the NSR enters a single block curve without breaking up. Stable and correctly suspended, the bike delights its rider who can put on gas without being afraid. When coming out of a bend, you can screw on the handle without fear, as the engine is not aggressive enough to undermine the serenity of the frame. Best of all, the liveliness in the rapid changes of angles is appreciable …. 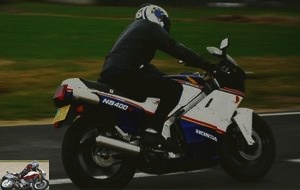 With the nose hidden behind the fairing bubble, the turbulence does not affect the pilot. The NS 400 R holds the course perfectly even at very high speeds. No risk of fatigue, on the other hand very high consumption at high speed requires frequent refueling stops! At constant speed, no tingling to report. In addition, streaks and bitumen joints are swallowed without the slightest disapproving reaction …. 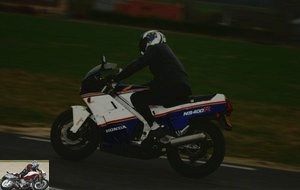 Perfectly, two can ride on the back of the NS 400 R! But better to be placed in front. The passenger has nothing to hold onto and the knees are almost at jaw height. The gas mask is not in the catalog of options, the smell of the transported is also very roughed up by the particular hints of the two-stroke engine …. 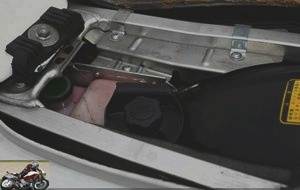 If the feeling at the lever is correct without more, the bite and the power are sorely lacking. The anti-dive system (TRAC) supposed to contain too much depression of the fork, is more of a gadget than an interesting technical solution. Morality, it is better not to be forced into emergency braking …. 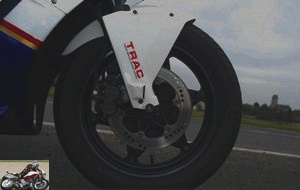 Three cylinders with holes = fierce appetite! Even if you stay calm, this "Spencer Replica" needs a minimum of 10 liters to cover a hundred kilometers …. 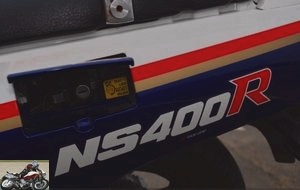 The NSR requires extensive and regular maintenance to perform to its full potential. According to Honda, the service interval is 6,000 kilometers with a major maintenance at 36,000. change every 18,000, the brake fluid also (or 2 years) and the cooling fluid every 36,000 (or 2 years). The air filter is checked every 6,000 and changed on time. 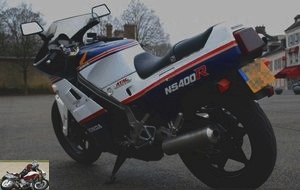 Although engine wear will vary depending on how used it is, replacing the pistons every 15,000 km is a good starting point. The segments are obviously to change too. The descaling must be done every 12,000. The oil pump, which is responsible for mixing, must be inspected every 12,000. Finally, it is also necessary to ensure the proper functioning of the ATAC (Auto Controlled Torque Amplification Chamber) system. , if it seizes up the engine will no longer give its full performance. 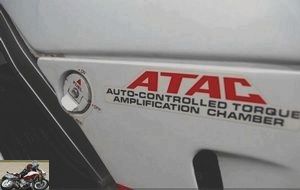 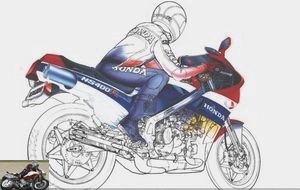 Between 1985 and 1987, Honda France announced that it had registered 562 motorcycles. Even if we add the imports made afterwards, especially from Japan, there were probably less than 800 NS 400 R present in France.. 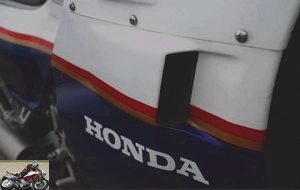 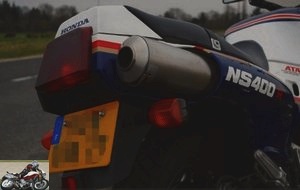 Less sought after than a Suzuki RG or a Yamaha RDLC, the Honda has nevertheless seen its prices rise in recent years. Having become rare and expensive, the NS 400 Rs are not legion on the market and prices range from 3,000 to 7,000 € depending on the state.. 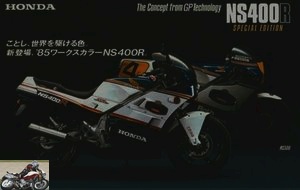 In case of purchase: advice

Better to focus on a motorcycle in good condition, rather than embarking on a risky and necessarily very expensive restoration. Even though the bike looks good, it is worth taking a close look at the exterior. The trim pieces age quite poorly, as does the paint. Pay close attention to missing parts, the fairings are not easily found. The motorcycle must have an up-to-date maintenance book or numerous invoices. Even better if they come from a recognized two-stroke specialist.

Did the owner do everything himself? Mistrust. Even with goodwill, mistakes could be made. Considering the price of the cylinder / piston couple, it is better to avoid tightening. After the purchase, a thorough check of the motorcycle will not be superfluous. During the dynamic test, the NSR should start smoothly and stabilize at normal idle. All three exhausts should smoke cold blue. When hot, a hand in front of each pot indicates whether the cylinders all “give”. Otherwise, the carburation or ignition may have a fault. The engine should run perfectly. Any carburizing problems can cause tightening if the setting is too lean. The second gear, a recognized weakness on the Honda, must not jump even when accelerating fully. Distrust, spare parts are more and more difficult to find. Honda provides little and some have been out of stock for a long time….

Homogeneous, efficient, we can just regret that this NS 400 R is not more pungent. Apart from its perfectible braking, the Honda holds the weight of the years perfectly and suffers from no flaws, apart from this tendency to have been too well bred. !