Big wheels, lines and Italian style, the SH has been one of Honda’s flagship scooter lines since 2001, with over a million units sold. Honda today unveils the 4th generation of the 125cc model, also available in 50, 110, 150 and 300cc versions. Particularly sold in Italy (242,722 models 125 in the world), it is also there that the model was completely redesigned, while the engine remains manufactured in Thailand. But behind the new line lie much deeper innovations, particularly in terms of frame, engine and braking … Because the SH 125 benefits from a brand new ESP (Enhanced Smart Power) engine, with Stop & Go function (automatic cut-off and restart). “Idling Stop”), based on the PCX125. Lighter thanks to weight savings achieved everywhere, more economical with the new engine (consumption is announced at 2.2 liters / 100 km), Honda also announces better performance. The power goes from 8.7 kW to 11Kw at 8,250 rpm and the torque from 11 to 14Nm at 6,500 rpm. So, can the Italian star now also conquer the hearts of the French? Test in Rome… 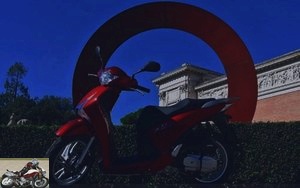 From a distance, little distinguishes the old and the new SH whose lines retain a family resemblance, especially with the large 16-inch wheels, a flat floor without a central beam and a long and apparently thick saddle. Up close, the differences are obvious. 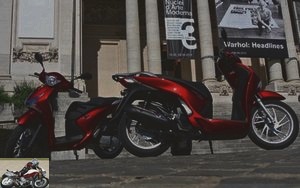 The front is much thinner and slender, thanks in particular to the disappearance of the radiator, passed to the rear and positioned directly on the engine. The headlight takes a shape close to the VFR with LED lights in 4 lines, while the fairing incorporates a cutout reminiscent of a pendant. There is now more legroom in the center with a flat, beamless floor. At the rear, the lights are thinner and draw a V in motion. The five-spoke wheels have evolved into 10-spoke wheels or more precisely 5 split-sticks. The most attentive will notice details such as the SH logo on the bulb of the headlight bulb or the SH marked in the mass on the tank, under the saddle.. 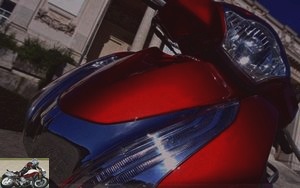 Beyond the aesthetics, the new engine has been designed to consume less, thanks to the ACG starter and stop and go, allowing the engine to be cut at the first red light and restarted automatically afterwards. The electronically controlled alternator replaces the starter and also produces electricity, eliminating the need for the conventional alternator and its freewheel mechanism. The radiator, more compact, is now placed on the right side of the engine, lower, contributing to an overall lowering of the center of gravity. The saddle has shrunk and the frame has been modified to offer more space in the center: all this allows to have a real trunk under the saddle and the possibility of placing a large modular. Lighter, the SH weighs only 134 kilos (135 kilos with ABS), this weight loss also having an effect on the decrease in consumption. With a new mapping, the whole thing also offers more nervousness at startup. In the end, we appreciate the high level of overall finish and the quality of the metallic paint, the most beautiful effect especially in the red color. Black and white will also be in the catalog … or even gray in the event of high demand; this last color is not currently available in France. 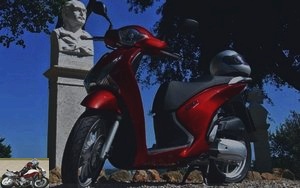 No beam to step over, you can easily place yourself on the saddle, relatively high at 799mm but thin, which means that the 1.70m pilot puts his feet on the ground. On the other hand, with a very low weight and a fairly wide handlebars, you have the impression of being on a bike. The new dashboard then offers itself before the eyes, quite imposing, with a central analog meter (displaying a presumptuous 160 km / h), an engine temperature indicator on the left, a fuel gauge on the right and a digital display. with totalizer, partial double trip and clock. It is just placed low enough to the eyes and looking at it really requires lowering your head.. 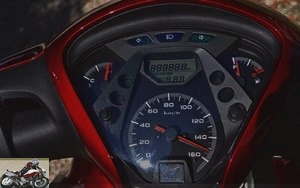 Brake tight and crutch folded, the engine snorts with a very discreet low noise. A green light lights up on the left indicating the stop and go functionality … We turn the handle and the scooter reacts instantly with real nervousness and momentum when starting, without latency. 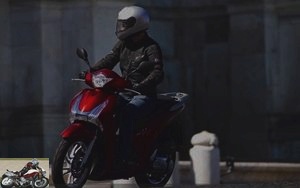 The SH 125 weaves its way naturally and easily through traffic. With a very short turning radius and really easy turning handlebars, it drives like a bicycle. Very responsive to the handle, it soars with vivacity. And at the next traffic light, the engine shuts off automatically after 3 seconds, leaving everything in complete silence. The light turns green ? You turn the handle and the scooter instantly takes off as if the engine had not been switched off. Impressive and really enjoyable on a daily basis. Note that the system only comes into action when the engine has reached an operating temperature of 60 ° C and 10 km / h has been crossed at least once. In practice, the system is functional after a few hundred meters. 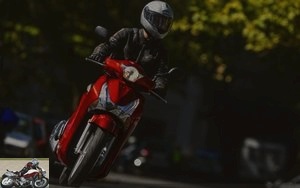 The braking is up to the task, offering progressiveness and ease, especially with the ABS which only comes into operation by really only and violently activating the rear brake. Please note, if only the ABS model will be marketed in France, there is also a non-ABS model which offers combined braking. The ABS model does not offer combined braking, for reasons of space of the system, installed in this case in the front apron and occupying only a few centimeters. 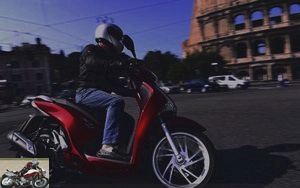 The SH sets off well up to 70 or even 80 km / h then takes its time to climb regularly then in the laps … up to 100 km / h if it climbs a little and 117 km / h (counter), well launched and slightly sloping. We then feel the breaker. However, it offers healthy and stable behavior, even on bad road connections. Despite the absence of a bubble, there is no particular pressure on the chest or on the helmet, making the speed easily maintainable. 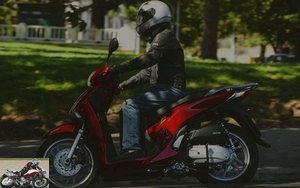 With a limited top speed for the motorway, the SH finds more readily the departmental where it can then investigate with elegance the virolos, even a little tight. Everything slips on easily and quietly. And with gentle pick-ups beyond 70 km / h, we then take the time to admire the landscape while the counter needle climbs quietly.. 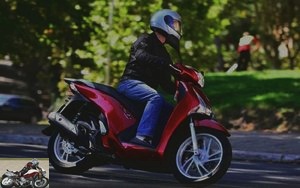 The saddle offers a good thickness of fairly firm foam. The double rear shock absorber, even adjusted to the most flexible (on the 5 possible positions) does not appreciate that the road deteriorates. On French city roads, comfort is there. On the particularly violent potholes of Rome, we can feel that the road has suffered and we must be careful to avoid road defects.. 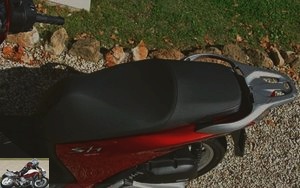 The braking is largely at the height of the inclinations of the SH. ABS is safe and minimally intrusive. You really have to take the rear brake hard only to get it into action and even there, the behavior of the SH remains healthy. The power is very progressive with a good feeling.

Announced at 2.11 liters per hundred, at stabilized speed, the HS did not see a first change in the position of the gauge until after 65 km and reached the first graduation only after 80 km. Without being able to drop as low in urban consumption, consumption should be around 3 liters per hundred (to be checked during the long-term test) which should then offer a range of 250 kilometers with the 7.5 liters of the tank.. 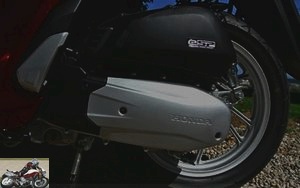 A small storage compartment, without key, is available at the front on the left, for a mobile. It is especially the size of the trunk that impresses on a 125 with the possibility of placing a real and large modular without worry. 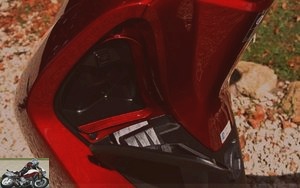 In the chapter of details, we will note a protection of the rear wheel, in addition to the mudguard, which should protect the passenger very well from splashing water in the event of rain..
The tool kit positioned under the saddle offers a few keys, a cruciform and above all a specific key to adjust the position of the shock absorber very simply and without particular effort (a real plus compared to the old model).
A well-finished top case (with and without backsplash) is available as an accessory and elegantly completes the line.. 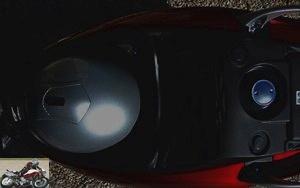 The HS must be revised every 4,000 kilometers, for a simple oil change. The belt is changed when the 16,000 km service is overhauled. With a very small tank of 0.9 l of oil, the only point of attention lies in checking the level (and topping up between oil changes) in order to avoid dropping below 0.6 liters. With these simple checks, the engine can cover 80,000 kilometers without worry…. 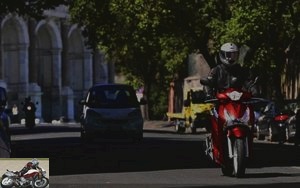 Elegant, economical, offering excellent protection (and even more once accessorized with high screen and hand guard), the SH allows you to discover the pleasure of the stop and go system. We then wonder how we have been able to do without it so far in view of the comfort provided, without forgetting the savings made. Only its limited top speed will confine it to purely urban use. With a price of 3290 euros, identical to the previous vintage but now benefiting from the original ABS and TopBox in the color of the vehicle, it then offers a real alternative to the usual massive scooters, especially since this type of model is hardly ever stolen.