The Silverwing is the Honda maxi-scooter,
a twin-cylinder of 582 cm3, initially released in 2001. It has since this
date very little changed … because we do not change
a winning model? In any case, it offers the whole experience
Honda automobile to offer a large urban scooter and designed
conveniently and safely thanks to ABS. 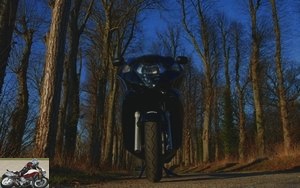 Honda did not hesitate to refer
to the Goldwing for its scooters – Xwing for the 125 –
SilverWing for the 600, thus symbolizing road skills
and the promises of comfort. 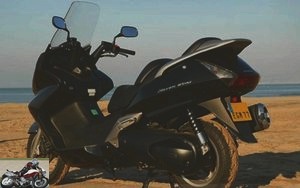 In fact, the SilverWing stands out with its double front optic
and a prestigious side trim, especially in its livery
black. Its length of 2.26 m impresses. The wide saddle with backrest
for the pilot as well as for the passenger, equipped with long
handles, confirm this feeling of comfort. 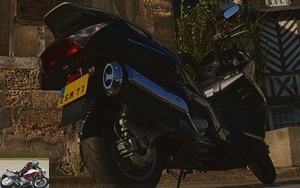 Seated, the feet are flat on the ground for the pilot
of 1.70 m. The scooter is easy to handle when stationary
with the feet, same engine stopped. Mirrors
offer a good field of vision. 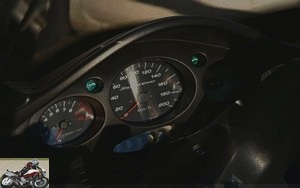 The analog meter block is reminiscent of the interior
of a car: speedometer, fuel gauge
eight sticks, tachometer, clock, partial double trip and totalizer.
On the other hand, there is no warning. 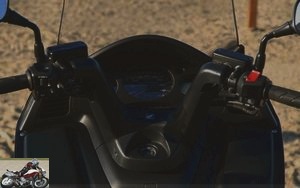 On both sides, two important trinkets, one of which
locks, allow the pockets to be distributed.

Double trigger and side safety
rear brake (left handle), and the SilverWing snorts
in a soft purr. No speed here, but an automatic gearbox
100%.

The feet find their place on either side of the axis
central, either perpendicular or far in front. 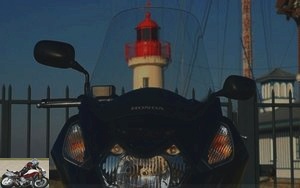 The byclindre – without vibration – is rather dynamic in town,
offering good acceleration, very
flexible, especially thanks to the V-Matic belt.

The steering is very light and responsive, offering
extreme maneuverability when stationary and at low speed
as well as an excellent turning radius.

The narrow template of the SilverWing then allows you to sneak
everywhere including in the smallest mouse hole.

The scooter takes an angle immediately and without difficulty,
turning the two-wheeler into a real game. 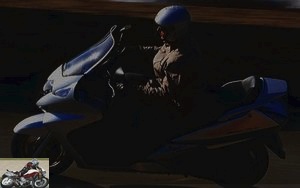 The SilverWing voluntarily sets off on the highway
and offers good pickups within the legal speed limit.

Beyond that, the scooter accelerates linearly
up to 160 km / h then takes time to titillate the
170 km / h, even if the engine roars furiously during this time,
with a not insignificant pleasure for the ears. The SilwerWing
amazes when you think that it officially only has
of 49 horses. His behavior remains healthy at these online speeds
right. On the other hand, he does not appreciate the slightly degraded surfaces in large curves, punctuating the navigation with a swaying behavior that is not very reassuring..

Above 110 km / h, the bubble generates a significant noise
in the helmet. Smaller sizes can then curl up
behind the bubble to make practically everything disappear
noise.

At these speeds, the pilot’s body is well protected, the
only legs being affected by some side eddies
not annoying. The passenger is a little worse off, the legs
not being as well protected at the back. 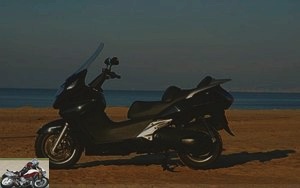 Back on departmental roads, the SilverWing also winds up
gladly. It absorbs faults particularly well
of the roadway and provides real driving comfort, both
solo than in duet. On the other hand, he does not appreciate
poor roadway connections between lanes. Suddenly, the changes
of rapid angles with a poorly connected road lead to
some waddle. Under these conditions, the hand is quickly returned:
the SilverWing wants to roll even at high pace
more than sporting rage. 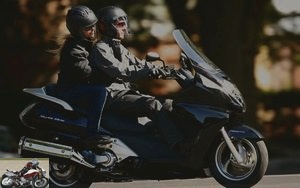 The passenger is very close to the pilot. The advantage is that there
has no eddies in between, even at high speed. The seat
is good and the backrest supports both rider and passenger well.
The handles are well placed.

The passenger has two footrests, tapered and design that
fold perfectly into the fairing when there is none
need. The toe clips are roughly at the same level
than those of a motorbike, and the way of riding is similar.

The SilverWing brakes hard and hard right away … luckily helped
by the ABS, thus protecting against any skidding. The behaviour
remains very healthy, even in the case of heavy braking,
without lift-off. 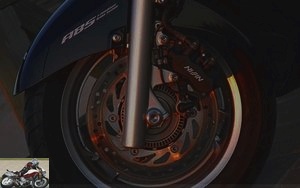 The last of the 8 sticks usually starts at
flash towards 200 km. There are still about thirty kilometers left
before actually triggering the reserve. The SilverWing
thus sees its consumption vary between 5.7 liters (mini) and 7 liters
to the hundred.

Note that the central filling is a real plus, both
aesthetically and practically to ensure a filling
full tank.

With its 16-liter tank, the SilverWing offers autonomy
average of 240 km, just in view of its driving possibilities and comfort. It clearly deserves greater autonomy. 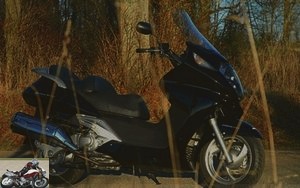 The trunk – illuminated from the inside by
one light – is huge and gladly houses two integral
with still room for a lock and at least one combination of
rain. You can also accommodate a full and a good big bag with
all you need for several days.

On the practical side, we will not forget to close the
saddle. Because even the keys removed, the lighting lamp
interior stays on … to empty the battery
in less than a day. Fortunately, the battery is easily
accessible in the trunk: one screw, two terminals and we recharge.

Despite its 247 kilos fully loaded, the SilverWing moves
very easily at a standstill, thanks to
at a very low center of gravity. This is true that
you are sitting on it or in a stroller in the garage
or even to the nearest station. 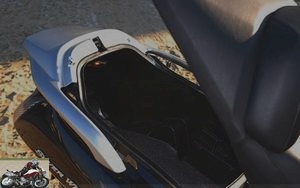 Easy to handle, comfortable, the SilwerWing is a success
at the aesthetic level in the luxury and rewarding scooter category. It allows beyond
urban routes, real weekend getaways,
aided by a large trunk, which can easily accommodate whatever
must for a long weekend. Its effective braking, completed
by ABS, ends up providing security on a day-to-day basis. It offers real driving pleasure,
bobo way, with a very cast style. 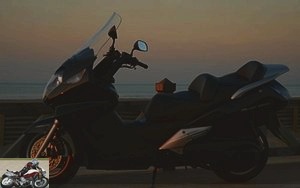