Disappointing in a traditional gearbox, it seems that the VFR 1200 with double clutch takes all its measure with the automatic selection. In this livery, the machine is more than convincing.

It’s always confusing to change your ways. No clutch lever, no more than a selector. No question for the VFR to propose to act as if. When Honda decides to go automatic, it’s not to sell a shifter. So we do as in the car, we start and we put the “stick” in Drive mode. There, it is a simple button pressed by the thumb which locks its action by showing a D on the liquid crystal dial of the instrument panel. So on the way. 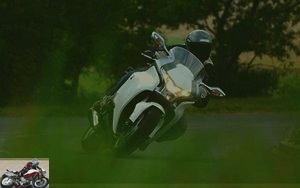 The left foot no longer knows what it is for. He hesitates to land on the footrest, still moves out of habit. But the conditioning evaporates very quickly, as the pilot’s ear is surprised by the sudden mechanical noises more than desired. The soft hand, the reports follow one another at the approach of 2,500 rpm. One, two, then three, the mechanics seem to be borrowed from the Bavarians who do “klonk” at each gear change. And then more noise. As on a flying carpet, the four, five and six pass like flowers delivered at high speed, always at 2,500 rpm, with the incredible audacity to cross at 65 km / h in sixth. 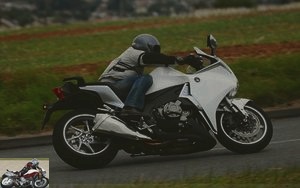 It is on this range of use that the “normal” VFR was a little hollow, that is to say before the 4,000 rpm. There, with the automatic gearbox, the engine has not changed, but the smoothness of the mode changes the pilot’s expectations in terms of displacement. We no longer seek the attack or the rage of a V4, but fluidity. If we played with the muffler which modified its sound at 3,500 rpm, releasing a few decibels at this stage, we no longer ride the same machine. What immediately stands out is the very symmetrical position that allows the absence of gesture to provide. The left foot no longer being used for anything, it is pressed against the frame of the machine, like a vulgar right foot. In fact, the pilot feels more perceptibly the chassis that transports him.

Very quickly, we get used to this new gearbox, gentle in its downshifts, voluntary in its go-around, manly when the needs of the traffic dictate it. In D mode, the VFR will prefer a cast style which perfectly matches motorways or large expressways, urban journeys where the rapid change of gears is very relaxing for the pilot as well as for his environment.. 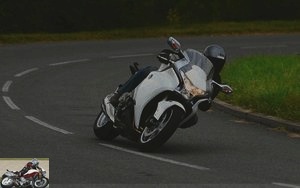 As for more sporty journeys of the departmental or national twisty type, it is the S mode for "sport" which seems the most suitable. And not just to attack. There, the reports cross the borders of 5,000 rpm. That’s 1,000 rpm higher than the ugly trough of the V4 and about halfway through. It is obviously necessary to take the risk of crossing at 145 km / h to pass the six, which is not an obligation. 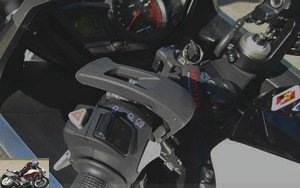 At any time, whether the mode chosen is D or S, a trigger located at the left index finger / left thumb allows you to fall or shift a gear, its symmetrical, right index finger, will enable the initial mode to be reset, knowing that the trigger sequential keeps priority over any other mode.

Returned to S mode, the true mechanical face of the VFR can be expressed. It turns out to be more pleasant and also very suitable for road use and even sunk for those who do not like to change the attitude of their machine by taking the brakes too often. The fact of being systematically beyond 5,000 rpm, allows, when approaching a bend where you decide to release the throttle, to shift down a gear. This downshifting gives the real sensation of pulling the rear wheel towards the rear of the machine. A modification of the distribution of the masses which facilitates the placement on the angle. Still at over 5,000 rpm, the engine will have no trouble helping the rider pull the machine out of its curve by delivering the right amount of power. And so on if the road has been well chosen. 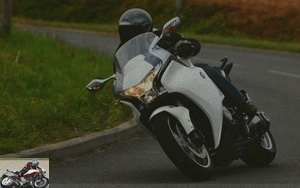 Because you have to deal with a heavy machine weighing 277 kg, which the automatic gearbox system has increased by around 10 kg on the scale. In dynamics, the difference is not obvious. In any case not disabling to prefer one more than the other. What can tip the balance of the most reluctant to progress, those who will have the impression of having a scooter disguised as a motorcycle rather than the latest in technology, lies in a few fine-tuning.

First, the first three gears are a bit noisy. Then, like other motorcycles that are not equipped with automatic transmissions, the VFR 1200 tends to hiccup when the engine is not under load, especially in town and in D mode where the engine hesitates at low speed. The solution of mode S or the sequential trigger can very quickly remedy this. It is this same mode which will be able to remove from the mind the fear of downshifting to first just before a hairpin in town and of setting off again on eggshells rather than in a slight underdrive, on rainy days. It is never very natural indeed to pass the first gear, which the automatic transmission allows itself. To do this, you will first need to become familiar with the unusual amount of functions vested in the left hand..

We no longer know which finger for what. The left thumb is strained and sometimes honks its horn that it should activate the turn signals, shifts a gear when it wanted to call the headlight, above the hazard lights. Habit should overcome these inconveniences. 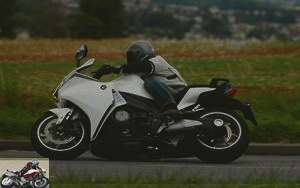 For the general philosophy of the machine, we hesitate a bit. Very road on paper with its displacement of 1.237 cm3, its gimbal and its automatic transmission in the cushy image, the VFR 1200 is not comparable to a Yamaha FJR 1300. 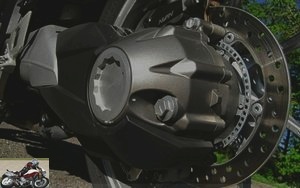 We saw it more sporty, especially with this gearbox which removes the stewardship of the clutch and the selector. Therefore, the more free spirit, the pilot can concentrate only on the next turn, the new curve to be embraced. His left leg no longer interferes with the balance of the machine by parasitic movements. It is not a GP motorcycle but we are certainly in communion with the chassis of this motomatic whose staging of the S mode is particularly successful for a removed use. On the attack, the sequential mode is formidable in terms of speed. We really discover, and in the comfort of a road saddle, a new way of riding a motorcycle with an automatic gearbox that we would like to see fitted to the most incisive of cycle parts. Like the ABS which appeared on the CBRs. 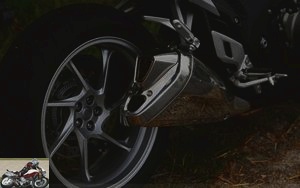 Honda may have made a mistake by first presenting the VFR in traditional mode. Mistreated in its presentation in a mechanical gearbox, the real face of this machine is that of the automatic mode. If the 1200 changed the category of the VFR line, it is undoubtedly this new philosophy that can pull the model upwards. If the system can still be improved in terms of noise for the first three reports, it is very convincing in use, and particularly in S mode for sporty road use. It erases, without the pilot never realizing it, the hollow before the 4,000 rpm of the selector version. To deliver a chassis above all suspicion, well served by reassuring and efficient braking. With a gimbal and comfort. In short, a real Behemoth. To € 16,290.

available in red, black and white

Note: In addition to the choice of an automatic machine, Honda is also paving the way for motorbikes without major transformations for road accident victims. One-leg amputees or other handicapped people will surely welcome this new machine, which requires only € 1,300 more than its standard version to offer an automatic mode. Combined braking provided with ABS, present as standard, completes the picture. And perhaps will allow resigned sidecar riders to taste again the pleasures of solo motorcycles. That’s all we wish them.