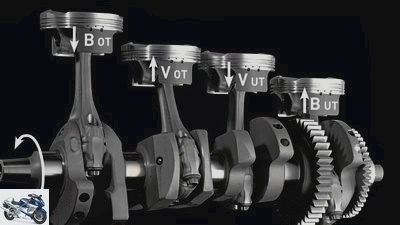 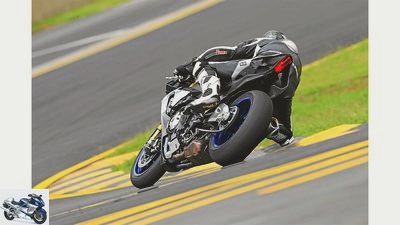 1/7
In PS 7/2015, reader Gerrit Hawich asked about the function and background of the Yamaha R1 engine with crossplane crankshaft. In order to work out the differences and similarities between the Big Bang and Crossplane in detail, PS adds one more time and tackles the topic of ignition delay and torque of the most varied of engine concepts. 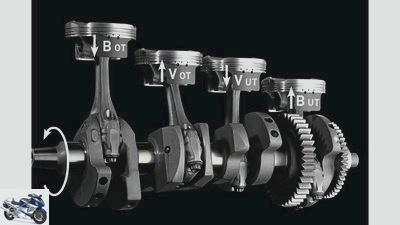 2/7
Yamaha crossplane crank drive: The acceleration of a piston (B) is always offset by a piston offset by 90 degrees, which is decelerated (V). This balance of inertia (B) and inertia force (V) enables a uniform torque with the lowest secondary inertia forces. 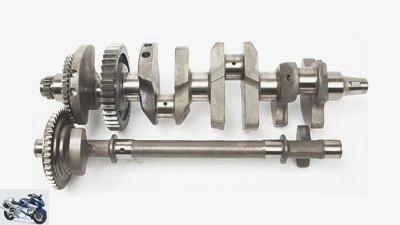 3/7
In order to achieve a smooth-running mass balance / mass moment, two counterweights rotate on the Yamaha R1 engine in front of cylinders 1 and 4, which work opposite to the crankpins, while the mass forces of cylinders 2 and 3 largely cancel each other out due to the 180-degree offset. 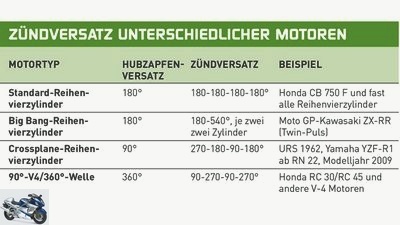 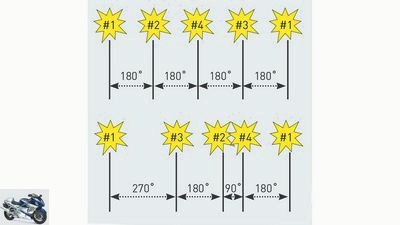 5/7
Above are the firing order and the firing intervals of a conventional inline four-cylinder engine with crank pins offset by 180 degrees. Since a four-stroke engine only fires every second crankshaft revolution (720 degrees), the four-cylinder work strokes are distributed over half a revolution (180 degrees). The crossplane motor (below) with its crank pins offset by 90 degrees is designed so that the ignition intervals are irregular. In the firing order of cylinders 2 and 4, the distance is shortened to 90 degrees, which leads to a superimposition of the working pressure (torque peak, big bang). 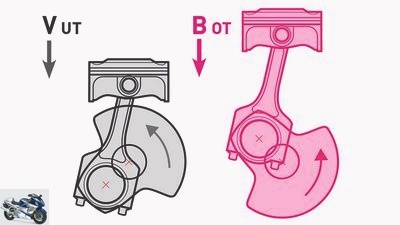 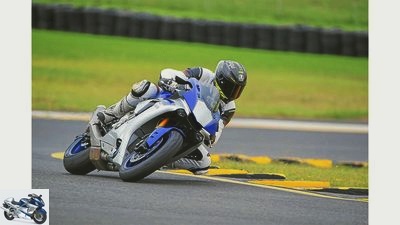 7/7
It was not only Yamaha who recognized the advantage of the crossplane concept with the Yamaha YZF-R1. But at the beginning of the 1960s, Dr. Ing.Peter Kuhn, who designed the 500 URS racing engine together with Helmut Fath. The elaborate four-cylinder racing engine caused a sensation and an infernal soundscape in international racing at the time. Power back then: around 85 hp at 13,000 rpm.

In PS 7/2015, reader Gerrit Hawich asked about the function and background of the Yamaha R1 engine with crossplane crankshaft. In order to work out the differences and similarities between the Big Bang and Crossplane in detail, PS adds one more time and tackles the topic of ignition delay and torque of the most varied of engine concepts.

“Crossplane is not the same as the Big Bang concept”, commented Yamaha press man Karlheinz Vetter on the technology article in PS issue 7/2015, referring to the asymmetrical firing intervals of the Yamaha R1-Motors, whose identical crank pin offset also fires the factory MotoGP-M1 – or rather the other way around: The Yamaha high-volume engines built since 2009, abbreviation RN 22, benefit from the knowledge of the racing department in Iwata.

The basic idea why Yamaha deviates from the usual 180-degree crank pin offset of an in-line four-cylinder lies in the uniformity of the so-called secondary inertial forces. I beg your pardon? Secondary inertia forces are the forces that occur in gasoline engines when the piston and a certain proportion of the connecting rod are braked before the top or bottom dead center. Enormous forces occur depending on the speed and weight of the oscillating masses. Example: At 12,000 rpm, the piston of a 1000cc four-cylinder has to be braked to zero at around 110 km / h within half a crankshaft revolution (around 25 mm stroke).

With this extreme deceleration, the oscillating piston achieves a dynamic inertia force of around 6300 Newtons, i.e. a weight equivalent of more than 640 kilograms and thus around 2500 times its own weight. This free inertia force causes a turning force on the crankshaft, which, however, cannot be controlled in comparison to the gas force of a combustion.

In the case of a crankshaft with a crank pin offset of 180 degrees, these inertial forces are quadrupled because the pistons that rise and fall in pairs are braked two before the bottom dead center and two before the top dead center. The result: unwanted, strongly pulsating torque peaks on the crankshaft.

PS reader question: what is a dog ring gear?


The basics of chassis tuning

Instructions for trying it out

Tips for mechanics for the motorcycle

It is different with the Yamaha crossplane engine: There the crank pins offset by 90 degrees almost cancel out these torque peaks and inertial forces, since every “braking” action of the piston is counteracted by the “acceleration” action of a piston shifted by 90 degrees. So here every mass force is opposed to a mass inertia at the same time. This is a great advantage, especially for crankshafts with low flywheels, in order to increase the uniformity of the rotary motion. In this way, the flywheel mass can be reduced in crossplane motors. However, the crossplane system has little effect on the entire power and torque curve of the engine.

Yamaha expects the balanced secondary inertia forces to improve the controllability of the power on the rear wheel, as this is only determined by the gas force of the more or less powerful combustion (depending on the throttle valve position). This uniform power output comes into play when the driver accelerates the engine in a maximum lean angle, a tightrope walk between smooth acceleration and nasty highsider, which is safer thanks to the predictable power output to the rear wheel. This performance is of course also supported in the new R1 by an extremely sensitive and complex traction control.

Another advantage compared to the conventional 180 degree offset: the asymmetrical ignition offset of the crossplane system can also suppress annoying vibrations in the drive train, which build up to a natural frequency with symmetrical ignition offset and can trigger violent vibrations in the vehicle when coasting. These vibrations often end in so-called chattering, a very unpleasant jumping from the front or rear wheel to which the tire and chassis technicians are often helpless.

Mass balancing is worsened by the crossplane crankshaft

What is made worse by the crossplane crankshaft, however, is the mass balance, which leads to strong vibrations and is therefore softened by a balance shaft in front of the crankcase. The counterweights sit on this shaft exactly in the longitudinal axis of cylinders one and four in order to eliminate the moments of inertia that occur there. In addition, the crossplane ignition sequence requires a lower exhaust gas back pressure in the muffler, i.e. less resistance, which is primarily only achieved via a larger exhaust volume if the noise regulation is complied with.

And what about the big bang with the crossplane engine? There is also one, but only with every second crankshaft revolution, when after cylinder number three cylinder number two ignites at a distance of 90 degrees and the working pressures partly overlap, which ultimately also creates the rough, throaty sound of the R1 engine. However, the crossplane principle is not as new as it looks at first glance. The URS four-cylinder racing engine by Helmut Fath and Dr. Ing.Peter Kuhn, for whom the roller-bearing crankshaft was equipped with four crank pins offset by 90 degrees. And also the sound of the URS, with which Helmut Fath became world champion in a team in 1968, made your neck hairs with the hellish sound and without any silencers.