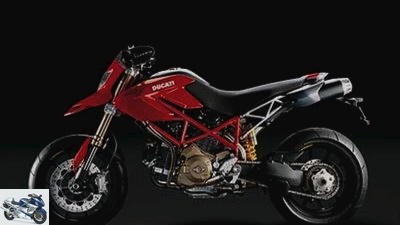 Innovations 2006 at the Milan fair

Innovations 2006 at the Milan fair
License to thrill

The last covers for 2006 fell at the Eicma in Milan. Ducati presented the “Hypermotard” high voltage on two wheels ?? and BMW continued with the novelty fireworks.

Mr. Stoffregen, BMW presented the R
1200 S, the F 800 S, the F 800 ST and the K 1200 GT four new models, after the K 1200 R, the R 1200 RT, the HP2 Enduro and the R 1200 GS Adventure had already been presented. Is it possible in
this pace continues?
If you add the models shown in Milan for 2006, we have presented eleven completely new motorcycles in just two years. The new K generation is now complete, and with the exception of the roadster, the renewal of the boxer series has also been completed. In 2006 we then have four series, the technical basis of which opens up additional, attractive possibilities for us. The model offensive is not over yet. Maybe we will reduce the number of bars a little.
Technical data, details or even prices are not yet available for three models. Is this the official BMW marketing strategy, or are more major changes to be expected in the models?
No, the models come as shown
became. However, trade fair dates and internal planning cannot always converge, so it is sometimes unavoidable that the final determination of dates and prices only takes place after a trade fair.
The new R 1200 S will be available from dealers in Germany from spring. This also applies to the F models and the K 1200 GT?
For the R 1200 GS Adventure and the K 1200 GT
the market launch is planned for the end of March 2006. the
The F 800 S and the R 1200 S will be available in the following months. The last to appear is the F 800 ST.
When is detailed technical information and, above all, prices to be expected??
In all probability, the price will be set before Christmas. Technical data are for the
K 1200 GT available around mid-February and for the F 800 S / ST at the end of March.