Accelerate with a simple trigger, in a natural gesture of closing the thumb on the palm

A breakthrough innovation that challenges the practice of motorcycling

Accelerating on a motorcycle is simple: you just have to turn the handle. A universal gesture (at least since 1909, date of its appearance on an innovative brand: Harley-Davidson), an instinctive rotation that you no longer think about when you ride. Turning the gas handle is an extension of his thought. And yet it’s not natural.

Frederic Vellutini thinks the opposite. A throttle grip is never more than a rotating tube covered with rubber and if, there, now, you try to grab a round object in your hand, you will see that this gesture is not natural. This is good … Now, close your fist: magic of the human body, you see, that is natural.

Engineer in electronic systems, Frederic Vellutini has a long career in motor racing: Formula 1, WRC, universes where it is good to know how to think differently to improve performance and efficiency. Frederic Vellutini rightly thinks that the world of motorcycles is very conservative. Good for him, he said ! 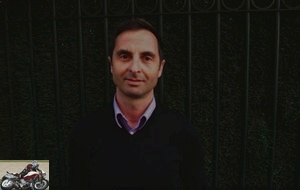 To think differently is to find an alternative to a commonly accepted gesture, but which does not correspond to an obvious reflex of the body and which has many side effects: thus, being hooked to the gas handle is to ensure that the right hand is at the same time in charge of the acceleration, the braking and the guiding of the motorcycle (while the left does not do much), with destabilizing effects (on the bumps), which affect the precision and that there is a mandatory reaction time to switch from one action to another, from acceleration to braking, for example. And who has not noticed, on the track, that it is a little more difficult to manage the gas net in tight right turns than in lefts, for example? ?

The solution proposed by Frederic Vellutini is called Inoveli FV01. Even if this handle is also intended for motorcycles, we tried it in town on a Honda PCX 125 scooter, with a second identical scooter but equipped with the traditional accelerator, for a direct comparison.. 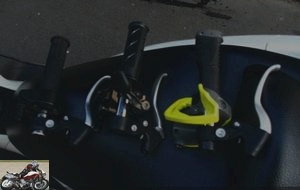 We can clearly see in the photo above: on the left, a traditional mechanism; in the center, a quad trigger; on the right, the Inoveli.

The Inoveli FV01 does not look like a traditional gas grip: wider at the end of the palm, so that the hand can comfortably lay flat, it is narrower on the inside and requires the thumb to push a trigger to accelerate. Like on a quad? Not at all: the quad requires pushing forward and it is very quickly uncomfortable. On the Inoveli FV01, you just have to wedge the palm of your hand and simply close your thumb. It doesn’t take any effort. The ergonomic advantages are obvious: 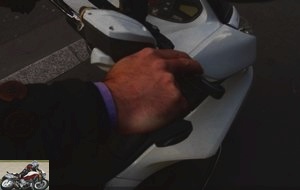 Once seated on the 125 PCX, the question is crucial: how to forget 30 years (damn, already …) of motorcycle automation? Well, in fact, it’s not complicated: on the advice of its inventor, I wedge the edge of the hand well inside, at the level of the proximal phalanx, between the thumb and the index finger. Then, I just have to put my thumb inwards: ready to dose the 11.3 horsepower of the small single-cylinder. Caution being mother of safety, I go there cautiously: it would not be a question of making a high side, either. Well, the good news is that the dosage is intuitive and that I was able to manage, in Boulogne-Billancourt (BoulBil for friends) frank acceleration at a red light, in compliance with the legislation in force, everything like evolutions in step between cars, not at all bothered by the 124 kilos of my noble frame and by soliciting the 11.5 Nm of torque with the flexibility and serenity of a gynecologist in full effort.

I also forced myself not to brake from the rear in order to see if the reaction time could be saved: answer, yes !

A top GP driver as a tester

The demonstration is quick and above all, obvious. The Inoveli FV01 handle is easy and intuitive to use and proves that this different way of thinking is relevant. In fact, we start to imagine other designs and it is for this purpose that Inoveli has raised funds, in order to move up a gear..

Why, indeed, not seek a partnership with manufacturers? "Because customers don’t ask for it," they reply. But innovations never come from customers. If Henry Ford had asked his customers what they wanted, he would not have built the Ford T, but would have done genetic research in order to produce horses that are stronger, faster, poo less and eat less. hay.

As a result, while the Inoveli handle has been tested in quad racing and road rallying, we can imagine it having a greater exposure. But who knows? Because Frederic Vellutini was contacted by a top GP driver who, moreover, declared himself satisfied. To be continued…

In the meantime, the Inoveli is available in priority for machines with 1 or 2 cylinders carburetors (there would be too much effort for the thumb to operate ramps with 3, 4 or 6 carburetors) and a version 2, suitable for ride-by-wire is ready to be soon compatible with all modern motorcycles.

Conclusion: the interest is real, but remains to be confirmed…

Thirty years of automation swept away in two rounds of city blocks! This is the strength of the Inoveli FV01 and I could very well have gone home with this white PCX and continued my life with it and no longer turning this damn handful of gas every day. ! 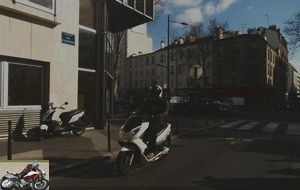 However, honesty means that this essay was too short. Admittedly, the thumb is sensitive, but the wrist is muscular: what about driving comfort on long journeys? What about precision on the track, riding a really powerful motorcycle? And besides, it may not be totally stupid, this handle: Keith Code, creator of the California Superbike School and author of a reference book whose reading is strongly recommended to you and whose title is called ironically A twist in the wrist ("a rotation of the wrist") explains quite rightly that to enter a turn, you need both a dynamic counter-steering stroke and then a good big trickle of gas to stabilize the bike. What the rotating gas handle lends itself admirably well. This is why we need to experience more things with this Inoveli FV01…

In short, if this test was both interesting and enlightening and demonstrated real approval and great potential, we will still wait for a longer test before declaring the Inoveli FV01 to be of public health. And besides, if Inoveli had been generalized earlier, the character of Ed the Handle, in the Joe Bar Team, would not have existed….