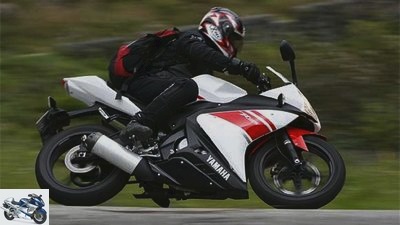 Naturally, it is rather the exception that a 125cc is part of the long-term test fleet. And if so, then only after a few discussions. If we really should, the machine outside is also popular?

And does she even get enough kilometers in a reasonable time? Quite different with Yamaha’s YZF-R 125. As soon as her name was mentioned in the editorial board, approval was rained. And yes, of course, 25,000 kilometers definitely have to be. She’ll be able to do that easily.
No question about it, little Ypse has the standing of a grown-up motorcycle not only on the street. In exactly the same way, she went to great lengths to live up to the advance praise. Fully accepted from the start, it was used not only for short-haul traffic, but also for longer tours, long journeys home and excursions. Even on the autumn trip (MOTORRAD 23/2008) with the high-horsepower long-term test fleet, she by no means played the brakes. Its comfortable suspension elements, the manoeuvrable chassis, the decent brakes and, last but not least, the powerful and lively single-cylinder engine bring you a lot of sympathy points. The logbook is bursting with satisfied entries. “So little performance, so much fun”, “seldom had such fun on the drive home” or “great chassis, actually only 5–8 hp are missing” are the comments.

The 125cc single built by the Yamaha subsidiary Minarelli is anything but weak on the chest. 5000 to 6000 revolutions are enough to be able to swim easily in city traffic. He goes about it at full throttle and turns easily to the red area, which corresponds to speedometer 120. With a slight slope and big ears, you can go far beyond that until the limiter comes into action at 135 km / h. On the other hand, the engine can be accelerated even at walking pace without undignified chopping and choking, which makes it easier to use, especially for beginners. Just like the gearbox, which still operates smoothly and precisely at half time, or the smooth-running clutch. In contrast, the stately seat height of 830 millimeters makes it anything but easy. For those who only reach the ground with tiptoe, Alpha-Technik (www.alphatechnik.de, phone 08036/300720) offers a lowering kit that brings the ground closer by 40 millimeters. However, at the price of reduced handiness and greatly reduced spring travel, which is quickly used up with every major bump, so that the rubber buffer on the shock absorber acts as an end stop. Which is not really comfortable and is therefore only recommended for those with short legs.

Over the first half of the test distance convinced “the squeaker”, as the YZF-R 125 is called affectionately. So far, it always started at the push of a button, there were no insubordinate vibrations, consumed a minimum of 2.3, a maximum of 3.8 liters per 100 kilometers, and was satisfied with an average of 2.8 liters of fuel. Clean. With the exception of a vibrated spark plug connector, it did not suffer from the slightest ailment at mileage 11672 and wound its kilometers almost faster than the long-term test KTM RC8. So far, the 125 had to go to the workshop twice for inspection. Whereby the 6000 maintenance was very moderate at 137 euros. The second had a much stronger impact. Not because of the fuel tank, which was replaced as part of a warranty recall. Shortly before the inspection date, the chain had made a cracking noise. Diagnosis: a broken chain link. The due replacement of the chain and sprockets, with a total of almost 150 euros, marks the largest item in the 12,000 inspection invoice of 478 euros alongside new brake pads.

So the YZF-R 125 has not really shown any real weak points so far. Only a few details were noticeable negatively in everyday life. Oil only had to be topped up once. It is annoying that the filler neck is extremely inconvenient and can hardly be reached without spilling even with a funnel. And the tank cap that is not fixed to the tank or the clear, but extremely sparsely equipped cockpit, which has to do without a coolant temperature display and timer, gives the otherwise beautifully made 125cc a Chinese touch that it doesn’t deserve. Apart from that, it was – also thanks to the very handy Pirellis even in wet conditions, which were changed at 13,700 km – of uncomplicated nature. The cool appearance can be enhanced with a filigree taillight holder from Alpha-Technik or – if the subtle bubbling that escapes the race-like styled exhaust is too good – with various accessory exhaust systems. Arrow and LeoVince offer ABE systems that do not offer more power, but a much more robust and mature sound. And save a lot of weight on top of that. The 125cc has been in service for twelve months. And even if the mechanical expressions of life of the mini-single have increased over the winter, the signs are good for a relaxed second part of the long-distance test. Because like on the first day, she starts up, runs without complaint, drinks little and hardly vibrates.