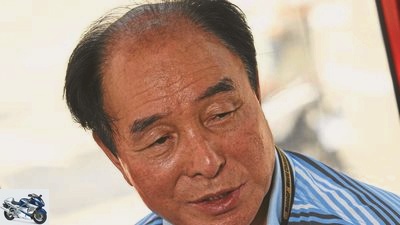 As a helmet manufacturer, HJC should be known to some motorcyclists by now. The fact that HJC is a company from South Korea and currently the largest helmet manufacturer in the world is probably not part of general knowledge. Time for a MOTORCYCLE talk with company founder Wan Kee Hong.

Mr. Wan Kee Hong, you have HJC Founded in 1971 – your company is quite young on the helmet manufacturer market. Just two examples: Your Italian competitor AGV has existed since 1947, Arai in Japan even since 1937. Back then, South Korea was not exactly known as the home of high-tech companies. But today HJC is the world’s largest helmet manufacturer, your products win comparison tests in MOTORRAD. How do you explain this technological upswing in your home country??

We have been in business for 43 years now and started much later than some of our competitors. We have invested a lot in manufacturing the high quality products that we have brought to market over the past few years. Of course, we couldn’t manufacture high-end products right from the start; we first had to gain enough experience with the technology. But now the fruits of these efforts are visible.

But does that not have to do with the mentality of your compatriots?

In general, Korea attaches great importance to the education of its children. The goal of all parents is to give their children the best possible education, so they put a lot of effort and a lot of money into it. There is also a very high work ethic in Korea. Korean workers spend a lot of time in their jobs, including Saturdays when work demands it. Unlike in many countries, vacation times are minimal. In addition, Korea does not have large natural resources and is therefore dependent on exports. In order to be successful, special knowledge is required, for example, for the construction of vehicles or electronic devices. Many Koreans are extremely innovative and skilled at making highly technical things. We’re also good at saving and reinvesting money. HJC continues to pour its profits into its state-of-the-art development center, new factories and machines. All Koreans do it that way, they invest in their future instead of spending the money they have earned.

The cheaper HJC models with a polycarbonate shell are made in factories in China and Vietnam, while the more expensive ones are produced in your home country in South Korea. Is there a reason for this division?

I believe that South Korea is more developed today than China and Vietnam. That is the reason. Some of our competitors only make high-end helmets, others only make inexpensive models. We have the advantage that we can produce high-priced helmets as well as entry-level helmets in different countries. Another reason why we are the world market leader in terms of quantities.

How long have you been supporting racing drivers in the MotoGP World Championship??

For more than ten years. It all started with Ben Spies in America when he was still a teenager – almost 20 years ago. We are active in the US Superbike Championship, in the Superbike World Championship, in Supercross, Freestyle, Enduro, everywhere. We want to participate in all areas for which we have a product on offer.

You support a lot of different drivers, for example the two-time MotoGP world champion Jorge Lorenzo, but also the young German driver Philipp Ottl. What kind of strategy is behind it?

The idea is that on the one hand we want to have the champion, but on the other hand we also want to promote the next generation. Like Philipp Ottl, for example, who will hopefully one day also reach Lorenzo’s level. The decision on the selection of drivers is an internal process in which we – also in close coordination with the branches in Europe and America – jointly assess the potential of young drivers and evaluate the performance of the already successful drivers. Of course, it’s also about assessing which driver could represent our brand well.

Some photos in HJC advertising brochures show Jorge Lorenzo sitting in the wind tunnel with one of your helmets. Was it just a promotional photo shoot, or did Lorenzo actually work with the HJC development engineers?

Jorge visited our factory, he tested in the wind tunnel and was there for many other technical things that we as a manufacturer do. We got very good feedback from him, especially in terms of aerodynamics. And we tried to take his advice into account when designing our helmets. But he’s not the only one we work with in this way. Ben Spies is another well-known pilot who did this. But there are still a number of lesser-known athletes who advise us, for example from the motocross and snowmobile sector. We have 50 designers and developers in-house who benefit from these people’s experience.

Jorge Lorenzo can certainly help develop a helmet for racing. But he only has it on for a maximum of 50 minutes at a time. Tour riders often wear their helmets for hours. Can the experience of Lorenzo help??

There is a team of 20 drivers in the factory, and when we develop new products, they try them out in hours of test drives.

Top drivers like Jorge Lorenzo should often have special requests. Things that require special developments but may never go into series production. Is that correct?

Jorge has to drive fast, this requires perfect aerodynamics. His second most important wish is to be able to see more. Because he often sits huddled on the motorcycle, his view from the helmet is different from that of a normal motorcyclist – he needs more viewing area in the upper area. It was also particularly important to him that no water could penetrate the helmet when it rains. We worked hard on that. In addition, the visor must never fog up in rain or cold, this had to be ruled out. He asked us to do these things.

Helmets like the one for Lorenzo will probably be continuously developed. How many times a year does he get a new helmet??

If he asks us to change, we will. This can happen two or three times a year.

Korean politeness prohibits criticism of an employer or supervisor. How do you cope when someone like Jorge Lorenzo has something wrong with your helmets?

This is not a malicious criticism, but a constructive one. It should make us better, so we always welcome it.

Thank you for talking to us, Mr. Wan Kee Hong.

Buy clothing from HJC at markt.motorradonline.de

The company HJC is a family company that was founded in 1971 by Wan Kee Hong, who currently runs it as chairman together with junior boss Shawn Hong. The now 73-year-old initially served in the Korean Air Force. When he went on to study engineering, he won several prizes and honors from private institutions and the Korean President. Wan Kee Hong lives in an apartment in Seoul, is married with three children and six grandchildren. The reserved patriarch likes to read and regularly goes on mountain hikes with his wife. 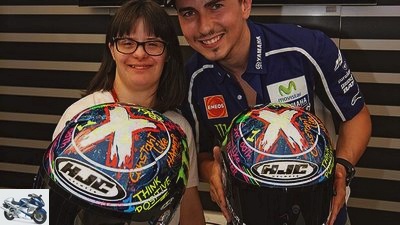 When Jorge Lorenzo, the Spanish MotoGP World Champion 2010 and 2012, celebrated his victory after the Catalunya Grand Prix last year, he had a guest of honor on the podium to celebrate the day. Because Lorenzo had won this success with a helmet in a very special design. The piece of jewelery was designed by Anna Vives, then 28 years old, a young Spaniard who suffers from Down’s syndrome. Jorge Lorenzo’s attention was drawn to Anna Vives through the Itinerarium Foundation, which aims to promote the skills of people with disabilities. With their support, Vives has designed its own computer font, which private individuals and non-profit organizations can download free of charge from their website www.annavives.com can be downloaded and used for your own projects. Lorenzo asked Vives if she would like to design his helmet for the Catalunya GP – said, done. Lorenzo was enthusiastic about the result: “Your work convincingly demonstrates what skills people can have despite a disability.”

Not only Lorenzo was more than impressed by the Vives design. Helmet manufacturer HJC launched a special edition of the RPHA10 Plus model. “In the Lorenzo Vives design, it is more expensive than the basic model,” says Peter Kaiser from HJC Germany, “but it has developed into our bestseller.” When Lorenzo auctioned his winning helmet at an online auction house for the benefit of the Itinerarium Foundation and for it HJC spontaneously decided to donate the same amount to the foundation again. The handover of the check by HJC founder Wan Kee Hong to Anna Vives took place at this year’s Catalunya GP, in which Lorenzo narrowly missed the podium in fourth despite the Anna Vives helmet.