Obviously, the KX450F no longer needs to be introduced. Across the Atlantic, in the USA, the machine won last year in both the Supercross and Motocross championships, winning both AMA championship titles..

Once again this year, the 2012 KX 450 F has demonstrated its superiority by securing a new AMA Supercross crown even before the end of the Championship! In the GPMX1 category, at mid-season, the KX 450 F is permanently among the candidates for the podiums, having notably signed a superb double in each of the two rounds during the Bulgarian GP in Sevlievo.

For 2013, the main improvements made to the KX 450 F concern the latest generation pneumatic front fork – a first on a production machine! -, the engine, even more efficient, and the revised overall ergonomics. Thanks to these modifications, the “taming” of the wild animal and the exploitation of its formidable potential are made easier for the pilot, thus able to sweep the competition, at any time and on all terrains..

High-tech suspension: Latest generation pneumatic type front fork (PSF).
– This very advanced system uses compressed air instead of springs.
Advantages of the PSF system:
– Better resistance to bottoming out and better track holding:
During the compression phase, the resistance offered by the compressed air is greater than that of the spring; in the expansion phase, the air presents less resistance than a spring.
– Extended setting range:
The adjustment range of the PSF type fork is significantly greater than that of a traditional spring fork.
– Ultra-precise tuning: pilots are not limited to just basic or optional spring system tuning.
– Easy to adjust with just an inflator and adapter.

The performance gain is clear at all speeds (in particular for the torque from very low to medium speeds) thanks in particular to a new shape of the piston crown and to the new mapping of the electronic box..

The system borrowed from the factory machines of the official AMA teams gives the pilots an appreciable advantage when the race starts are given in difficult conditions of adhesion..

The quick couplings of the injection system give easy access to the 3 engine maps: Standard / Easy conditions / Difficult conditions. Each of these engine maps can be modified using the KX FI calibration set.

Riders can ideally adjust their riding position thanks to the 4 adjustment positions of the handlebars and the 2 available for the footrests. In addition, the driver interface has been refined and designed for racing

The new discs are combined with a new master cylinder and new brake pads to provide stronger braking and better control.

With its redesigned front and rear mudguards, its decorations inspired by those of the factory machines, its alumite * rims and black fork guards, the blue alumite * treatment of the suspension settings and the blue finish that certain engine elements benefit from. , the KX450F displays a dynamic look that perfectly matches its high level of performance.

* Alumite : finishing treatment of aluminum by anodic oxidation to obtain a colored protective film resistant to scratches and corrosion. 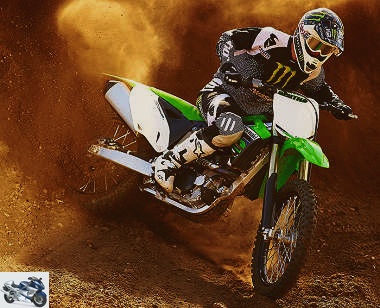 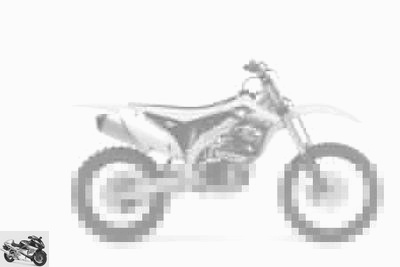 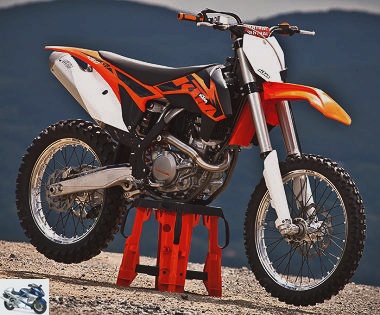 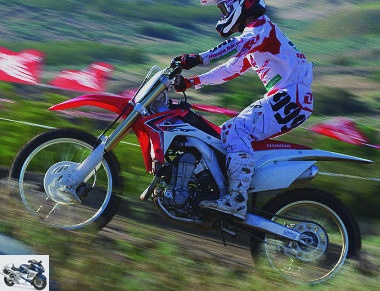 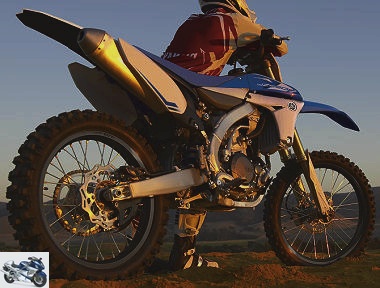