The long-awaited 125 Duke is finally on display. A project in progress since 2008, this new model represents a gateway for the youngest into the KTM universe. Indeed, the Mattighofen firm relies on the reality of the market (half of motorcycle sales in France are 125) and on the European evolution of the A1 license, which allows people over 16 years of age access to 125 from 2013… 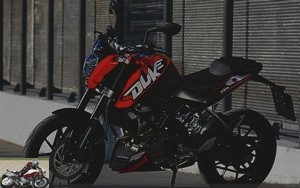 By introducing a strong aesthetic machine to this market, in line with the brand’s codes and its transgressive style, KTM wishes to appeal to young urban mobile people. As such, a vast personalization program makes it possible to follow the expectations of this target: to stand out and display the reference to a brand: global restyling stickers, accessories specific to the name of the brand (handles, discs, rim liner, etc. etc) and even LED ramps for tank…

In the same vein, dedicated clothing, with or without protection, completes this strategy. 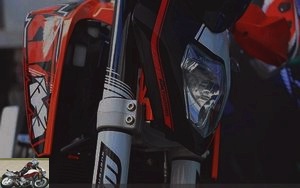 The youngest does not deny the aesthetic affiliation with her big sisters: thin, stripped, angular and … orange! The illusion works well because you’d swear you’re dealing with a larger engine. But it is above all its almost flawless finish that impresses, completing the mimicry with the tenors of the Austrian brand’s range.. 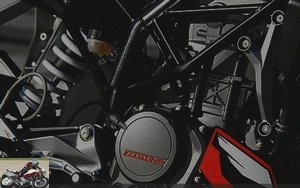 Because the new Duke adopts an all-new 124.7 cc, four-stroke single-cylinder engine block. The housings adopt the design of the LC4 engines, forcing the resemblance even further. The exhaust is placed under the engine and the gas plenum chamber in front of the shock absorber. According to the manufacturer, this engine cannot be optimized by tuning…
The manufacture of this 125 is provided by the Indian giant of the sector: Bajaj. The design remains of course Austrian.

The seat, with a height of 810 mm, allows as many people as possible to access the urban roadster-trail. Besides, the position is mixed. Footrests placed at the rear, body slightly tilted on a not so wide handlebars, narrow cockpit for tall riders. It smacks more of an attack between two fires than a door-to-door connection. 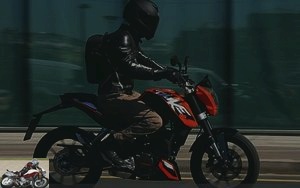 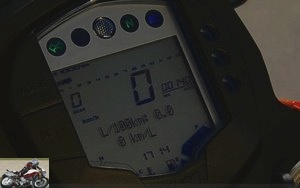 The commodos are standard but have the particularity of seeing their backlit icons … Unpublished. Easily adjustable, the mirrors unfortunately do not reflect a wide field of vision.

The illuminated orange meter initializes into a brush of liquid crystals. The single cylinder coughs and emits a muffled metallic noise. Appearances fall: it is indeed a 125…

Do not hesitate to accelerate frankly to obtain a dynamic displacement. We still regret a handful of gas with a fairly long draw which "breaks" the wrist.. 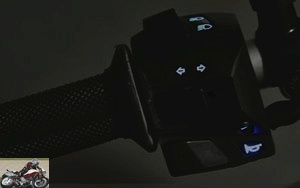 If the single cylinder is rather flexible, it is advisable to stay beyond 6,000 revolutions to obtain solid revivals on the third or fourth report. It is indeed these who will be most in demand in urban areas. However, you have to play the box regularly. This is unfortunately reluctant, imprecise and may require a slight break-in. As it is, it is sometimes painful to find a neutral point, or even complicated to come back to first after a stop in second. 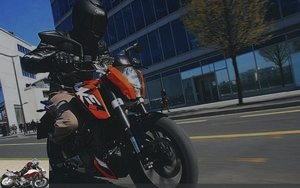 The 3rd rises very quickly to nearly 80 km / h, limited by the switch that turns on the shiftlight, to 10,500 revolutions / minute: more than enough on the boulevards. In doing so, we fully enter the fun space offered by the little Duke. Each traffic light is a start of the race, each interval between two tricolors an arsouille and the braking supported a call to the stunt: stopped, through…

Enduring, equipped with braided metal hoses, the radial caliper of the mini-KTM offers a substantial attack that will have to be managed on slippery roads. Equipped with an efficient fork, mass transfer is contained but the rear wheel is however quickly relieved.

The fitting of Reuz FC tires from Indian tire manufacturer MRF does not call so much praise. Their perfectible grip, coupled with the sometimes dirty or greasy pavements of the capital cities, encourages a certain restraint.

Another point is fatigue in the long run: despite the presence of a balance shaft, the vibrations appear from 3,000 rpm and constantly increase with the increase in engine speed. 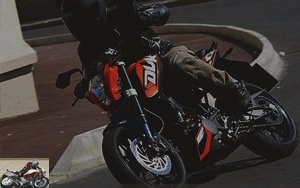 The front axle is very precise. Particularly manoeuvrable, both in maneuver and in dynamics, this pocket Katoche benefits from a contained weight: 130 kilos.

Highlight of the novelty, the powerful Brembo system will require a bit of anticipation from novices. 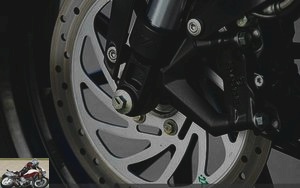 The passenger seat is firm and narrow. If the handles offer good support, the footrests are perched high. Urban journeys will satisfy this geometry. The peri-urban may be less pleasant. Just like the position of the pilot which, over the kilometers, proves to be tiring for the older ones. Sensation accentuated by a hard saddle with sharp edges. 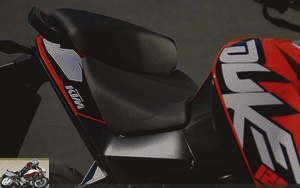 The 11-liter tank and an average consumption of 3 liters will allow a range of over 300 kilometers. The injection, set very lean, causes jerking when going around and when stopping can cause the engine to stall.

With no real competition in terms of image, performance, equipment and finishes, the 125 Duke is a phenomenon in a dynamic segment. Other than the duller Derbi DRD 125 and the breathtaking but less efficient MH 125 NK1, the new KTM won’t get much shade. The forecast of 1,000 copies sold (between May 2011 and the end of the year) will undoubtedly be achieved.

Displayed at the price of 3.890 €, the little orange "plague" will surely invade cities quickly.

It is also rumored that a 250 cm3 version would be more than sketched out … Enough to further boost the color of cities and make peripheral trips fun. To be continued… 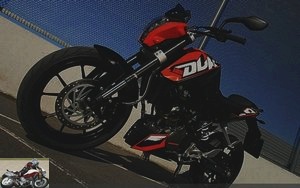