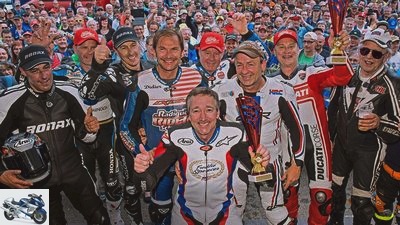 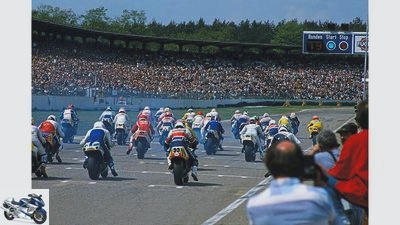 1/14
Start of the German Grand Prix in Hockenheim 1985 in front of full ranks. 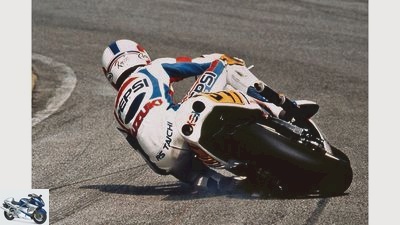 2/14
The most famous black line in the world: Kevin Schwantz in his world champion year 1993 with a lot of commitment. 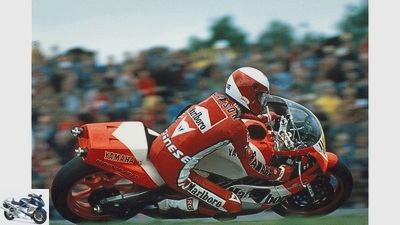 3/14
The best racing bike of the 80s: Eddie Lawson’s Yamaha YZR was hard to beat. 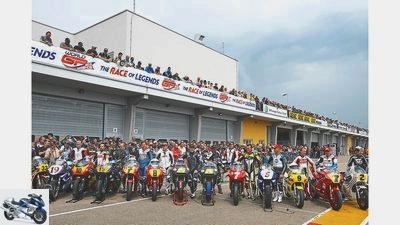 4/14
Young and old, fat and thin, with and without tire warmers: even if you try to make the whole thing look like a competition, with these gentlemen the focus was on having fun. 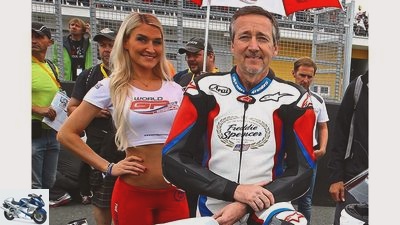 5/14
“On the Suzuki I missed the checkered flag”, Honda man Freddie Spencer after his first laps on a Suzuki. 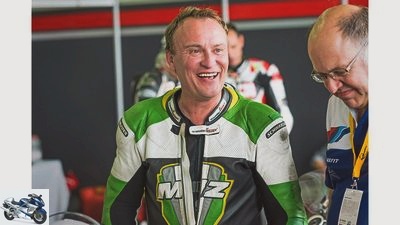 6/14
“I could have been faster, but nothing came from behind,” said Ralf Waldmann after his superior victory in the first run. 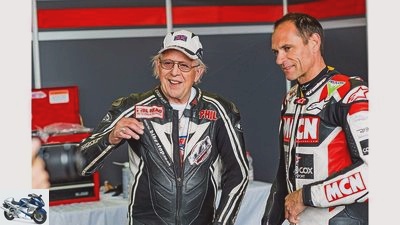 7/14
“The fans here are amazing. That was already 50 years ago, ”Phil Read remembers when he drove here on a purely road circuit. 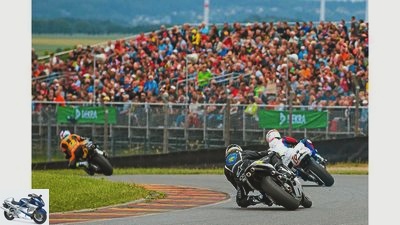 8/14
The audience celebrated their heroes from the past. 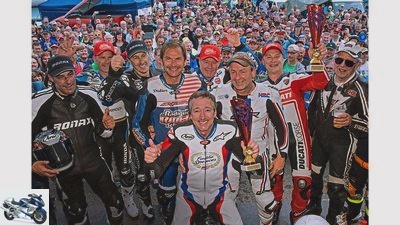 9/14
In the right place at the right time: the stars of yore at the awards ceremony. 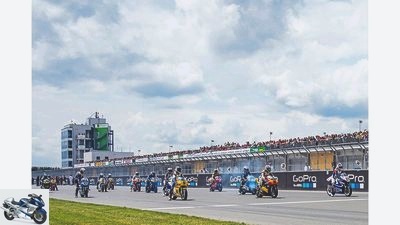 10/14
Resurrecting the heroes of our youth and the smoking GP bikes of our dreams can only be magical. 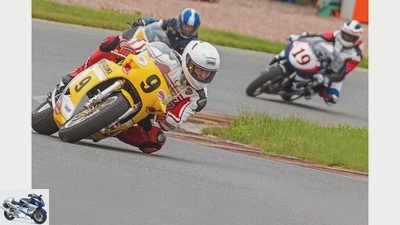 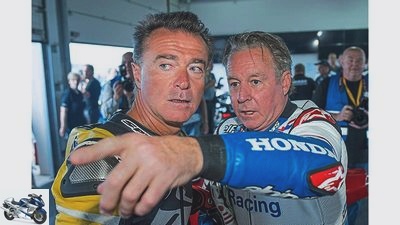 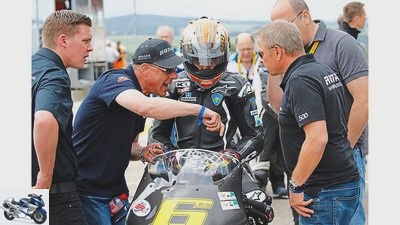 13/14
This is how we do it: The crew of the new Ronax is also looking for the right set-up. 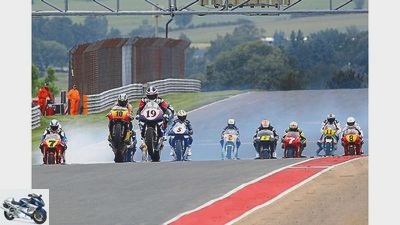 14/14
A little like in the past: the two-stroke pack on the home straight.

The idea is as simple as it is complicated: if you let the heroes of our youth and the smoking GP bikes of our dreams resurrect, it can only become magical. There remains one tiny problem: you almost have to be able to do magic.

Prize question: What sets Jim Redman apart from normal men his age? The answer: the woman at his side. She could easily be his granddaughter, because Jim Redman is now 84! And what do we learn from this? The attraction of the world champions of bygone days is unbroken even in old age. Also and especially with the female gender. With the best will in the world, that could not be overlooked at the appearance of the World GP Bike Legends at the Sachsenring Classic. Nevertheless, the vast majority of the assembled fan community was of course men.

And there were many men there! Even if the gender is not recorded when tickets were awarded by the organizing ADAC Sachsen, the majority of the official 30,400 visitors on the second weekend in June had unmistakably gray hair or a fairly wide parting. Lots of old men, but also lots of young ones. And the many, many in between. “Best Ager” if you will. Just like their heroes from back then.

Back then racers don’t grow on trees

Okay, Redman and the eternal Phil Read are not part of it now, and of course that shows a bit of the problem with the matter. One can probably assume that GP Legends promoter Wayne Gardner – himself 1987 world champion on a Honda NSR 500 – almost certainly didn’t have these two in mind when he started his concept in 2014. Rather, he had his arch-rivals Eddy Lawson, Kevin Schwantz and Mick Doohan in mind. Or the heroes who became world champions shortly before and shortly after him. Heroes like Kenny Roberts, for example. Or Wayne Rainey. The lion tamers of those days who put on a breathtaking highside-down show on their wild two-stroke rockets in front of hundreds of thousands of spectators.

The problem with the matter: the earlier warhorses are just as unavailable at all times as the motorcycles themselves. A works Honda NSR, a works Kawasaki KR 500, a works Suzuki RG 500 or a works Yamaha YZR 500 – these are growing as well today little on the trees as in their “active time”. Back then they were waiting in the boxes of the factory teams, today they are well protected in the factory museums in Japan. Or under scarves and in boxes of well-heeled collectors who want everything, but not one thing. Namely watching how the Gardners and Spencers of this world while trying to bring back the good old days, along with their treasures, dig into the gravel or into the tire wall.

I beg your pardon? Spencer on Suzuki?

Still, Gardner made it. Not with factory Hondas, but with Ronax 500 from Dresden. And not with Lawson and Schwantz, but with Read and Redman. And Max Neukirchner’s father Lothar, ex-GDR champion and short starter in the 500 World Championship on a Harris-Yamaha. And Manfred Fischer, who competed in the World Cup for a whole year in 1988. And Niggi Schmassmann, the Swiss, also active in the 500 World Championship on a Yamaha at the time. Or Jeremy McWilliams, whose star rose much later than that of Gardner and Co. or Didier de Radiguès and Pierfrancesco Chili, both not always very far ahead, but still there. Just as little as Jurgen van den Goorbergh or Ralf Waldmann, who rode Kenny Roberts’ 500cc after terrific 250cc times, which many have forgotten. However, he also followed a little. But one of the greats besides Gardner had come anyway. “Almost” Freddy Spencer was the star at the Sachsenring. And a terribly nice one on top of that.

“I had so much fun with the Suzuki that I missed the checkered flag,” smirked the 1985 double world champion at the well-attended press conference. I beg your pardon? Spencer on Suzuki? “For the first time in my life!” The eternal Honda man laughs, but for organizer Gardner the motorcycle problem is far more difficult to solve than the one with the riders. Spencer on Suzuki, Waldmann on Suzuki (at least in HB yellow, but in Ducati leather), Gardner on Cagiva (in Honda leather), van den Goorbergh on Suzuki, Neukirchner on Kawasaki KR 500 from 1981, Jim Redman on Suzuki RG 500 from 1980, but Jeremy McWilliams on a new Ronax 500, which Ronny Scheer and his troop in Dresden are currently putting together and which was probably superior to the rest of the field with 160 hp, 145 kilograms dry and modern Ohlins chassis technology.

The old Sachsenring had no gravel beds

And there’s something else that doesn’t make Gardner’s plans any easier. The two-stroke smash hit, which after a lot of persuasion he was able to get rid of from benevolent collectors, demanded special attention even in their factory racing life. Just the question of spraying – a science in itself that hardly anyone has mastered today. Add to that the exotic materials: How quickly such a mega-light magnesium case crumbles just when you touch it! Manfred Fischer’s Cagiva didn’t want to die in the second run, the English journalist Michael Neeves only got a few laps and Didier de Radriguès (also on Cagiva) didn’t even get off the grid. But, and that is the good side of the coin: the enthusiasm of the audience for this show did not diminish.

What the region comes into play with, its enthusiasm for racing and its affinity for motorcycles. Because if there is one place in the world where even today every toddler knows that Freddie Spencer drove a Honda, it is here. At a place that a Jim Redman remembers with pleasant goose bumps because he was driving here “as early as 1958, in front of 450,000 spectators. Back then, the top motto was ‘stay seated’, because the old Sachsenring as a street circuit had no gravel beds ”. And even today, among the thousands of drunk people on the Ankerberg, almost everyone knows his name. This is absolutely the right place to say “thank you” because this year is his last year on the racetrack. In view of this solidarity, the Saxons generously forgave him that Jim Redman pitted early in both races.

Audience celebrates heroes from yesteryear at the awards ceremony

The rest, however, let it fly properly when the material allowed. Ralf Waldmann was particularly motivated in the first run, who, contrary to all agreements, distanced the rest of the field and achieved an undisputed victory in front of his home crowd. In the second run, in which Waldi gave his RG 500 to Wayne Gardner, who had suffered from Cagiva, the “young wild ones” McCoy and McWilliams dueled for victory, closely followed by Spencer, Schmassmann and van den Goorbergh.

Of course, as always, the top secret lap times found their way to the public, and with a high 1.33 time they were not exactly on the level of snore cones. “They all waited for each other where nobody could see it exactly,” an insider knew. The audience didn’t care. They celebrated their heroes from before at the award ceremony in a very contemporary and up-to-date manner. MotoGP is in a few weeks. Then many of the audience will be here again – but never get that close to the current heroes.

Full ranks, full starting fields, full bunch: the 80s and early 90s were a good time for motorcycle racing. It was a dangerous one for the drivers, because never was the danger of highsiders higher than on these two-stroke rockets.

Quote: “Next year I’ll probably have to ride some four-stroke motorcycle in the American Superbike Championship!” This sentence comes from Mike Baldwin, 1986 alongside the great (Steady) Eddie Lawson Yamaha works rider in the 500cc World Championship after the race in Spa Francorchamps. This statement speaks of a contempt for four-stroke technology that is barely comprehensible today.

But in fact it was like this: racing motorcycles, and real racing motorcycles, were fired by two strokes – and no longer by any. The four-strokes in the US Superbike championships were too big, too heavy, too close to series production to be taken seriously (except in America). The really bad devices had 500 cubic centimeters, four cylinders – but only two cycles. At least in Europe, where – unlike today – the main focus of the World Cup. In light of this, it is all the more astonishing that American drivers of all people dominated this era. Or better: Actually, it is not surprising when you take into account the ruthless character of the 500s and the racing past of the US drivers. “In literally any situation, Eddie Lawson’s machine can be spun with the throttle grip. I drive like on soft soap. “

The great era of the 500 two-stroke engine

This original sound comes from Karl-Thomas “Ali” Grassel, the then three-time German runner-up who was allowed to drive Lawson’s YZR 500 for MOTORRAD in 1986 in Misano. And the by no means frightened racing driver Grassel also said: “I used to imagine a 500cc as a large version of my 250cc. Now I know: There is no comparison. ”What Grassel meant and what made the US boys so unassailable was the excessive power – at that time they assumed over 145 hp – in combination with the low weight and the state of the art of tire technology at the time. Less than 120 kilograms and a rear wheel that breaks out with almost every burst of gas – that was best done by those who were used to drifting from childhood. And that was the Americans with their dirt track.

And so it began, the great era of the 500cc two-stroke engines and their daring pilots. With Kenny Roberts, who hired Yamaha in 1978 to become world champion. Which he succeeded right away and then twice more in 1979 and 1980. It was followed by a short Italian episode (Marco Lucinelli, Franco Uncini) and a long list of American dominance – Freddie Spencer (2 x), Eddie Lawson (4 x), Wayne Rainey (3 x in a row), Kevin Schwantz (1 x ). The only one who managed to penetrate this phalanx was Wayne Gardner in 1987. In 1994 Mick Doohan took over for five long years before the history of the 500s titans slowly came to an end. Àlex Criville and Kenny Roberts Jr. were more of an embarrassment world champion before someone came along who still keeps the racing world in suspense today. Valentino Rossi won the last 500cc title before the four-stroke engine came. With twice the displacement, more power – but less spectacular. Or the memory transfigured something?