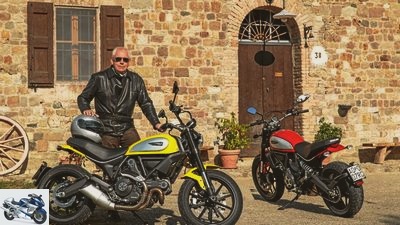 Dr. Ulrich Hackenberg is one of the top managers in the automotive scene in normal life. As Chief Development Officer of the Audi Group, he is now also responsible for Ducati. During a trip with the new Scrambler, he tells about his motorcycling life.

His life on two wheels began with his father’s NSU Quickly. With him the young Hackenberg made the area unsafe. It quickly became clear: the part is too quiet and too slow. As a first anticipation of the future career, the rubber intake manifold was turned forward, which at least made the scooter louder. Driving then became his passion. Logically, you studied automotive engineering at the TH Aachen, became a student assistant and even got the chance to do a doctorate. He was responsible for the field of driving dynamics, whereby his research group always focused on the interaction between people, vehicles and roads. His area had to take on an expert opinion. It was about the series of accidents of the Honda Goldwing with injuries and deaths.

Dr. Hackenberg got his driver’s license at the age of 27, bought a Goldwing, which was produced only ten serial numbers later than the one in the accident, and picked it up himself in Hamburg. His first big ride on a motorcycle – straight away with a 1000. It went slowly at first, but later it was faster around Aachen. Because he remains true to one motto to this day: He always sees himself as one of the test subjects. This is how he learned himself, and so he can test the learning experiences on himself. The bike was so far in order, unless you added certain parts to it and thus detuned the system. Handlebar fairing, suitcase, then it got critical.

Meanwhile, the wife is bravely going along

Hackenberg then built up a series of lectures on “Motorcycle Technology” at the TH Aachen with great success. When he went to Audi, he kept riding motorcycles. Especially since his wife is from India and you got an Enfield to move around there. The machine can now cover a good 30,000 kilometers. A lot of fun. Meanwhile, the wife bravely rides along, which was not easy because she ran an intensive care unit in a hospital. Now she is everywhere. He also likes to ride gravel roads in the USA or Africa.

He is delighted that he is now back on the motorcycle professionally. Even if for Ducati There is little time left in addition to his role as Head of Technology at the Audi Group, where Lamborghini and Italdesign also have to be looked after. At Ducati he acts as the godfather and looks at the very interesting technology. Want to find synergies, for example in engine control or lighting technology. He is also involved in the concepts as a whole. As with the scrambler or the machines that are in preparation. He gets on well with Claudio Domenicali, including when it comes to motorsport. Still, his job would be the car – 24 hours a day, most of his life. It captivates him emotionally. He has a high opinion of Ducati: very specialized, very sophisticated engine technology, high level of competence. Ducati is always a good address when it comes to high revs. Conversely, Ducati could benefit from Audi in terms of connectivity, materials technology and production technology. And there is still huge potential in sales. At the end of the conversation, he found the question about the first Desmo Audi quite interesting.