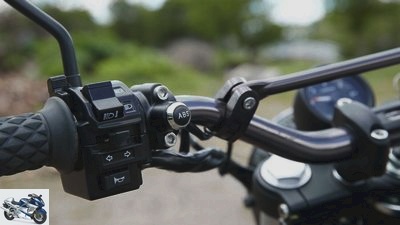 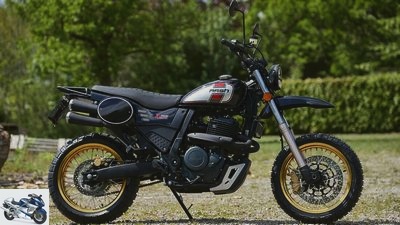 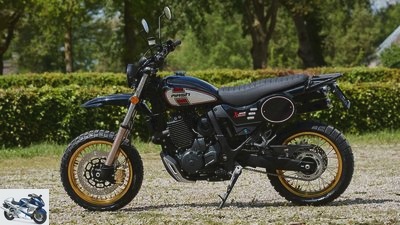 1/14
A black version has been added to the already known white X-Ride, which is also reminiscent of the XT 500 of bygone times.

2/14
The generous, active seating position invites you to sporty driving.

3/14
The engine likes to take things a little easier.

4/14
However, it is mainly the Kenda studded tires that limit the fun of steering.

6/14
The modernized engine comes with injection and has been adapted to the current emissions regulations.

7/14
The round headlight is equipped with modern LED lights.

8/14
As an option, the X-Ride can also be equipped with the coarser-looking flattrack headlights.

9/14
It couldn’t be easier. A small round clock with an easy to read tachometer, some warning lights and a small LCD display for speed, mileage and the like.

10/14
Brake: There is nothing wrong with the look – large 320 mm disc with radially mounted Hangte four-piston caliper.

11/14
During the ride with the fresh test bike, the brake required a lot of hand pressure, which could improve with a few more kilometers.

12/14
Clear switch unit on the handlebar.

13/14
All in all, this nostalgically styled mash is a 1970s experience in many ways, but wrapped in a new bike with a warranty and all.

14/14
A set of new tires is always recommended.

The Mash X-Ride 650 Classic meets the Euro 5 standard and is available in a stylish black version. And so it drives itself after the update.

the Mash X-Ride 650 Classic, along with the Dirt Track 650 and Six Hundred, is the largest model from the French brand, which began developing 125cc retro models in 2011. The X-Ride 650 was released in 2020 and has now been upgraded to Euro 5. A color variant has also been added to the white version: It is now also available in stylish black, clearly based on the legendary Yamaha XT 500.

The engine is also a classic because it is actually the engine of the 1988 Honda NX 650 Dominator, which in turn uses an enlarged version of the 1985 XR 600 engine. This air-cooled 644 cc single has a radial valve arrangement with the four valves arranged like flowers in a vase to create a beautiful hemispherical combustion chamber. A technical marvel at the time. But the Dominator wasn’t a powerhouse. Adapted to today’s strict emissions regulations, including with Delphi injection instead of the old 40 mm Keihin carburetor, the classic single develops 39 hp at 6,000 rpm (last year it was 40 hp, in 1988 originally 44 hp) and 45 Nm torque at 4,500 rpm (in 1988 it was 51 Nm at 5,000 rpm). That already gives a foretaste of the driving experience on the X-Ride: easy, low turning, in keeping with the retro character of the whole thing.

In keeping with the retro style, the minimalist dashboard shows itself: a small round clock with a simple but clear rev counter and a row of indicator lights in the upper half, with a small LC display underneath that shows the most important information such as speed, mileage and even has a gear indicator.

When driving, you experience a mix of two genres – the experience is reminiscent of classic off-road bikes such as the XT 500 on the one hand and modern supermoto on the other. In the saddle you feel more like on the latter: a spacious, active seat with wide handlebars and a high, hard bench. The view of the tank, the dashboard and the headlights, on the other hand, take the driver back to the late 1970s.

In practice, the single cylinder prefers the range between 3,000 and 5,000 rpm. Below that it starts to jerk and above that the engine feels like it is fighting, although its peak power is only available at 6,000 rpm. Nevertheless, it can be pulled quite easily up to the rev limiter at around 7,000 rpm, so that the rev range can be used on a tour. The Mash X-Ride 650 Classic generates dark, dull hammer blows; not violent, rather subdued.

Of course, the Mash X-Ride 650 Classic is not really fast – 39 hp and an unladen weight of 177 kg do not ensure breathtaking acceleration, but you can make good progress on winding back roads. The injection works well in the Euro5 trim, but is not completely smooth – however, the mash with the Euro 5 bikes is not alone and you get used to it to some extent. The switching processes are rather rough, but that also fits the whole thing.


Scrambler from Ducati, Fantic and Mash in the test

With the Dreckwuhler trio in the quarry

The Mash X-Ride 650 Classic is a retro bike for smaller, winding roads, but unfortunately the handling leaves something to be desired. This is mainly due to the fact that the X-Ride studded tires were mounted on their street-oriented 17-inchers. Looks good and is useful when you want to go off-road, but actually the X-Ride is a kind of supermoto and drives better with road tires. In addition, the studded tires look like Pirelli Scorpion Rally STRs, but are imitations of the Taiwanese brand Kenda. In terms of tires, the recommended very high pressure is also worth mentioning: 2.8 bar at the front and rear! During the demonstration in the Netherlands, the importer set this to just under 2 bar, which is more common for this type of motorcycle.

Be that as it may: The Mash X-Ride 650 Classic turns in rather slowly and then gives the feeling of going into the curve with not too much grip. It gets a little better when the tires are warm. You get used to it after a while, but the driving pleasure is increased enormously after a tire change to good road rubber. We know that from the comparison test with Ducati Scrambler Icon Dark and Fantic Caballero Scrambler 500. At that time, the X-Ride 650 was on Metzeler M7RR, which ensured very agile and manoeuvrable handling.

The impressive-looking front brake with a 320 mm disc and radially mounted four-piston brake caliper required a good deal of hand pressure during the ride with the fresh test bike, but that could improve with a few more kilometers. What will not improve so easily is the strong twisting of the fork during harder braking maneuvers – something we know from before. The suspension is well damped, but has a rather rough stop. For a brisk driving style, however, this is better than too slack suspension, especially since the damping is not adjustable.

The old-fashioned short maintenance interval of 3,000 kilometers is remarkable; this is partly caused by the expected usage behavior with relatively few long journeys. Even the valve clearance has to be checked every time (!) But luckily this is an easy task with this engine, thanks to the well-known Honda caps in the valve cover to reach the adjusting screws.

All in all, this nostalgically styled mash is a 1970s experience in many ways, but wrapped in a new bike with a warranty and all. A set of new tires is always recommended.