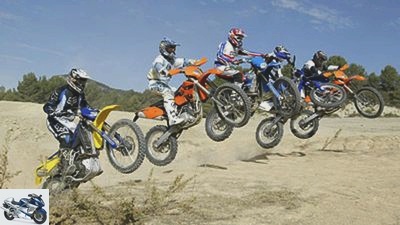 31 machines competed for the title of the best sport enduro of the year 2005. The electors: nine test drivers from the most important motorcycle magazines in the world.

A good rider wins with every motorcycle. A saying that is often quoted in the paddocks of the world. If it were that easy, we could stop testing completely. In practice, however, it looks different. Certainly, especially in off-road sports, the driver counts more than the motorcycle. But that doesn’t mean a top machine makes a looser a winner. On the other hand – everyone is aware of this – a victory without good equipment is an illusion. When fighting the clock, the motorcycle and its correct set-up are usually decisive for victory or defeat. And good machines also make the average driver faster.
Everyone needs, everyone wants the top motorcycle. But how can the wheat be separated from the chaff? Comparative tests are supposed to do that, but they are inevitably limited to a few machines. This is how the idea of ​​the Master Enduro was finally born, to which the entire motorcycle field is based, if possible. It is organized annually by the Spanish colleagues from Motociclismo, for the test of the 2005 vintage, professional test drivers from nine international magazines met in the off-road park in Igualada (information at www.parcmotor.com). 31 current enduro bikes were available, with all the major brands represented, after Husqvarna took part again for the first time in 2005. Husaberg has withdrawn from the event after the poor results of the past few years.
For MOTORRAD, regular tester Didi Lacher was at the start with the usual aplomb. Unfortunately, good Didi stopped laughing after he got stuck with the brake lever on a tree on a slimy steep descent, which resulted in a big somersault and a cracked rib. But what not a crosser
kills only makes him tougher. These and other imponderables cannot be ruled out. So the weather god always has a certain influence on the event, which extends over a week. All machines go in series-
condition at the start and have to pass an acceptance beforehand. There is no time to filter out an individual vote. Therefore, the participating manufacturers travel with experienced mechanics, sometimes even with their own test drivers, to attend a
to find the most universal basic vote possible. Which does not always succeed, as the TM test machines with partially unsuccessful fork settings were supposed to show.

The rules of the game

The fastest wins, sport can be that simple. However, in order to get a test result with the broadest possible basis, the international test team does not only rely on the one, all-important round. The nine test drivers individually completed a short, flat cross test and a 4.5 kilometer enduro test. In addition to the Bestmar-
of every motorcycle
the average times of all drivers are taken into account, another factor is the number of personal best times in each class. For example, if four riders set their best time in class on the same motorcycle, this can have a decisive influence on the result. Last but not least, the ratings of all test drivers also play a role. To do this, every pilot had to fill out an extensive test sheet for every motorcycle; a grade of one to ten could be given for each criterion. In order to ensure the same starting conditions, Bridgestone equipped the machines with type ED 663/668 tires, of which an entire semi-trailer was available. All machines also had to be put on the Dynojet test bench, this measurement played a role in the Be-
evaluation does not matter.

The small HM four-stroke is based on the
Crosser CRF 250 R, not on the Honda Enduro 250 X, and throws unmistakably loud from an only poorly damping exhaust.
The performance characteristics inevitably hardly differ from those of the Crosser in terms of performance
The CRE really plays power in its class
in front of the music. The engine turns very willingly and already pulls quite powerfully in the middle. Unfortunately, the e-starter, which is very practical in enduro use, is missing. The chassis is more about sportiness than comfort
designed, which is hardly surprising. The tight one
Suspension offers high reserves, balance
appears balanced.
Conclusion: pretty loud four-stroke for cross-
moderate tempo booming.

That the Yamaha lands clearly ahead, hardly a surprise to the connoisseur. Although it is completely unspectacular, it is so easy to control and so easy to drive that it collects five personal bests at the same time. The roaring HM four-stroke remains on her heels. The third place of the toxic TM two-stroke, which can prove its potential in the hands of professional crossers, is astonishing. The Italian four-stroke sister benefits from the improved performance of the current year. The KTMs, who are used to victory, are surprisingly at the bottom of the field this time. The Austrian two-stroke makes people sit up and take notice with three personal bests, but neither does the cross test nor the enduro test.

In the hotly contested class, with the exception of Sherco, all manufacturers start with at least two models KTM the customer even has to choose between four variants. The two HM-Hondas are certainly more of a disguised cross machine, but they obviously have the best prerequisites for chasing times among top drivers. The third place Gas gas proves that good times can also be achieved with a real Enduro. At the other end of the field are those
TM screwed up in the vote, the sensitive 200 KTM to be controlled and the too
softly tuned Sherco that has more potential. The 2-Trac-Yamaha can only show its advantages in extreme situations.

The previous series winner, the 525-KTM, had to be satisfied with bronze in 2005. Beat by the silver medalist Husky
TE 510, which benefits from the greatly improved engine tuning. The bottom line is clearly ahead: the gas-gas two-stroke with good times and six personal bests. It is noticeable in this class how close the best times are to each other. The 300cc KTM is far behind despite the good times, as only one rider was the fastest on this machine. That the nine drivers
In the two tests, only 17 instead of 18 times was achieved, by the way, because of his colleague Lacher, who had to give up after his crash in the enduro test.

Admittedly, the overall final with the three class winners has more of an academic character, as the machines usually only compete against each other in their classes. Nevertheless, there are comprehensive evaluations in all categories, both in the top and in popular sport, here and there even the classless society competes. Which machine is ahead of the game depends to a large extent on the route profile and can hardly be transferred to other slopes or conditions.
In this case, the candidates faced the three-way battle on the muddy one
Enduro exam. MOTORCYCLE was out-
sometimes not there anymore because Didi Lacher had to pass due to an injury. However, even without him they appeared in the final
absolute top pilots at the top international level. Vesa Kytonen, the ex-Enduro world champion, drove the powerful 450cc Honda around the course the fastest, Mattias Nilsson was there
the same machine only a touch slower, which ensured the overall victory of the HM-Honda CRE 450 F. Gabor Grillmayer felt
Most comfortable on the 300er Gas Gas, that helped her to come second. With the Yamaha WR 250 F, Mattias Nilsson proves that the
small machines are by no means without a chance. In the end, however, the little four-stroke had to be satisfied with the bronze medal.