The Sport Touring tire, successor to the Roadtec Z6 Interact

Testing of the brand new Metzeler tire in Sicily

Roissy Sunday morning, the heavy weather suddenly turns to storm causing disorder in the airport. My luggage left outside is now soaked. I, who came easily to Sicily for the test of the new Metzeler Sport Touring, I did not think that I was going to have to wring…. for two days ! 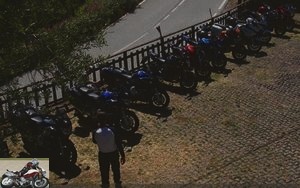 Sport Touring, here is a name which to my ears evokes heavy and comfortable motorcycles effective to travel far serenely, like BMW RT. Thinking to take it easy on the handlebars of these open spaceships, I stupidly left with a simple pair of jeans, boots and a leather jacket…. But I quickly forgot that in sport touring there is also sport. And if there is indeed a 1200 RT among the test bikes, there are also a few roadsters like FZ8, CB 1000 R, or Z 1000. 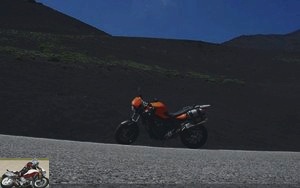 And then there are also the openers. You know these guys whose job it is to try out tires and who play at home since the Taormina road circuit we take starts 20 km from their test center in Giarre. We call them openers…. Because they open! Among them, Salvo Pennisi the boss of the testing department. The graying temple and the slightly bald head, he already has his 42 years of contribution to the pension fund as a professional pilot. The guy started young and above all he didn’t lose his grip. 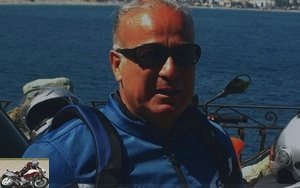 At least that’s what I see when I leave Taormina after only a few kilometers in pursuit of it, entering at 160 km / h a motorway tunnel as black as an oven. I did well to have a light breakfast this morning because digestion is going to be fast. After this appetizer, the group stretches out and I have the leisure to test the very relative stability of the FZ8 at 200 km / h on the multiple expansion joints of a not really straight bridge…. So is this sport touring in Italy? I’ve been told before that I was more Robert than Redford, but they are more sports than Touring! …. 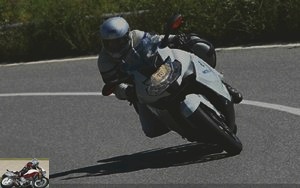 Just out of the motorway, we set off on the ascent of Etna through the small Sicilian county roads which are bumpy, greasy and not always very clean. "It sends big" anyway. On the occasion of a pose to exchange motorcycles, an opener confided to me: "here we drive slowly because the road is bad, but you’ll see further, it’s billiards, don’t worry, we’ll go faster . "I’m glad to hear it…. They are crazy those Romans ! 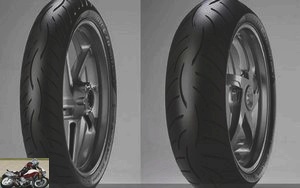 But obviously they are keen to show us the merits of their technological choices. To achieve this result, Metzeler engineers applied the same techniques as on the all-new Sportec M5, adapting them to the constraints of sport touring, (of which they have such a special vision). Replacing the Z6 Interact, the Z8 adopts Pi sculptures (Π) which give it a decidedly more modern look and closer to the M5. In fact, the main flaw of the Z6 interact was its design identical to the Z6 which appeared in 2003. A slightly “old-fashioned” casing which concealed a 100% new tire undoubtedly preventing it from making the place it deserved in its segment. . End of the story for the Z6 interact then, but not for the Z6 which extends its career in "second place" at lower prices. For its part, the new Z8 is priced at the same price as the late Z6 interact, claiming identical longevity, but increased performance.. 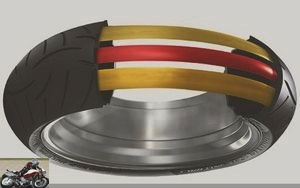 Leaving the dual compound technology to its cousin Pirelli, Metzeler prefers to play on the tension of the cables of the carcass to modify the behavior of the mixture and thus have harder or more adherent areas. The tighter central band limits deformation, which decreases the heating of the rubber and improves its resistance to wear. On the sides, however, the lower tension gives it more freedom…. which makes it easier to warm up and improves grip. A process called “Interact”, already seen on the M5 athlete, except that it is no longer 5 but only three zones that are present on the Z8. Indeed, here, there is no need to retension the "full angle" end very stressed on the M5 in track use. The Roadtec Z8 will never put the wheels there, it is not its vocation, even if our Sicilian friends have actively shown us that the grip offered is excellent.. 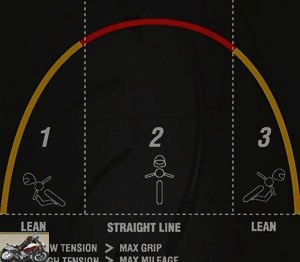 A carcass with variable flexibility

Composed of small cables assembled by three into strands themselves wound in groups of three in the opposite direction to the strands, the steel wires of the belt are likely to stretch slightly depending on whether the twists are more or less tight. They thus ensure a good level of comfort for the tire. However, beyond a certain limit, the assembly locks and it is no longer on the winding that we play but rather on the elasticity of the steel. In fact the deformations become much smaller, like a progressive rear suspension close to bottoming. Behavior that tries to reconcile comfort and course keeping as well as possible. The price for this comfort is that on machines equipped with "medium" suspensions (eg the FZ8), heading hold at high speed (200) becomes a little more blurred, because the tire "does the job". On more upscale motorcycles, we feel it less…. or not. Salvo Pennisi admits that manufacturers will unfortunately be increasingly confronted with this phenomenon insofar as the price war pushes manufacturers to cut corners on the quality of suspensions …. 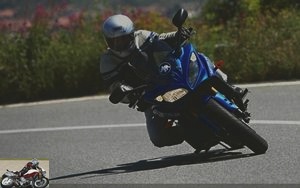 In the dry, as we have seen, there are no grip problems, even in fast use. The feeling of confidence is total. However, this is not a hypersport tire, the difference being in the liveliness of angle changes or heading hold at high speed, criteria to be put into perspective given the purpose of the tire. Here, pleasure and comfort take precedence over performance. We did not test the tire on wet ground (it was raining in Roissy, not in Taormina….), But despite a markedly lower notch rate compared to the Z6, the Z8 claims to behave improved underwater thanks to the better evacuation capacity of the “ft” designs.

Longevity side, no progress announced, but in this area the Z6 already had a very good reputation. Where Metzeler announces progress is in the stability of performance over time. 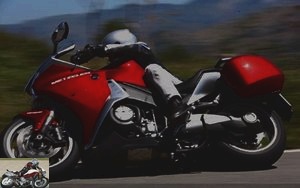 We were able to test a Bandit 1250 fitted with a worn rear tire, the treads on the central part being only 2mm deep (legal limit 1.6mm). This is an "artificial" aging, fairly flat, intended for manufacturer approval. Riding this machine we did not feel any particular apprehension. It seems that there was a slight difference when setting the angle at low speed, but it was not very sensitive and above all we tested it very little…. It appears that the shape and flexibility of the carcass help to eliminate this natural resistance to the angle of a flattened tire. Regarding the grip, I asked to continue our circuit on this machine. At the time of the exchange to take back the same bandit with new tires Salvo Pennisi comes to me and says: "So how do you find the worn tire? »I tell him that everything is fine, that I am confident, to which he replies:« yes it must be fine because I followed you for several kilometers and at one point I saw that the suitcases were touching the ground! …. "Is that possible? " If I swear to you ! »…. But he couldn’t show me the trail. It is probably wiser to trust your tires than your word …. 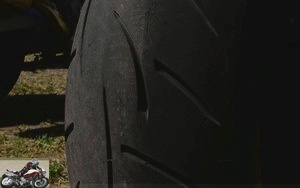 Longevity tests and biker opinions to come on the long-term tire test (initiated in 1999).