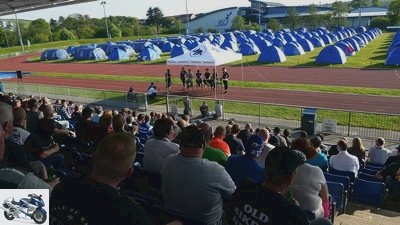 Metzeler Village for the Isle of Man TT 2018

Registration starts at Metzeler Village for the Isle of Man TT 2018
To the village squares, set, go!

The Metzeler Village will also open its doors for the 99th edition of the Isle of Man TT. The starting signal for registration has been given. Racing fans can book accommodation in October.

Metzeler is an integral part of the Isle of Man TT. Not only as a supplier and team partner, but also that Metzeler Village is on site for the sixth time in a row. Since October 9, 2017, fans have been able to book accommodation next to Quarterbridge Corner with direct access to the race track and the paddock.

The Tourist Trophy will take place from May 26th to June 8th 2018, dates can be booked between May 31st and June 9th. Prices start at £ 22 per person per night and vary depending on the accommodation chosen.

How was it actually for the MOTORRAD editors?

The village offers different tent categories for 1-3 people each. Sanitary facilities, paved motorcycle parking spaces, free Wi-Fi and much more are also offered. Breakfast is free for all those who travel on Metzeler tires. If you want to be right in the middle of the legendary spectacle, you should take a look at the homepage (www.metzelervillage.com) throw.