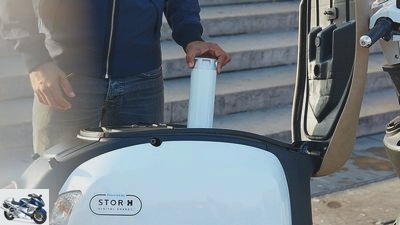 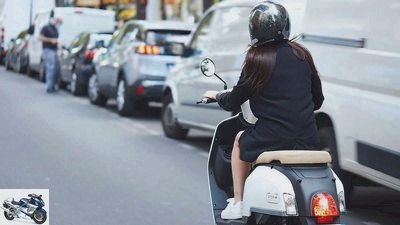 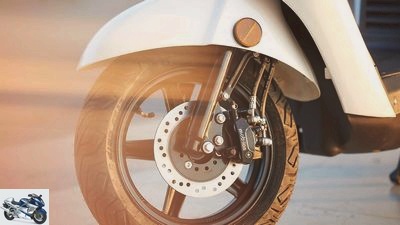 1/7
The French company Mobi-Ion has presented an electric scooter with fuel cell drive. 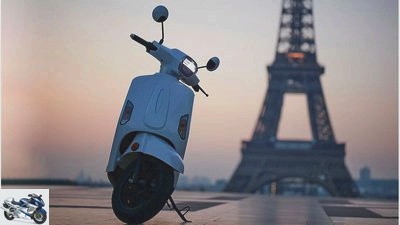 3/7
The prototype bunkers the hydrogen in cartridges under the bench.

4/7
These cartridges are simply exchanged for refueling.

6/7
A first drivable prototype is scheduled to go into testing at the end of 2021.

7/7
The developers are projecting a possible series maturity in 2023 at the earliest.

Mobi-Ion AM1 e-scooter with fuel cell

The French company Mobi-Ion has presented an electric scooter with fuel cell drive. The AM1 in this form is still a prototype, but could come onto the market from 2023.

Electrically powered scooters for city driving are no longer particularly noteworthy these days. But if they are powered by a fuel cell they enjoy a special status.

Battery electric e-scooter as the basis

The French Mobi-Ion group, which deals with energy solutions in a wide variety of areas, has developed a conventionally designed electric scooter with the AM1 in recent years. The Mobi-Ion AM1 competes in the 50s class and relies on a 3 kW electric motor that works as a hub motor in the rear wheel and allows a top speed of 45 km / h. With its two lithium-ion batteries under the seat, the 92 kilogram AM1 has a range of up to 140 kilometers before it has to be plugged in again for around 2.5 hours. From autumn 2021, the AM1 will be offered in France as part of a rental model.

A thermos full of hydrogen 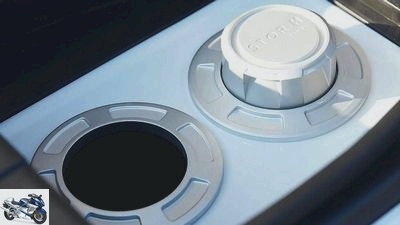 But Mobi-Ion goes one step further. A prototype now presented and developed together with the hydrogen specialists STOR-H replaces the battery pack with a fuel cell in combination with a small buffer battery. This new configuration aims to reduce the weight of the scooter and increase the range. In addition, the storage space under the bench increases. The fuel cell is fed from hydrogen tank modules that look like small thermos flasks and are stuck in tubes under the bench. The buffer battery is actually only required in the start-up phase, before the fuel cell then takes over the supply of energy to the engine.

Mobi-Ion relies on an exchange system for the hydrogen supply. Empty cartridges should be exchanged for full ones in stores. The refueling process itself is limited to removing and inserting new modules. Of course, there is no such infrastructure yet. Refilling the modules is also still completely unclear.

Nevertheless, the French want to send a ready-to-drive AM1 prototype with a fuel cell for testing by the end of 2021. The developers are projecting a possible series maturity in 2023 at the earliest.

More and more mobility projects are relying on hydrogen in the hope that at some point it will be available in sufficient quantities and at affordable prices. If the refueling process is as easy as it is designed here, then such a system definitely has a future.