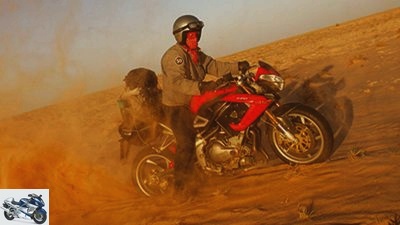 Driving a motorcycle from Morocco to Senegal is not unusual in principle. The fact that a completely inexperienced off-road pilot dares to ride a Benelli TnT is probably unique

First of all: these pictures are not a photo montage! That, dear Africa traveler – and hold on to your dented aluminum boxes – what is being piloted through the African sand by a guy in a bold Mad Max look is actually one Benelli TnT. An Italian brutal bike, designed for the boulevard, for courtship on mild summer nights, for the unrivaled sprint from traffic light to traffic light. That this bird of paradise cuts a much better figure in the sand than it does in front of the cafe – at least from the outside – who would have thought? But: Can something like that be? Such a thing is even allowed to be?

The English journalist Gary Inman never asked himself these questions: “For my first trip to Africa it had to be the motorcycle of my life!” The very hot Benelli on which he wants to drive from Morocco via Western Sahara and Mauritania to Senegal. Studded tires, luggage racks or an extra large fuel barrel? “Nothing there, if only because of the optics. And it doesn’t exist for a Benelli anyway. ”The Italian motorcycle manufacturer was inspired by Gary’s plan and provided the Englishman with a slightly modified TnT. Better cooling and tires suitable for touring – that had to be enough. Gary uses a couple of lashing straps to fix panniers, gas cans and luggage rolls on the tiny pillion passenger seat. Sits, wobbles and has air. From now on, the 33-year-old has only one destination: Dakar, the capital of Senegal and the annual final destination of the toughest rally in the world. He always wanted to go there. 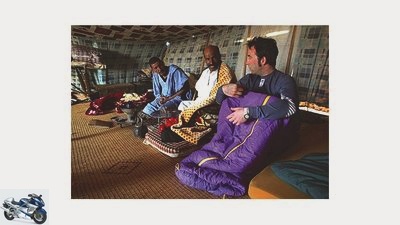 Overnight in a Mauritanian desert camp.

The fact that Moroccan roads sometimes have a decent asphalt surface is good for both man and machine. “The route from the Spanish enclave of Ceuta through the Atlas Mountains to Fes, Marrakech and Agadir was child’s play and, in principle, not much different from southern Europe.”

On this terrain, the Benelli is able to completely inspire the pilot. And not just him. Wherever the noble planer appears, people flock to marvel at this strange vehicle with the insect face, want to touch it, sit on it and at least once hear the brutal sound of the mighty three-cylinder engine. Milan fair or Moroccan bazaar – the scenes when you see a TnT are identical everywhere.

Occasionally, Gary meets other travelers. Mostly experienced desert freaks with appropriately equipped vehicles. Every time the same amazed looks when the unusual and apparently conceivably unsuitable load appears, every time the same question: “So to Senegal?” Gary, filled with an almost limitless self-confidence, nods determinedly, crosses the border to after a few days Western Sahara, rushes to Laayoune and finally to Dakhla. Mines to the right and left of the road, compulsory convoy, UN soldiers to protect against rebels: “I better kept such details from my wife,” the father of a little boy later admits. Good friends shook their heads anyway when they heard of his plan. Because Gary has hardly any travel experience, and certainly not any off-road experience. The only consolation for those who stayed at home: Africa connoisseurs consider the Atlantic route to be the “easiest” way to get into the desert, or Sahara light, so to speak.

The Benelli after the desert trip

Apart from Gary Inman, a person will probably never seriously think of one again Benelli TnT 1130 Traveling through Africa – that’s what clever designers have come up with enduro bikes. Nevertheless: The Italian luxury forge should be satisfied with how their 137 hp three-cylinder ultimately mastered this extremely strange trip. Only the two standard water coolers were exchanged ex works for two 20 percent larger units, an electrically operated fan was installed and touring tires (Dunlop D 220 ST) more suitable for long distances were fitted. The desert racer was ready – at least from a Benelli point of view. To the great surprise, the amount of damage was limited: a broken cooling fan, a burst shock absorber, loss of oil on both fork legs and a torn chain guide. 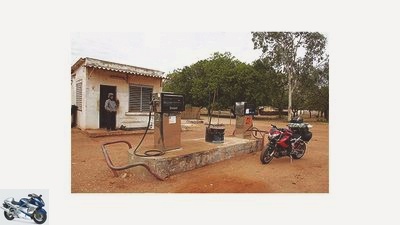 The next day there are another 130 kilometers of sand piste. The sufferings of yesterday are repeated. In the event of various falls, the cooler and the foot brake lever are damaged, but thank God they remain functional. Frustration spreads. “I had no more choice, I had to go through it now, whatever the cost.” Somehow, the driver and Benelli hold out until the evening. For a short time there is even a holiday mood: “The last desert camp was right on a beach on the Atlantic Ocean, for me the most beautiful place I have ever reached with a motorcycle!” Gary is satisfied with himself and the performance achieved. For a moment he even forgets how far the road is to Dakar.

The next two days promptly demand everything again. A violent thunderstorm turns large parts of the piste in the south of Mauritania first into a raging torrent, then into a single kilometer-wide mud bath. Dead cattle mark the roadside. Finally, the shock absorber says goodbye with a loud bang and loses all of its oil. Gary swings undamped as far as the border town of Rosso, where he falls into the hands of probably the most corrupt officials in all of Africa: “Bad luck when you roll along on such a conspicuous bike. Everyone thinks that there is really something to be gained from this. ”However, Gary has nothing and is allowed to happen at some point.

The driver and motorcycle cross the broad Senegal River on a small ferry. Final spurt. The last 200 kilometers are due. Finally asphalt again. The TnT swings bravely towards Dakar. Gary longs for a shower, a cold beer, and a bed. If possible, in exactly this order. On a mild summer evening, he finally rolls exhausted down the almost European-looking main streets of the Senegalese metropolis. For the first time since the start in Morocco, the battered Italian comes into her element for a brief moment: After 4172 mostly arduous kilometers, she is allowed to stroll down a boulevard again. 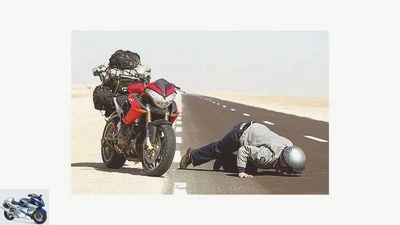 On the other hand, Gary learns that – as is so often the case in life – the point of view counts. Because of an easy route and “mainly asphalt”. Unfortunately, it just stops shortly before Mauritania. Enduro riders would now turn the whorl with delight, while Gary is promptly lying on his nose, and after a triumphant 2000 triumphant kilometers he has to work hard for every further one. And then there is this very bad-tempered border official who does not ask for the passport, but first for a “present”. This is the only way to keep the paperwork for entry within a manageable framework: “He sensed my inexperience and just let me fidget.” Gary waits for two hours in the dust in front of the doorless hut, falling victim to countless people being smuggled to help him along the winding paths offer their help in the jungle of bureaucracy. “Avez-vous un petit cadeau pour moi?” The constant inquiries about a present wear down the already battered nerves of the TnT pilot. Africa demands all the senses. The only reason that they finally come to an amicable agreement is that the official is an ardent admirer of English football and, in particular, of Manchester United. Connecting passions in the farthest corner of the earth.

Nouâdhibou, Mauritania: battered car bodies, carts knotted together from countless parts, rusty junk on wheels that somehow drags its way down the potholed streets of this city or – because the engine has long since blessed it – is pulled by mules or human hands. Gary feels motorized in the saddle of the aggressively styled bike: “If someone is looking for a vehicle fleet for an end-of-life film – they are guaranteed to find them in Nouâdhibou. Virtually every vehicle there somehow passes through as a streetfighter. “

The Englishman is aiming for the local campsite, a walled oasis of calm where numerous Africa drivers have gathered. Together with two similarly inexperienced Dutch people who are driving to Gambia in an old off-road vehicle, he is looking for a guide who will lead the small entourage safely through the desert to Nouakchott for the next three days. In the evening, the trio concludes a deal with Mr. Abba, a white-clad Bedouin, for 200 euros. They later find out from the boss of the campsite that this amount is completely overpriced. Does not matter. At a shabby gas pump, Gary fills the 16-liter tank and the 20-liter reserve canister to the brim again. Unleaded premium gasoline? Unfortunately not today. It is hard to believe that the TnT moves at all with the purchased broth. 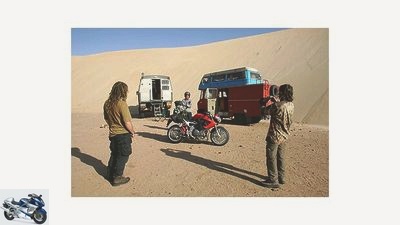 The group sets out early in the morning to cover as much distance as possible before the heat becomes utterly unbearable. “During the first 70 kilometers everything went well because I was able to follow the car to some extent on the relatively firm track.” Then the small convoy finally turns into the sand. Panic immediately spreads to the pilot, who is struggling to get ahead at all: “The wide slipper sanded the soft ground completely unsteadily, the texture of which changes every few meters.” Theoretically, Gary knows how to get on the terrain has to hold a motorcycle: stand on the footrests and hold the handlebars as relaxed as possible. The practice looks different. Bumps and elephant grass make the hard and tightly sprung Italian diva jump uncontrollably like a stubborn donkey.

Gary is happy to stay up at all. And it is important to grit your teeth, because the angular tank and the metal reserve canister leave painful marks: “Of course I could have put my luggage in one of the cars, but I wanted to remain as independent as possible.” The Englishman was hit several times from the saddle and the Benelli roughly on the flanks. The many scratches in the paint are now indifferent to him, the dents in the ego are far more troublesome. But he’s fighting!

A hidden Bedouin camp at the foot of a mountain marks the night’s camp. Mr. Abba’s relatives live there, and they immediately sacrifice a goat for the unexpected visit: in front of the horrified eyes of the guests, the wriggling animal’s head is cut off with a long, rusty knife. An hour later, Mr. Abba serves fried liver and camel milk. The latter from a “communal cup” in the size of a sink. At a late hour, the exhausted trio shares a narrow tent – with six other family members. The snoring of his hosts and the constant grunting of the camels drive Gary almost crazy. “I would also have liked to brush my teeth and wash the goat fat off my hands. Because of camp romance. I had imagined it differently. “ 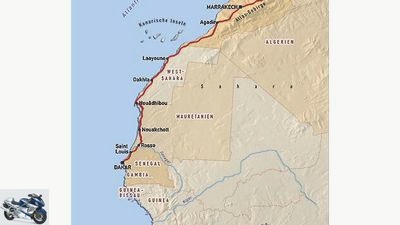 The described “Atlantic route” through the Western Sahara occupied by Morocco (now possible without military escort) and Mauritania to Senegal is currently considered relatively safe. In the foreseeable future, this route should even be paved throughout. The Foreign Office (www.auswaertiges-amt.de) (www.auswaertiges-amt.de) continues to advise travelers in Mauritania and the Western Sahara not to make trips into the interior of the country. For example, detailed country information, entry requirements and route tips can be found at www.sahara-info.ch