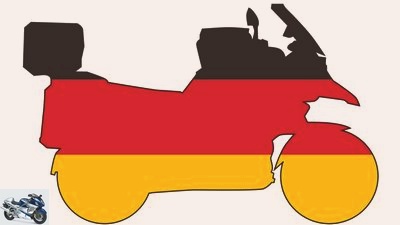 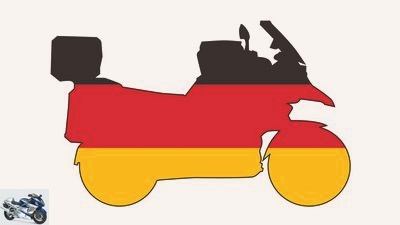 1/17
Motorcycle suppliers from Germany: Anyone looking for them should bring plenty of time with them. As opaque as its terms appear to be, the entire vehicle industry is nebulous: “Who supplies which parts to us? Oh, whether we can provide any information – that has to be decided by our European headquarters in Amsterdam, London or elsewhere… 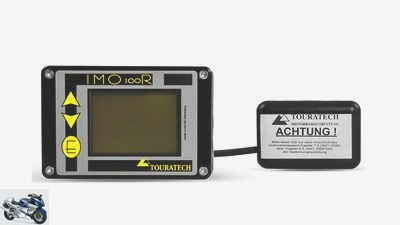 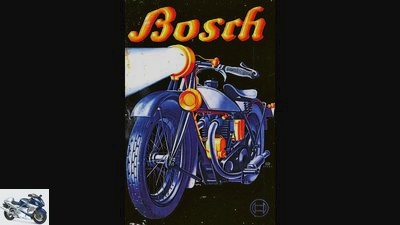 3/17
Bosch: No. 1 in terms of sales among automotive suppliers worldwide. Develops injections for small two-wheel engines in Asia and America. 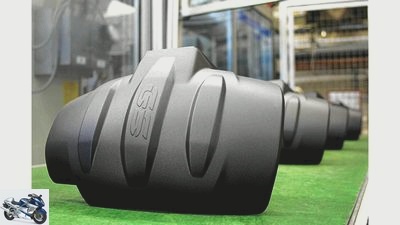 4/17
Coko-Werk: The “system supplier for technical plastic articles” produces cladding parts. Coko also manufactures in Poland and Turkey, but according to Coko all of the BMW parts come from Bad Salzuflen (North Rhine-Westphalia). 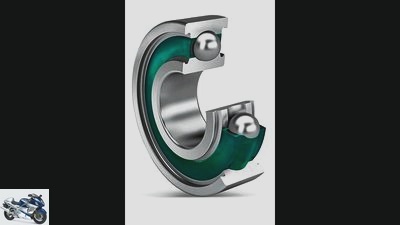 5/17
According to its own information, it supplies pretty much all major vehicle manufacturers worldwide. Belongs to the Schaeffler Group based in Herzogenaurach. Main competitor of SKF (Sweden). 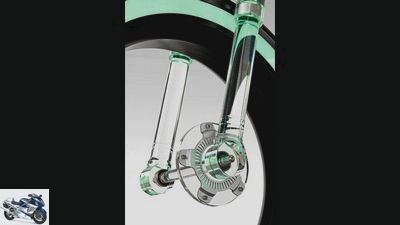 6/17
FAG: Schweinfurt-based manufacturer of bearings for all moving parts, whether in the engine, transmission or chassis. 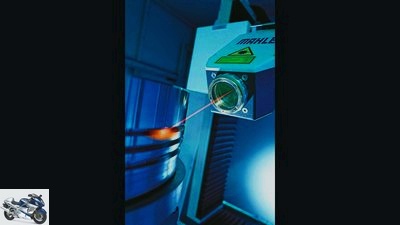 7/17
The quality check can be seen here. However, the Mahle-Behr Group also produces motor housings, complete motors as well as air filter housings and coolers. 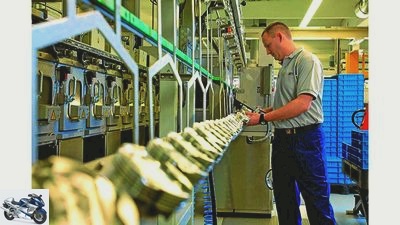 8/17
Mahle: The supplier from Stuttgart is primarily known as a manufacturer of pistons. You can see the piston washer. 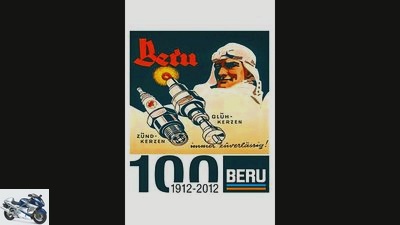 9/17
An old advertisement for the ignition system manufacturer Beru. 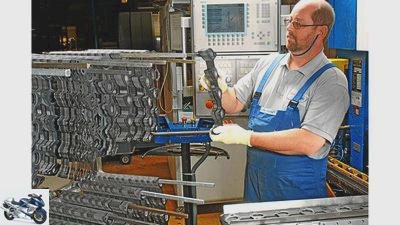 10/17
Elring-Klinger: Specialist from Dettingen (Ba-Wu) for manifold (shown on the photo) and cylinder head gaskets (e.g. for Harley and Ducati), but also for battery and fuel cell components, maintains locations worldwide. 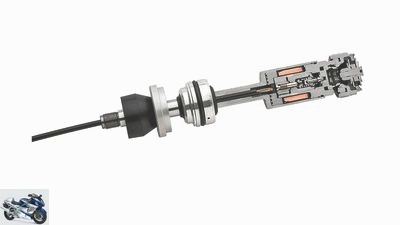 11/17
ZF Friedrichshafen: Whoever says Sachs today usually means ZF. At least when it comes to spring elements. Aprilia, MV, Ducati and Guzzi use them, but also Horex, BMW and Yamaha. ZF produces heated grips and switches for Harley. 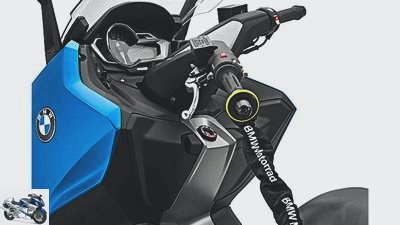 12/17
ABUS: The security locks from the NRW brand are more likely to be found in the aftermarket, but the handlebar lock chain is an optional initial equipment item on BMW scooters. 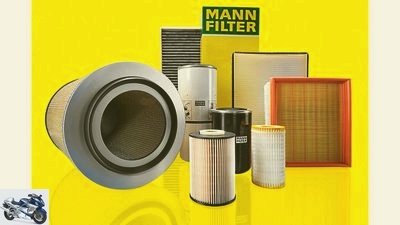 13/17
Mann + Hummel: manufactures air filters in India and on the Amazon, but also at home in Swabia. Millions of times in Asia and America 100 and 125 cubic bikes and scooters breathe through the filters of the German company. 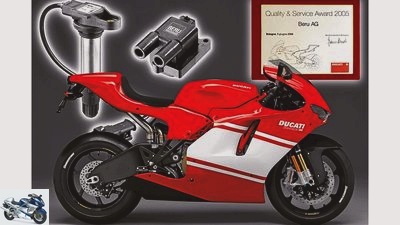 14/17
Beru: The Stuttgart-based company received the Supplier Award from Bologna in 2005 for their ignition coils in the Ducati Desmosedici. 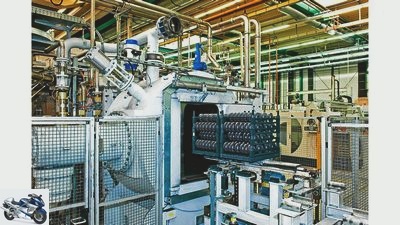 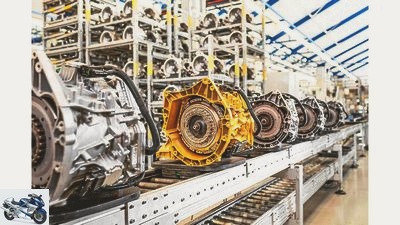 16/17
Getrag: The group in Untergruppenbach / Heilbronn was until recently an important supplier of transmissions for BMW Motorrad, but wants to withdraw from the two-wheeler business. You can see a millionth Getrag double clutch transmission. 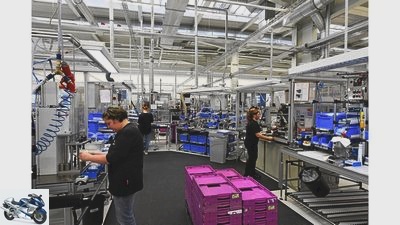 17/17
Magura: House and court supplier of levers and handles – among others. for BMW and KTM. Unlike most major suppliers, it has no relationships with the automotive industry, but supplies the bicycle industry worldwide.

Overview of motorcycle suppliers from Germany
Who produces what?

Tier1, Tier2, OEM – you only understand train station? The terms come from the vehicle manufacturing industry and refer to components or assemblies, their production stages and manufacturers. Whether at Yamaha, Harley-Davidson, Ducati or BMW. And German suppliers are getting involved almost everywhere.

Motorcycle suppliers from Germany: Anyone looking for them should bring plenty of time with them. As opaque as its terms seem (we will clarify the riddle Tier1, Tier2 and OEM below), the entire vehicle industry is as nebulous: “Who supplies which parts to us? Oh, whether we can provide information about it – that has to be decided by our European headquarters in Amsterdam, London or anywhere else… In any case, ABS mostly comes from Bosch for us, we can say that. ”So far the answers of the German press spokesman for the big ones international motorcycle brands. If they even gave an answer. Or if you didn’t answer like KTM, namely that you don’t want to give any other answer except: “Our home market Austria provides the most suppliers.” Aha.

Overview of motorcycle suppliers from Germany
Who produces what?

Of the 158 external GS parts manufacturers, well over half, namely 87, come from Germany or have their headquarters in Germany. In addition, BMW did not want to look deeper into the parts box.

So MOTORRAD started an arduous undertaking: rummaging around the well-known German manufacturers of supplier parts and being annoyed with the question of what they produce for which motorcycle manufacturers. And – if you can – please indicate in which models the parts are installed where. As expected, the result was mixed. Because some companies either completely refused to make a statement (windshield manufacturer MRA, for example, with reference to “sensitive data”) or sent narrow-lipped e-mails in response, for example the Continental group in Hanover (“… instrument clusters … and LED light control … “). Not a word about Conti’s “off-road ABS” (developed in Germany, manufactured in Shanghai, internal designation MK 100 MIB).

A number of well-known German manufacturers stated that they either currently or generally not act as original equipment manufacturers. The Saxon tire manufacturer Heidenau, for example, which is a specialist in scooter and enduro tires. Or the motor oil manufacturer Liqui Moly from Ulm. The Varta Batteries brand (belonging to the US company Johnson-Controls) is also not active in the motorcycle OEM business. Neither do the parts and accessories experts LSL (Krefeld) and Wunderlich (Sinzig-Ahrweiler). But where is the concentrated Tier1 and Tier2 competence from Germany? The answer: around 70 percent in Baden-Wurttemberg. 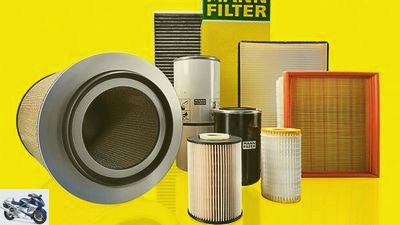 Mann + Hummel: manufactures air filters in India and on the Amazon, but also at home in Swabia. Millions of times in Asia and America 100 and 125 cubic bikes and scooters breathe through the filters of the German company.

Bosch, Beru, Mahle, Mann + Hummel, Magura, ZF Friedrichshafen – the German global players for engines, vehicle electronics and chassis components serve the international motorcycle industry from the state. Of course, this does not mean that all Bosch anti-lock braking systems, Mahle pistons or Mann + Hummel filters are also produced there. From the first Bosch motorcycle ABS in 1994 to the current 9M system, which is considered to be one of the most powerful, versatile and lightest in the world, Bosch develops and manufactures two-wheel anti-lock devices in Japan. In addition to the German ones, Mahle also has locations in 32 other countries around the world, and Mann + Hummel produces air filters in Manaus (Brazil), which are then delivered directly to the Honda plant there.

That spits out 1.7 million bikes a year with engines from 100 to 750 cubic meters, mainly for the Latin American market. The Mann + Hummel air filter plant in Tumkur in southern India, from where, for example, the production of Piaggio in Puna in western India or the Suzuki factory in Gurgaon in northern India are supplied, is likely to have hardly less sales. “Local to local” is the name of the concept that large companies use wherever possible. It says that the parts should be manufactured where they are installed. The Swabians still build the boxer airboxes for BMW in Berlin in a very down-to-earth manner in Ludwigsburg.

Suppliers in / from Germany 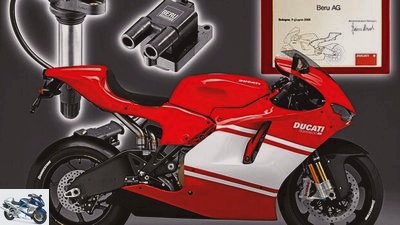 Beru: The Stuttgart-based company received the Supplier Award from Bologna in 2005 for their ignition coils in the Ducati Desmosedici.

Wegmann
With the Franken-Industrie brand, one of the leading manufacturers of balance weights, Zink-Gewichte supplies, among other things. for BMW (all models). WEGMANN automotive GmbH, 97209 Veitshochheim, Germany, www.franken-industrie.de

Kellermann
Is considered to be the inventor of the mini turn signal and is one of the market leaders in this segment. Not currently active as an original equipment manufacturer. However, it has been producing conversion kits for Kawasaki since 2004, which are available as original accessories from Kawasaki. KTM has a rear indicator set for the RC8 as an accessory. Kellermann GmbH, 52078 Aachen, www.kellermann-online.com

Osram
The company acts as a supplier of halogen lamps from the Herbrechtingen plant (near Ulm) for various headlight manufacturers, who then supply complete units to motorcycle manufacturers (e.g. Hella to Harley-Davidson). Osram GmbH, 89542 Herbrechtingen, www.osram.com

SW-Motech
As an original equipment supplier, the luggage system specialist produces aluminum cases for one of the equipment variants of the Crosstourer model offered by Honda only in Germany. The SW Motech cases for Honda Germany are considered a local-to-local part. SW-Motech, BAGS-CONNECTION GmbH & Co. KG, 35282 Rauschenberg, www.sw-motech.com

Touratech
The off-road and travel professional from the Black Forest produces pannier racks, cases, top cases, brackets for hand protectors, holders for windshields and underrun protection for the BMW R 1200 GS Adventure and F 800 GS Adventure, pillion armrests for the BMW K 1600 GTL Exclusive and cases for KTM 1190 Adventure R. KTM offers cases and pannier racks, various GPS holders, handlebar struts and a road book holder from Touratech as original accessories. Touratech also acts as an outfitter for
Special vehicles such as police motorcycles – z. B. with supports for the radio box, holders for additional batteries and fire extinguishers as well as a tubular bracket for the rotating beacon. TOURATECH AG, 78078 Niedereschach, www.touratech.com