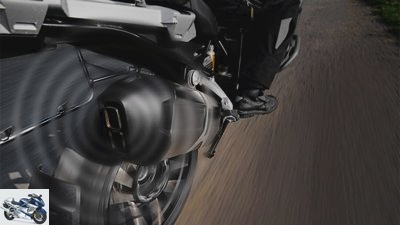 Motorcycles are perceived as louder than cars

Everything about motorcycle noise
Motorcycles are perceived louder than cars

Motorcycles are increasingly falling into disrepute as rioters, so more and more routes are being closed.

But are motorcycles really louder than cars or are they just perceived as louder? And what can we motorcyclists do about it??

Residents on popular motorcycle routes are increasingly feeling annoyed by noise, are joining forces to form citizens’ groups and are complaining to the authorities, the police and the media. MOTORRAD also received letters in which the writers demand not to publish a tour tip about their area, because already now because of the many motorcycles “Children no longer play outside and neighbors no longer talk” could. There is even a dedicated website on the subject: Unter www.motorradlaerm.de Initiatives and working groups have come together to take action against those motorcyclists who are driving with roaring loud and therefore illegal sounds.

Everything about motorcycle noise
Route closures and driving bans

The Federal Association of Motorcyclists BVDM counts around 50 full closures for motorcycles in Germany alone (2017), plus around 30 weekend driving bans – and the trend is rising. Just a few years ago, motorcyclists were courted guests in many areas. In the meantime, however, their presence is disturbing. But why do motorcycles come more and more into the barrage of criticism? Is it really true like the website “motorradlarm.de” asserts that the engine noise continues to increase?

Hardly, because the standards for noise emissions are becoming more and more stringent. Basically, motorcycles on the road are not louder than cars, but rather quieter, at least when it comes to levels. A study on the subject of motorcycle noise on behalf of the State Institute for the Environment, Measurements and Nature Conservation Baden-Wurttemberg came to the conclusion in 2010 that the emission level of motorcycles and cars is about the same at the same speed. The authors had evaluated the measurement data from around 17,000 pass-bys, including around 1,800 motorcycles. Many motorcycles were even significantly quieter than the cars. However, there were a few particularly noisy motorcycles and, according to the authors, they would probably be noticed more strongly by the local residents affected. 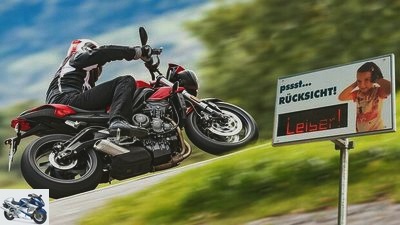 In some regions, noise displays are supposed to influence the driving behavior of bikers.

Because it is not the sound level itself that is disturbing, but the subjectively perceived loudness that can be determined in psychoacoustic measurements. According to the study cited, motorcycle noises are perceived as significantly louder and therefore more annoying than car noises – at 100 km / h even as twice as loud, although the noise level is the same. Musicologists at the University of Vienna came to a similar conclusion. A psychoacoustic study found that motorcycle noises are perceived as particularly annoying because they “a high loudness with a high energy content at two to four kilohertz, a tonal sharpness and pronounced roughness” exhibit. And: test subjects who had negative attitudes towards motorcycles reacted particularly sensitively to the sounds.

So it’s all about the frequency and timbre of the motorcycle sound. Motorcyclists cannot do anything about that, which is why one can now lament about it. Also about the fact that many people react more sensitively to noise than they did a few years ago, or that tourism authorities have discovered more promising target groups than motorcyclists and that annoyed residents perceive the engine noises as louder than they are because they have chosen motorcyclists as the enemy.

But lamenting cannot prevent locks. An effective way to counter this is to adapt your driving style. The participants in the Vienna study found the motorcycle noises particularly annoying only when the noise level rose very quickly, i.e. when the driver suddenly opened the gas. After all, we motorcyclists have that in our own hands. What is needed is a harmonious driving style without constant hard braking and full acceleration, especially in and around built-up areas. Does driving pleasure fall by the wayside? For free! It is better to drive with slightly braked foam than not at all. Another solution: Avoid popular motorcycle routes on weekends and public holidays. Go to the Bavarian instead of the Black Forest or go on a weekly tour with your buddies in the lonely Italian Apennines instead of the overcrowded Dolomites. Only if we become active ourselves could the noise about the noise become a little quieter.

The noise level of new motorcycles is increasingly perceived as a problem. MOTORRAD has found that the current Euro 4 standard is improving “didn’t bring much” Has. Political demands are now being made: “The EU should tighten the noise test for type approval of motorcycles and passenger cars”, said the President of the Federal Environment Agency, Maria Krautzberger, to the daily newspaper “taz”. Krautzberger continues: “We also need noise limits for speeds over 80 kilometers per hour and for all engine speeds.”

At the request of MOTORRAD, the Oldenburg EU parliamentarian Bernd Lange, himself a motorcycle fan, confirmed that it was “there are further legal developments in the EU” become. A dynamic and more realistic test procedure for noise measurement would also be desirable, said Lange. However, that will take time. The European politician sees the core of the noise problem in the fact that some retrofit silencers are too loud despite ECE approval and that this is not monitored.

There is no doubt that manipulated or emptied exhaust bags do not belong on the street. Anyone who has ever seen them in a narrow mountain valley knows how annoying a riot is – the roar can be heard for miles. But the sound of standard-compliant motorcycles is also annoying when they appear in large numbers. For example on the Wurgauer Berg in Franconian Switzerland, on Engter Berg near Osnabruck, on the L 755 between Langeland and Altenbeken near Paderborn, on the Hahntennjoch in Tyrol or on the Sellajoch in the Dolomites – examples of routes that involve closures. In the citizens’ groups and the local press, people quickly talk about reckless rascals or illegal motorcycle races – whether that’s true or not.


New noise regulation for motorcycles from 2016

Closures due to high numbers of accidents?

In March 2017, for example, Bavarian television broadcast a report on the noise pollution on the Wurgauer Berg in Franconian Switzerland and supported the report on the “Speeder” with pictures of a motorcyclist lurching up the street at a very leisurely pace. The route is now closed on weekends and public holidays – allegedly due to the high number of accidents. But this justification is likely to be a pretext. In a press release at the end of 2016, the local police were extremely satisfied with the sharp decline in motorcycle accidents. So the truth is, apparently, it’s about the noise. Like on Engter Berg north of Osnabruck, where accident figures were also used to justify a motorcycle ban in 2015. However, since the evidence for this was missing, the suspension was declared inadmissible by the Osnabruck Administrative Court.

At the Hahntennjoch and in the Lechtal in Tyrol, on the other hand, the local citizens’ groups say bluntly that they are not concerned with accidents, but with that “Noise terror” the motorcycles from which they want to protect local residents and tourists. Possible driving bans for the next season are being examined. There should also be more peace on the Sella Pass in the Dolomites. There, the full lockdown was directed against internal combustion engines in general every Wednesday in the summer of 2017. In all likelihood, the measure will be retained in 2018, possibly even extended to several days and / or other passports. The residents of the L 755 near Paderborn also wanted their peace and quiet: the seven-kilometer route should be closed to motorbikes for reasons of noise protection. Measurements on a sunny public holiday in June 2017, when many motorcyclists were out and about, however, showed a level that was far below the official noise protection guidelines. The Paderborn district then withdrew the order of the barrier.


Hahntennjoch – route closed due to noise?