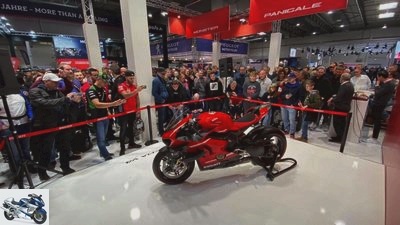 Motorcycles Dortmund 2020: That was the motorcycle fair in March

From March 5th to 8th, 2020 the motorcycle fair “Motorrader Dortmund” took place in Dortmund. 5 halls, over 400 exhibitors and around 70,000 visitors – a success despite Corona.

The largest European spring motorcycle fair traditionally takes place in Dortmund, also in March 2020. Due to the corona virus, although under difficult conditions – the fair was still a success. A total of 17 exhibitors had canceled their participation at the last minute due to the current infection warnings. After all, this made the aisles airier and the special shows took place between the manufacturers’ stands.

The new Zero SR / S electric motorcycle celebrated its European premiere at Motorrader Dortmund, the € 100,000 Ducati Superleggera V4 rolled out for its German premiere and at the BMW stand, interested parties romped about the new BMW R 18 with the 1.8 liter boxer engine. 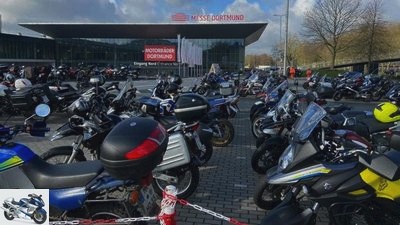 Numerous two-wheeler fans traveled on the road to the motorcycle fair in Dortmund and parked on site – as every year – free of charge on the exhibition grounds.

A total of around 70,000 two-wheeler fans came to the Dortmund exhibition center to start the new season. That is about 28 percent fewer visitors than in the previous year, which can be attributed to the current Corona warnings.

The Motor Presse Stuttgart unfortunately had to cancel its participation in the motorcycle fair in Dortmund. The management of the publishing house decided to forego the appearance of the editorial team in order to reduce the risk of infection. Next year Motorcycles Dortmund will take place from March 4th to 7th, 2021 – then hopefully without a wave of infections and again with MOTORRAD, all manufacturers and all interested two-wheel fans. We are looking forward to it!