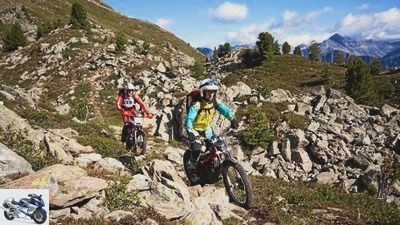 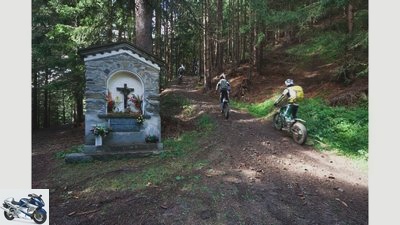 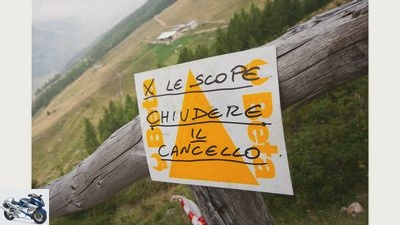 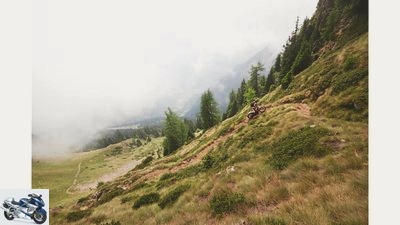 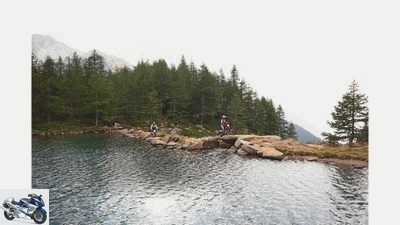 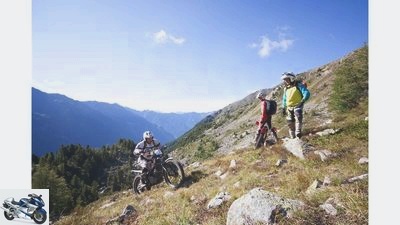 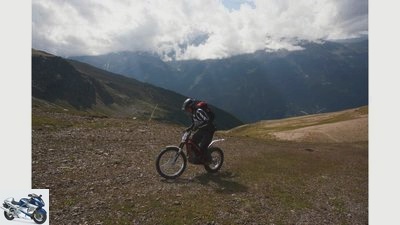 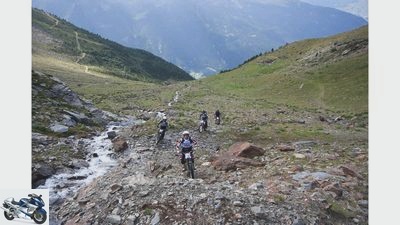 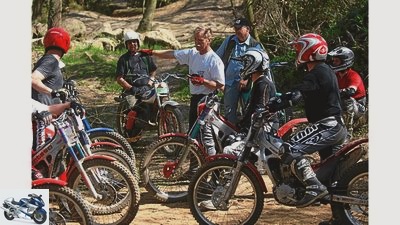 8/17
Perfect to try out: Trial courses including rental motorcycles. 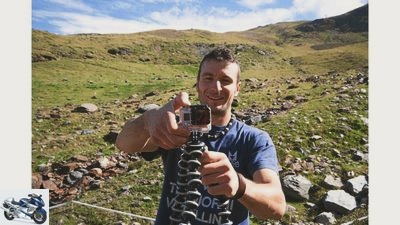 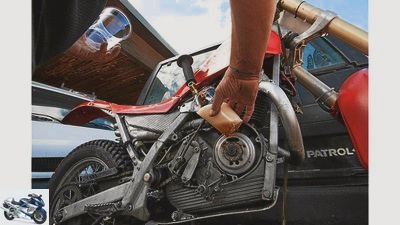 10/17
The eye drinks with or how to serve an after-work beer in proper style. 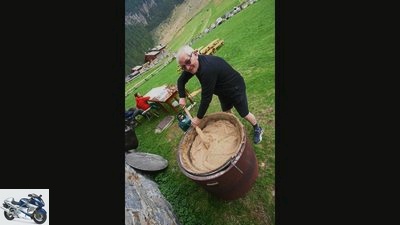 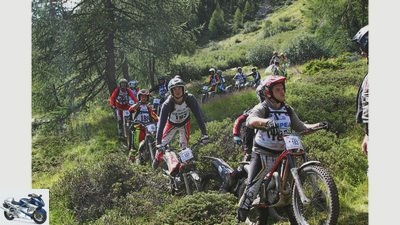 12/17
Traffic jam on the mountain: with 350 participants it can get tight at times. 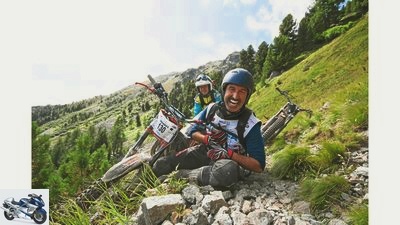 13/17
Take it easy: Straying from the right path can also be fun. 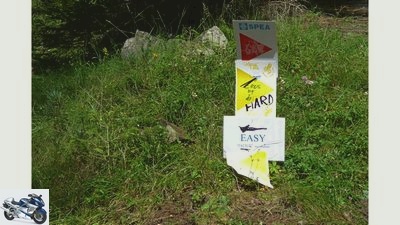 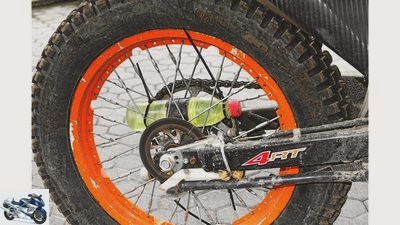 15/17
Reserve: There are many ways of increasing the tank capacity to just under three liters. 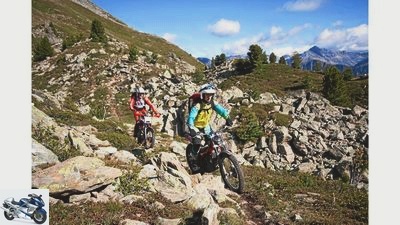 16/17
MOTORRAD editor Peter Mayer and MOTORRAD driver of the year Uli Kunzi experienced the exhilaration over the tree line. 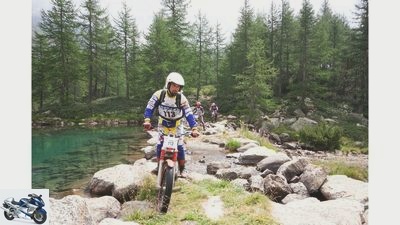 Do you want to scramble up motorized mule tracks on Mortirolo or Forcola? Completely legal? The Tre Giorni Valtellina mountain trial makes it possible. MOTORRAD editor Peter Mayer and MOTORRAD driver of the year Uli Kunzi experienced the exhilaration over the tree line.

The story would provide material for a film. Lino Della Rodolfa had done it. Trial professional, works driver, top positions on an international level. After his career, a big thank you to all companions: a hiking trip around his home town of Bormio that he organized. The motorized climbing tour among friends is rapidly gaining popularity. But while preparing for the sixth edition of Tre Giorni Valtellina, the three days of Valtellina, Lino collided with a car on his scooter in 2005. He dies at the scene of the accident. After the shock, the decision: Lino is dead, but the event should live.

His widow and son Gionata carry on the flame and develop the tunnel meeting at the foot of the Stilfser Joch into a cult event for off-road gourmets. For people who understand that only trial machines that crackle gently and have tires with buttery soft, weakly profiled tires leave the mule tracks intact. Out of respect. In front of the sensitive alpine nature – and because it is precisely these old transport routes that have been stepped onto the mountain slopes by mules (Italian: Mulo) that gave these mula trials their name. No ranking list, no stress, only those who want to start in the rated sections – this is the recipe for success of this popular event. Three days of pure enjoyment, that was also what Gionata had promised.

If it says “hard”, there is also hard inside

Uli and me too. A decade ago, Uli Kunzi won the “Motorcyclist of the Year” readers’ competition, which was advertised by MOTORRAD at the time. Even today, the engineer swings his Honda VFR 750 F over the country roads at the end of the day and has recently circled the terrain on the weekends with his Honda four-stroke trialer. And it was definitely this urge for higher things that made him follow that damned shield again. “Percorso hard”, difficult route. After two days he should have known. If it says “hard”, there is also hard inside. We have been screwing our way up this ridge at Passo Forcola for half an hour. What does screwing mean? Take courage, take a deep breath, carefully release the clutch – and off you go. Again and again lift the front wheel over the boulders, force the rear wheel onto the ground with your thighs. Right your elbow brushes against the grass, you hardly dare to look to the left. Because the left is actually down here on the precipitous steep slope.

Unless after the next bend. Then it is far down on the right. In between, turn every 20 meters, take courage again, find balance again, take a breather again – and always just look up. Because they are already there. Lots of Austrians, a few Swiss and Germans and even a few Italians. Only 30 percent of the 350 participants come from here. Strange but understandable. Anyone who can choose from four dozen mula trials on their doorstep each year is not afraid of missing out and goes to Rimini in August, not the Forcola.

Footrests and boot tips brush against the side walls

Even if everyone is in a good mood there. Like children in front of Santa Claus, the mostly well-known men stand up in a row, nodding friendly when Gionata’s friend Alessandro sticks a simple star on the lamp mask. This personal summit cross is awarded daily at the highest point of the round. Those who have collected all three stars after three days receive the symbolic accolade: a bottle of wine – but above all the respect of those who pinched and chose the “Percorso easy”. Actually childish. But at 2208 meters above sea level, we too quickly wipe a place for the sticker clean. Right next to star number one, which the ascent to the Mortirolo pass brought us the day before. Mille grazie, andiamo – thank you very much! And go on.

The path remains notched here on the plateau so that footrests and boot tips brush against the side walls. Again and again ingrown boulders block the way. Raising the front again, rescuing lunges. And stand, stand, stand. Because no one willingly settles in the ludicrously deep seat recesses of the trial bikes. The respect for Gionata and his men increases from meter to meter. For weeks the troop explored the paths for this event and obtained permission from the police, foresters and farmers. Because if you are caught there on a private motorcycle walk during the year, the green skirts will simply confiscate your saucer. However, Gionata’s uncle Silvano knows the security staff off-duty. Every lunchtime, the trained chef transforms a mountain hut into a slow food temple – as is also the case in slow trial sports. The wooden spoon virtuoso does not even take a tip. No, no, no, everything is included in the € 135 entry fee.


On the go: top alpine passes

The best alpine passes in Italy

The panorama anyway. The bare peaks, the small mountain lakes or, further down the valley, the lush green of the alpine pastures – it is often difficult to maintain composure. And the concentration. But that’s what you need for the descent into the Addatal. Dozens, yes felt hundreds of switchbacks it goes down. The 70 degree steering angle is only barely enough for the radius of the hairpin bends. Right, left, right – endless, rocky, super steep. Just don’t look down. Only the gas station brings us mentally back to civilization. A situation like the oil crisis. As far as the eye can see, trial machine is lined up after trial machine. But the queue is passed quickly. Sure, with a tank capacity of almost three liters. And nobody pushes ahead. The mood is completely relaxed and relaxed. Tricksters, dodgers and bullies have obviously not yet discovered this tour. And hopefully never will.

The way back to Bormio also shows why enduro bikes and scooters are strictly forbidden in mula trials. Even after hundreds of motorbikes, the sward looks fresh in many places. In contrast to the drivers. Cafes and bars along the route magnetically attract the tube knights.

Weak before the queen stage? Never!

Maybe that’s why the field cleared on the third day. The knees are weak, the biceps saggy. Also with us. Weak? Now, before the queen’s stage? Never! Again we screw ourselves up. Edges, rocks, roots again. Again pull on the handlebars and push the notches. And still stand, stand, stand.

And – of course – “Percorso hard”. We quickly left the tree line behind us. Open scree fields define the landscape. The engines, which are just 25 hp, desperately gasp for air and sometimes swallow more water than the drivers. Some Mula trial pilots have to refill at a mountain stream. We protect the material, cross the slopes up to Alessandro. Flatsch, the last star. At an altitude of 3011 meters. With the engine off and in absolute high spirits, we roll down to Bormio. Gionata’s search for missing people has long since begun every evening in the bars of Bormio instead of in crevices on the mountain. He’ll find us. 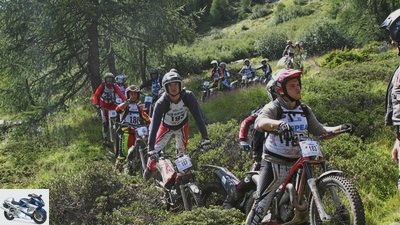 Traffic jam on the mountain: with 350 participants it can get tight at times.

Little off-road experience, no trial motorcycle, but you would like to experience a mula trial? With a little commitment, the dream can definitely come true.

Hand on heart: For those who are completely inexperienced in off-roading, the driving demands are too demanding even on the easy route variant of the Mula Trials. But those who have mastered the safe handling of an enduro off-road can think about participating.

Get a taste: Some specialized trial instructors offer the perfect platform for entering the world of motorized scrambling. Next to trail & Trial (www.trail-trial.de) especially enjoys the trial school (www.trialschule.de) an excellent reputation. Ideal: Both organizers offer courses with rental motorcycles that are distributed nationwide. Measured against the offer, the prices range from 225 to 270 euros per weekend (including rental bike) at a moderate level.

Buy trial machine: A brand new trial machine costs around 6,000 euros. To get started, a used one is by far sufficient for about half the amount. The running costs of a trimmer are negligible, and the loss of value is also manageable. In addition to the well-known sales portals (mobile.de etc.) the specialist magazine “Trialsport” (www.trialsport.de).