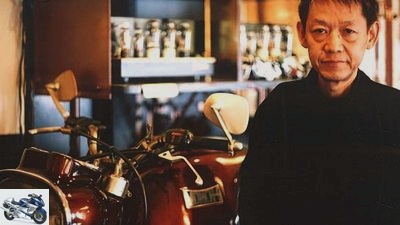 Munch cafe in Osaka
The milk does it

Mr. Tanaka is a satisfied, happy person. One who can be seen that too. He found happiness when he once brought milk to Osaka. Where one day he realized: Sure, milk does it, but a Munch does it much, much better.

That everything in the world is somehow related to everything, the flapping of a butterfly’s wings can trigger a hurricane, that is confirmed in the miraculous story of Mr. Tanaka. He earned his living as a milkman in Osaka back in the 1970s. As a result, milk will become scarcer and more expensive in this country this year.
Because the Japanese has grown a lot. Namely in length. Much more than the average Chinese, which the government of the People’s Republic does not like at all. You can still see potential for growth there. With milk. She did it with the Japanese. Because he ?? they are convinced of that in Beijing? In the middle of the last century I started to feed on milk and everything that can be made from it.
So Mr. Tanaka carried milk out to Osaka and his part in Japan’s new greatness. Which made him big himself. Not that he has gained in inches, but in yen. “The price for milk was very high back then,” says Mr. Tanaka, “and my income margin was around 40 percent.” The seventies were still good times for milkmen in Japan. Mr. Tanaka enjoyed a Harley-Davidson police machine, a BMW R 90 and a Ducati 750 SS. His motorcycles were like milk. It was usually imported at a high price.
Meanwhile, Japanese engineering with the Honda CB 750 or Kawasaki Z1 revolutionized the motorcycle world, Mr. Tanaka proved to be ugly resistant to such large-scale temptations. He confesses that he only tried his hand at one Gold Wing for a short time.
His friends say that Mr. Tanaka loves motorcycles. As can be seen from the fact that he wrote poems for his great love, even a whole cycle. It is not easy to translate the verses from Japanese into German, but be daring:

My treasure
My beautiful darling,
that fate left lonely,
we will always stay together.

The treasure is called mammoth, Munch Mammoth, and bears the mundane abbreviation 4 TTS-E 1200. In autumn 1974, in a motorcycle magazine, he met his Munch for the first time. He was impressed that his “beautiful treasure” was the most powerful street motorcycle, the first with 100 hp and fuel injection on top of that. But the inner values, which, as the vernacular know, should be important, are often viewed from the outside, especially in matters of love. And the Munch, especially in the form of a mere photo, offered Mr. Tanaka exclusively optical enjoyment.
He was blown away by this, he still raves today, brilliant mixture of elegance and brutality, force and sportiness, gentle curves and sweeping curves. It seemed to him like a machine that was alive, the Mammut von Munch, and one can only fall in love with such a machine.
Which Mr. Tanaka did faithfully. Day after day, night after night, he dreamed of the Munch. It was like a fairy tale. Like in Sleeping Beauty, where beauty is hidden in an enchanted castle. For Mr. Tanaka this castle was called Germany.

The Munch were made by hand in Hesse, only a few hundred in total. Mr. Tanaka had not learned foreign languages, and because he was also plagued by the fear of flying, a visit to the Munich motorcycle factory was a shame from the start. Means: If he can’t come to Munch, Munch has to come to him.
Going back to another motorcycle now seemed unimaginable to Mr. Tanaka. Why he dared the unimaginable: He took an interpreter, went to the next Grand Hotel, so that the linguist could connect with Altenstadt / Germany. The friendly man who took off from Munch, recalls Mr. Tanaka, was audibly confused: It should be a Munch 4 TTS-E, whether the interested party in Japan even knew how expensive this motorcycle was, 17,000 marks after all Transport properly to book and the Japanese state pack a hefty import tax on it. That is why no machine has yet been exported to Japan.
Mr Tanaka does not want to reveal how much he ultimately spent on Munch, leaving it with the indication that the money would have been enough for a home. But that wouldn’t have been enough for him. He describes the day when the big box from Germany arrived as the happiest of his life. He pried them open, prepared them and himself for the first ride, and, full of delight, wrote a wedding poem.
Wherever he stopped, wherever he appeared, he was the focus. Whereby, it would be more correct: his Munch and he. Mr. Tanaka did not exhaust the possibilities of the NSU engine and, unlike in the past, it did not drive as often or for as long. “Although it’s a gigantic feeling,” he enthuses, “to move this wonderful machine.” Sometimes the mere idea that you could, if you only wanted to, is satisfying, and Mr. Tanaka felt completely happy with his Munch, too Home. That’s probably why, say his friends, he built her own accommodation for her in 1981.
That this domicile eventually became a cafe was, of course, due to the milk. Or rather the ubiquity of the recently abundantly stocked supermarkets. Fewer and fewer Japanese are affording the luxury of having trained staff bring milk in bottles to their front door. At some point, Mr. Tanaka suspected, this profitable profession will come to a bad end; and the creepy fact that the noble drink was now even being offered for sale in cheap cardboard containers, definitely pointed to a rapid decline.
So Mr. Tanaka opened a coffee shop. And if you insist on milk with your coffee there, you are committing a faux pas that is just as bad as a guest in a star restaurant who demands ketchup or like a fool who fills up a Munch with diesel. The cheapest cup costs ten euros. But with Mr. Tanaka it is no problem at all to put several hundred euros for a pot of coffee on the table of the house. The finest beans, organically grown, picked by Aztec virgins from the noblest high altitudes under the full moon, slowly roasted, the aroma gentle, and brewed with Japanese mountain water? May be.
After all, the cafe has a noble name: Munch. He obliges, swears Mr Tanaka, and therefore it must only be the best of everything. “The porcelain comes from Meissen, because that’s where it is made most perfectly.” He has placed a few cups from the 18th century in a glass cabinet. He bought it for 50,000 euros when the Japanese importer went bankrupt. For his Munch, Mr. Tanaka does almost everything. Incidentally, it shows off in a place where, under Japanese law, it shouldn’t show off at all. Namely in the middle of a reasonably posh residential area.
Mr. Tanaka received an exemption for his catering trade. Because the Munch Cafe is actually not a trade at all, but a residence for his great love. If people come by every now and then to invest a lot of money in a serving of coffee, then that pleases him. Provided that they also appreciate the Munch. The 61-year-old recently wrote another poem, another pledge of loyalty to grow old with this machine.

When Honda rolled up the motorcycle market with the CB 750 and Kawasaki with the Z1, Friedel Munch remained calm. »The Japanese built large series and I made individual one-offs. So they didn’t irritate me any further. «Since the mid-1960s, the Hessian had been designing and manufacturing the world’s most powerful street motorcycles, powered by the engine of another character actor, the NSU TT. It brought 88 hp, but when the Z1 came with 82 hp, Munch stepped up in 1972 to extend its lead. With the latest technology, the first injection pump in motorcycle construction and, for the conditions at the time, a fantastic 100 hp. They made the 300 kilogram load at least 220 km / h (driving report in MOTORRAD CLASSIC 5/2006).
You couldn’t buy such a 4 TTS-E 1200 in the shop, you had to order it directly from the factory, like Mr. Tanaka, and pay for it immediately, depending on special requests that was up to 20,000 marks. The machine could then be picked up after four to six weeks. A total of around 130 injection models were built.