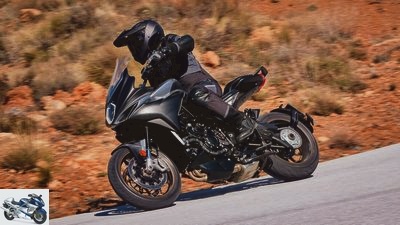 MV Agusta builds in Asia: But not with Loncin

MV Agusta doesn’t build with Loncin after all
Loncin out, QJ in?

The traditional Italian motorcycle manufacturer has dissolved a partnership with the Chinese Loncin Group for the construction of small MV models from 2019 in the wake of the pandemic.

Nevertheless, it is planned to build in Asia. With Benelli mother QJ in China or Bajaj in India?

The long-term partnership between MV Agusta and Loncin Motor envisaged the development and construction of a new model family, which is located in the displacement range from 350 to 500 cm³. A total of four models are planned, which should roll out to dealers by the end of 2021. Everything in the past. In an interview in the MOTORCYCLE 09/2021 CEO Timur Sardarov has declared the end of Loncin: “We don’t do that anymore. Due to the pandemic, it became too difficult for us to communicate correctly with Loncin and to send people there to build the project in a controlled manner. China was in lockdown for practically a year. That’s why we terminated the contract.”

On request, Sardarov added that MV Agusta is still planning to have the planned entry-level models with small two- and three-cylinders produced in Asia. If the signs of the Asia plans otherwise remain the same, the new models will be designed at MV Agusta and the machines will be manufactured by the new partner. With the new motorcycles, MV Agusta is targeting the premium segment of small-volume models in Asia. The small MVs should also come to Europe. Now that Loncin is out, the recently appointed one could Sales partner QJ Motor – as the mother of Benelli – and leadership of Geely boss Li Shufu step into the breach. The Covid hurdles there would also be as high as with Loncin. An alternative in Asia could be Bajaj in India, where the small KTMs are already being built and a cooperation with Triumph is ongoing.

950 adventure model as an elephant

The current model portfolio from MV Agusta covers sports tourers, naked bikes and super sports bikes with three- and four-cylinder engines from 675 to 1,000 cm³. However, Sardarov confirmed the development of a new 950 engine in order to be able to diversify the range further. The new engine will initially come in a crossover model and also as a three-cylinder. That could possibly be under the name “elephant” compete. At least the Italians had this name protected in early 2020. Originally ran under the name “elephant” Large enduro bikes from the Cagiva brand, which is also part of the MV Agusta Group.

In the same conversation, Sardarov also confirmed the development of a small adventure model with 550 cubic meters from and for Asia. It is unclear whether the three-cylinder or a slim, inexpensive twin will also be used here. Tendency: smaller twin.

Contract with Loncin: dissolved. Asia strategy: remains. With a new partner in Asia, MV Agusta wants to build small and medium-sized motorcycles. It is unclear whether they will come to Europe or who the partner is. QJ as a current sales partner with its immense capacities in production is possible. Bajaj in India too. And with KTM and Triumph, they already have European premium claims on the belts.