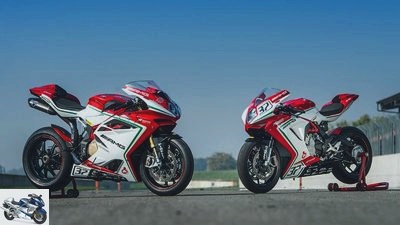 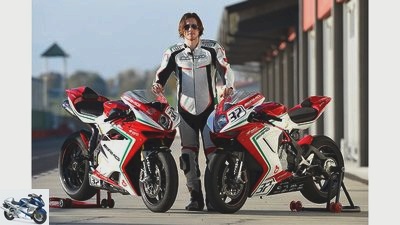 1/25
With the limited models F3 RC and F4 RC, MV Agusta offers the WM basic models for sale. But looking good is not enough, ladies (and Tobi). So off to the slopes and show what’s possible. 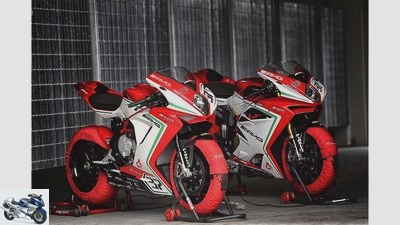 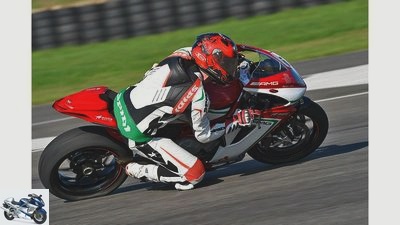 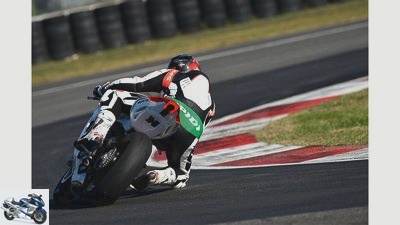 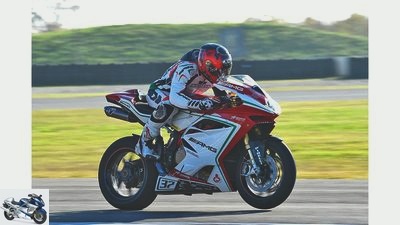 5/25
The MV Agusta F4 RC, on the other hand, shows what it has and carries its rear silencer directly under the rear. 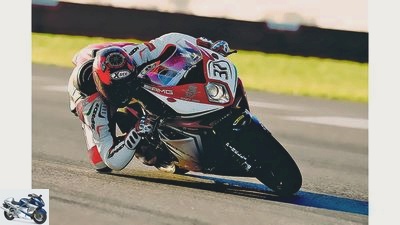 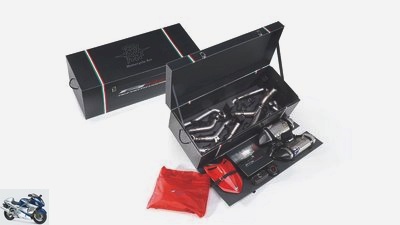 7/25
Treasure chest for F4 RC buyers: In addition to the Termignoni system and other accessories, it contains that of company boss Giovanni Castiglioni
signed certificate of authenticity. 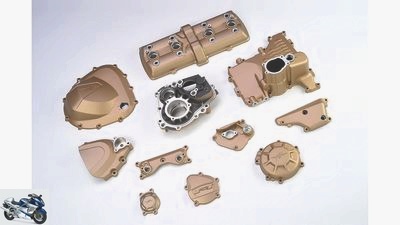 8/25
To save weight, all motor housing parts are made of a magnesium alloy. 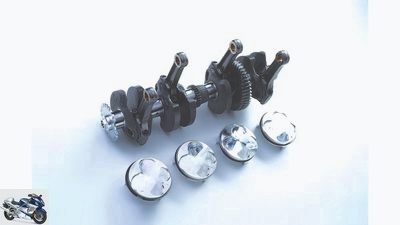 9/25
Many steel parts have undergone fine machining, including the crankshaft, connecting rods, pistons, parts of the transmission. 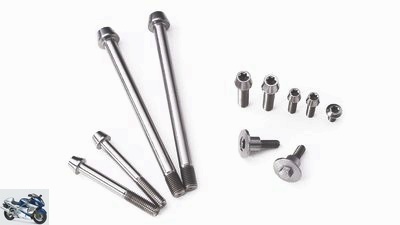 10/25
All bolts and screws are made of stable yet lightweight titanium. This makes a total of minus 1.1 kilograms compared to conventional steel. 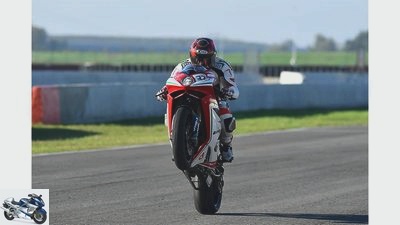 11/25
Conclusion: Fans of the manufacturer from Varese can buy an exclusive piece of MV history with the MV Agusta F3 RC. However, the standard model is financially more attractive and technically just as good. The situation is different with the MV Agusta F4 RC. What a crazy engine, what a crazy sound! In addition, the noble components and the fine workmanship. Despite its quirks, you have to love the F4 RC. 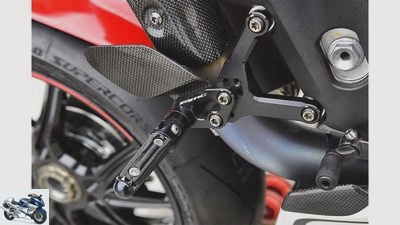 12/25
Footrest system with lettering of the MV Agusta F4 RC. 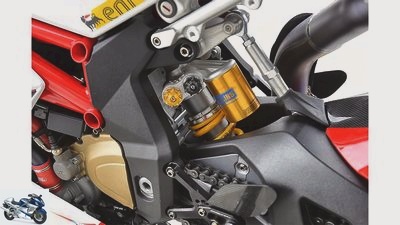 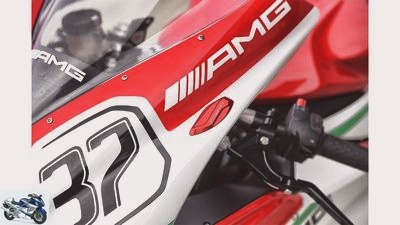 14/25
If the mirrors are removed, the resulting gaps can be filled with fine aluminum parts. 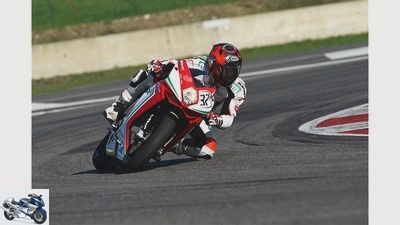 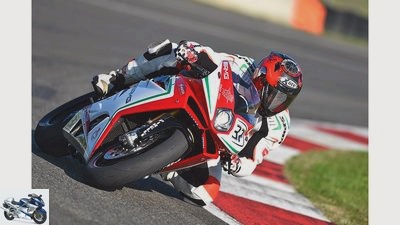 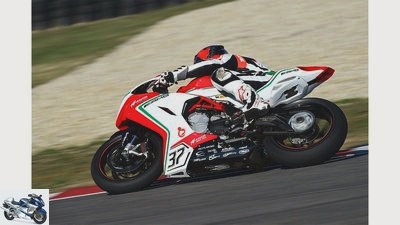 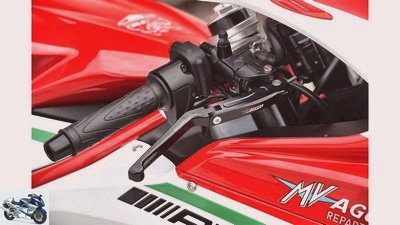 18/25
Foldable and multi-adjustable aluminum levers are part of the optional equipment of the MV Agusta F3 RC. 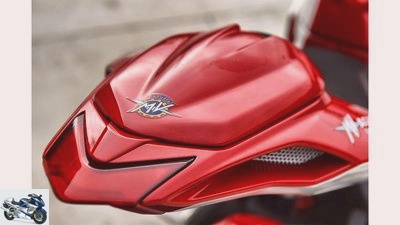 19/25
It’s the finely drawn lines and details that make an MV Agusta
turn off. The RC model of the F3 comes with an extra passenger cover. 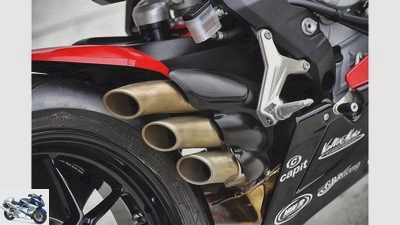 20/25
The flute exhaust symbolizes the three cylinders of the MV drive. But only the aluminum footrests with a particularly handy, non-slip structure are new. 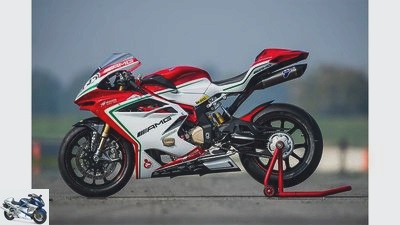 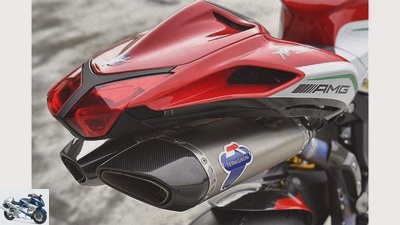 22/25
Mamma mia! Through the open Termignonis of the MV Agusta F4 RC there is a background noise like an old Ferrari racing car. You won’t forget this sound anytime soon. 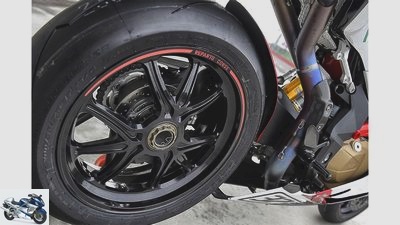 23/25
Lightweight construction and elegant appearance. The forged aluminum wheels were specially developed and designed for the 1000 MV Agusta. 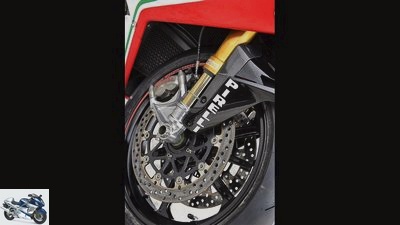 24/25
No compromises on the braking system. The Brembo M50 monoblocks bite poisonously and finely dosed. Late anchoring is a prime discipline of the MV Agusta F4 RC. 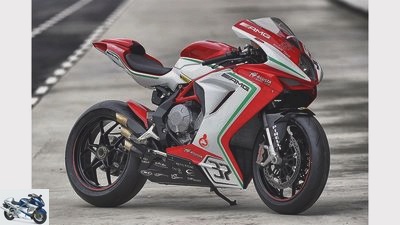 With the limited models MV Agusta F3 RC and MV Agusta F4 RC, MV Agusta offers the World Cup basic models for sale. But looking good is not enough, ladies. So off to the slopes!

Italy, at the end of October this autumn. An inconspicuous truck stands in the fog-shrouded paddock of a smaller racetrack south of Milan. The sliding door of the van opens and reveals a glimpse of the valuable cargo: there are only 350 MV Agusta F3 RCs worldwide, divided into 250 eight hundred and 100 sixty-five. From the MV Agusta F.4 RC were only produced 250 pieces. While you get your mouth dry when you look at the price for the 800 of 17,090 euros, the hammer goes down completely when you find out the amount that MV Agusta is asking for the superbike. The device costs 36,990 euros and has loads of the finest materials and finest components. Who will buy something like this? Well, there are enough financially strong collectors and enthusiasts. The machines are not sold out yet, but almost.

Let’s make it short. With all the consequences, the MV Agusta F3 800 RC drives as easily and sharply as you already know from the basic model. Thanks to the minimalist wheelbase and low weight, it tends to be a bit nervous. You can imagine it like a 600 with a good portion of more bang, but the three-cylinder retains its excellent performance characteristics despite its relatively large individual displacement.

The traction control of the MV Agusta F3 800 RC regulates the slip to level three of eight less sensitively than one is used to from other systems that also work with gyro sensor technology. The translation behavior of the electronic throttle grip to the throttle valve takes some getting used to. The feeling is always a bit vague and indirect. In connection with the “Sport” mapping, the exact dosage of power is not that easy. When accelerating on the intermediate straight, the front wheel accidentally snaps up. The “Normal” motor mapping works better. Here, too, there is full power, but less responsive and more finely adjustable. Sometimes the quickshifter pushes the gears between the gear steps and thereby brings the propulsion to a standstill. All of these quirks are known, and good tuners know effective antidotes.

And the MV Agusta F4 RC?

Only a few tuners, on the other hand, will ever get their hands on an MV Agusta F4 RC for doctoring around, because most of the specimens probably adorn home living rooms or complement exclusive collections. As a homologation basis for the Superbike World Championship, the machine is one of the fastest irons that can currently be purchased from MV Agusta. At the Circuito Tazio Nuvolari, it sweeps down the home straight as if there was no tomorrow, producing a background noise like one of those old Ferrari racing cars. The earplugs are at home on the shelf, but the fascination of the moment whitewashes the fear of impending hearing damage by far. The F4 RC with the Termignoni system and racing control unit should produce 212 hp at 13,600 rpm, both of which are included with the purchase. Over 200 hp seems credible, a performance deficit compared to established sports material – for example from Bavaria – is not recognizable.

Of course, this engine from Varese also runs with a certain basic mechanical roughness when it is stationary, the absence of which would probably alarm rather than delight brand fans. If you open the gas, the elaborately constructed four-in-line with its radially arranged valves and backpack alternator blows resolutely to attack. In the ample middle speed range, you experience a decent increase in power around 7000 rpm. A little later, the variable intake trumpets seem to switch and the MV Agusta F4 RC really gets going. From 10,000 rpm it is all about fire and the dry 175 kilogram light, magnesium and carbon equipped MV marches brutally until it runs into the limiter at around 14,000 rpm. The Varese did a really good job of this engine, Chapeau!

Crouching behind the windshield, you will notice the incredible stability of the chassis, which distinguishes the motorcycle in curves and during hard braking maneuvers. The MV Agusta F4 RC lies as if nailed to the ground. Part of the stability is certainly due to the high-end chassis made of specially coated NIX30 fork from Ohlins including the TTX 36 shock absorber. Despite the tight basic setup, the spring elements respond well and, with one exception, provide good feedback. At least with the cool asphalt temperatures, you poke around with the front wheel when turning in the dark. Probably mainly a matter of voting. MV technician Lorenzo gives two clicks more compression plus one click more rebound damping, which improves the situation.

The age of the F4 concept is noticeable in the radii, when the machine simply no longer wants to be angled more closely and does not change course even with the anger and screeching of the driver. Without supporting gas in slow turns, the MV then shows a tendency to collapse and requires high concentration. The MV Agusta F4 RC does not particularly oppose the narrow Italian course in this discipline. On fast courses like Monza or in Spa, she and the rider would feel more comfortable, who would soon be plagued by physical fatigue. Sooner or later, the F4 RC will kill you! The same game takes place as before with the MV Agusta F3 RC: The “Normal” motor mapping is to be preferred, but the basic requirement for fast laps remains a precise driving style.

How well do the rest of the electronics on the superbike work?

The cardinal question is: How well do the rest of the electronics on the superbike work? Fortunately, quite passable. The electronic throttle of the MV Agusta F4 RC even offers a really crisp resistance, the throttle response is direct and precise. Oh look, it works! Faux pas such as a pushing motor or a traction control that only regulates the slip many meters after the apex of the curve do not occur. Nevertheless, caution is advised at least at low levels three or even one. The black lines from the previous laps show heavy rubber wear and the TC intervenes quite roughly in the action. Blind trust in this system does not want to appear. One or the other time the quickshifter also gets stuck here.

Perhaps a few years ago it would have been better to completely spare the F4 models from having to scourge electronics. Even without them, their fans would not have been less enthusiastic. Nevertheless, the systems in the exclusive F4 RC model seem to have reached a certain degree of maturity, even above that of the MV Agusta F3 RC. Nice for everyone who has a machine like this in their living room.

To save weight, all motor housing parts are made of a magnesium alloy

The MV Agusta F4 RC achieves the maximum output of specified 212 hp at 13,600 rpm only with the Termignoni system made of titanium and a racing control unit, which is not approved for the road. Both are included with the purchase. These accessories alone do not make the roast fat; a whole series of other changes ensure increased performance, weight savings and a particularly harmonious interaction of the individual components. The use of a magnesium alloy made the cylinder head cover, the engine housing and the covers of the clutch, chain, cassette gear, alternator, oil pan, oil filter and other small items particularly light.

Many steel parts have undergone fine machining, including the crankshaft, connecting rods, pistons, parts of the transmission

Gear parts and camshafts were specially reworked in search of the last gram of weight. In addition, numerous titanium screws and bolts save a total of 1.1 kilograms. The entire fairing of the MV Agusta F4 RC is made of carbon. The bottom line is that the limited number of machines weighs 13 kilograms less than the next top model in the MV Agusta product portfolio, the F4 RR. Furthermore, the cylinder head of the RC model has modified inlet and outlet ports.

In addition, the injection nozzles are arranged on two banks and the fuel supply is optimized. Magneti-Marelli components are at work at the top, four Mikuni nozzles at the bottom. To improve the cooling, the cooling circuit works via silicone hoses.

Fans of the manufacturer from Varese can purchase an exclusive piece of MV history with the MV Agusta F3 RC. However, the standard model is financially more attractive and technically just as good. The situation is different with the MV Agusta F4 RC. What a crazy engine, what a crazy sound! In addition, the noble components and the fine workmanship. Despite its quirks, you have to love the F4 RC!