Known first for its F3 and F4 sports cars, MV Agusta has particularly developed its range since 2009, going from 3 to 11 models, notably with the Brutale and the very last Rivale 800. Halfway between roadster and supermotard, the Rivale takes over the famous 3-cylinder (having required 20 million among the 65 million of R&D invested in 5 years) used in the Brutale and the F3 practically without touching anything except the airbox, the exhaust and the electronics. Suddenly, we find almost the same technical characteristics with 125 horsepower at 12,000 rpm (against 148 hp for the F3) and 8.6 mkg of torque at 8,600 rpm. Because MV Agusta announces above all that it has particularly worked on MVICS injection (Motor & Vehicle Integrated control System) based on 3 injectors and mapping, which now offers 3 modes and no less than 8 positions for traction control MV EAS (Electronically Assisted Shift) . So, a revolution, or a simple new look for a truly atypical model? Test on the small roads between Nice and Grasse… 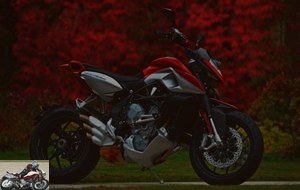 The pencil stroke of the Italian designer is still at work for each MV Agusta model. La Rivale is no exception to the rule, with both an undeniable affiliation to MV Agusta and its own personality, all in curves and spikes. It all starts with the front in a triangle or more exactly in the shape of a shield when we consider the lighthouse and the side schools. 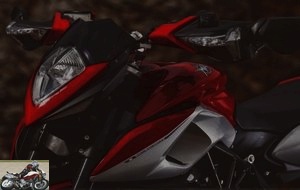 A shape that can also be found on the back. The saddle then seems to be placed on the engine, very thin and elongated, almost closer to a motocross than a road bike. At the rear, we note the double headlight or rather the two V-shaped LED side headlights which are reminiscent of a certain Diavel and more pictorially an open mouth of a rattlesnake.. 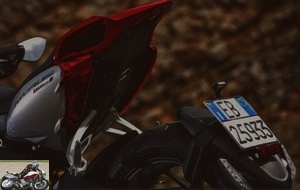 More specific, the indicators placed on the rear wheel flush, highlight a magnificent single-sided arm. We find almost naturally, but still as much appreciated, the 3 side flutes, now characteristic of each model of the brand. We will not forget the engine, particularly highlighted especially since it almost hides the trellis frame. 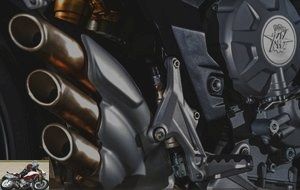 With a very short wheelbase of just 1410mm, the overall impression is very: "compact(e) ". The whole offers a unique, elegant and racy line.

The feet are placed from the very tip for the pilot of 1.70m and this, in spite of a high saddle perched at 881mm. Fortunately, the smoothness of the saddle and a low weight (beyond 178 kilos dry, 191 kilos fully loaded) largely compensate for the height and suddenly, the Rivale is also suitable for small sizes and against all expectations.. 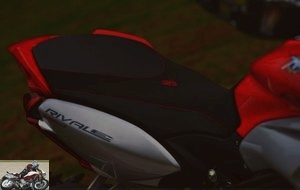 Even the U-turns on a slope are possible without hassle. The hands move away widely to land on the very wide handlebars. The bust leans slightly forward, almost vertical to the handlebars, announcing a position ready for attack. Under the eyes, a large fully digital dashboard offers: easily readable speedometer with very large digits, bargraph tachometer, gear indicator engaged, partial double trip, clock, mode indicator (normal, rain and sport) , traction control number (between 1 and 8) and information messages such as the lap time (triggered from buttons on the left stalk). Everything is perfectly readable, except for the tiny clock that you have to look for a bit. We then adjust the mirrors, placed in the end of the handlebars. They are easily and precisely adjusted, but on the contrary offer limited rear vision, especially since their low position forces you to shift your gaze downwards to leave the road more than usual. It is very aesthetic but a little less practical on a daily basis.

The 3-cylinder snorts gently. The 3 side flutes emit a more discreet sound than their line suggests. If the driving mode is activated in normal by default, we start with the rain mode, with the drache falling for this first test on the small southern roads. The Rivale launches gently, with precision in the dosage of the right grip. The first is both nervous, but without violence. However, the reaction is instantaneous and precise when the throttle is pressed. No jerk here, but on the contrary precision and responsiveness, smoothness including on the gas net for winding. 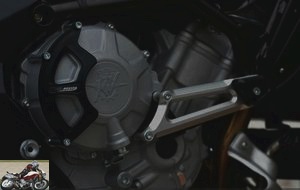 The first is even long enough to take more than 70 km / h without suffering and without wanting to spend the second.

The 3-cylinder is simply amazingly flexible, able to stay in first gear from one fire to another or, on the contrary, to wind up in the last gear at 30 km / h! Admittedly, at 30 km / h, at 1,500 rpm, it’s a bit tight to get out of a roundabout, but it’s okay. In fact, you will more often be between 2nd and 3rd gear. And on these reports, the Rivale looks like a devil wanting to get out of his box at all times, especially in sport mode. Because if the rain mode is really ideal for the rain, bringing the power more gently and less violently, the Sport mode is just edgy, requiring a dosage closer to a sports car than a roadster. But what a treat when you put on the gas! things go and go strong, with a real need for expression that the city is not able to fully satisfy (at least with a few neurons still attached). The braking is largely up to par, rather soft for the rear but powerful at the front and requiring only two fingers to be mastered and effective. Suddenly, the slaloms between the cars are easy, if not the mirrors a little too much on the outside but which fortunately retract very easily while driving. Be careful though if you find yourself stuck in a narrow lane. If the Rivale is light and easy to handle, even when stationary, its turning radius is quite limited and requires an effort worthy of slow.. 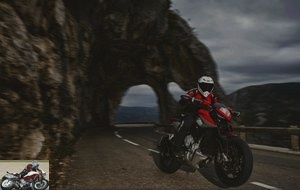 The 3rd rises briskly to investigate the motorway already at the authorized speed limit. The high-speed stability is excellent here and will only be hampered by the total lack of protection and a position rather forward … On the circuit, the Rivale is capable of reaching 245 km / h, a maximum speed almost impossible to reach physically … Beyond the speed limits. Suddenly, you will not feel the French limitation of 100 horses, the clamping being carried out only on the highest speeds.. 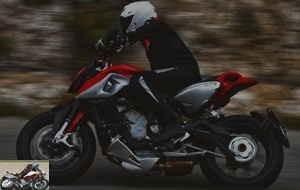 La Rivale is in fact happily returning to small roads. "Calm" under 2,000 rpm, the mill begins to express itself from 3,000 rpm and explodes from 5,000 rpm to then continue to rise furiously up to 8,600 rpm revealing a real ball character nerve-racking without being out of control or making driving feel like a permanent rodeo. The power and the pleasure are just there, controllable under 5,000 rpm, explosive above and even more in Sport mode. The Rivale accepts everything from its pilot, capable even of taking mountain hairpins almost under revs at 3,000 rpm to then climb back up to the next bend with a tachometer capable of climbing to 12,000 rpm at the switch. The frame is imperturbable and allows attacking without behavioral defect. 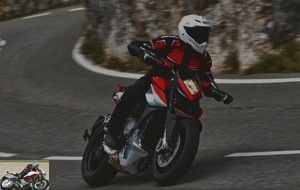 Only the wide handlebars and a forward position can significantly reduce the ardor compared to a roadster or a sports car, in terms of driving position or habit to take on the part of the rider. It must be said that we are really forward and that ideally, it is almost necessary to take a position and a supermotard driving. But in the end, even after two hours of road mix and despite the rain, you get off the bike with the banana, regretting having already had to stop what looks like a merry-go-round. But more than a pretty toy, the Rivale is a damn effective weapon and therefore pleasant for everyday use and not only for the attack on small mountain roads.. 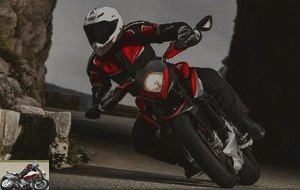 The saddle, thin for the pilot, is wider for the passenger. However, the suspensions are firm and will make you feel the defects of the road. 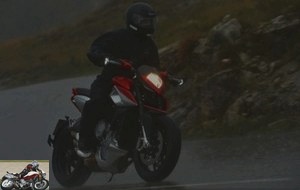 The Brembo double 320mm front discs gave hope for the best. And indeed, feeling and power sum up the excellence of daily braking. Two fingers are enough to control it and with enough power and control. In town, we can even be content with a finger for the front. The simple 220mm rear disc is at most a retarder, capable of engaging traction control in the rain. 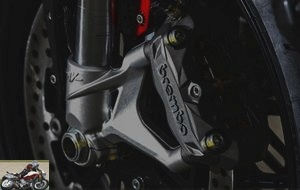 With a 12.9-liter tank, MV Agusta announces a range of 240 kilometers (to be checked during the next long-term test). 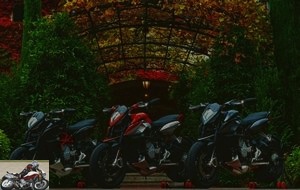 Exceptional could be the best qualifier of this Rivale, as much for its line as for its now perfectly controlled injection engine or its dynamic behavior. An exception that has to be paid, especially for an 800cm3, at 12,690 euros, i.e. one thousand euros more than a Hypermotard 1100 and will reserve it for an elite at the wallet level while with its 3 modes, it will be able to delight a biker as much. with a little experience than a knowledgeable pilot.

At this time, all MV Agusta dealers have received at least one model, to be tested in the dealership. Go ahead and come back to comment this weekend…