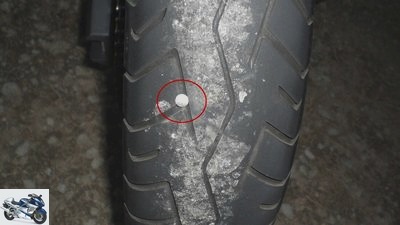 In Hesse, a nail trap presumably placed against motorcycles damaged the tires of four motorcycles. The police are investigating and asking for clues.

It was the first really nice weekend in March and many motorcyclists knew how to use it.

One of them was a group in Hesse, who with four bikes took the B 255 between Gladenbach and the Aartalsee with pleasure on Saturday afternoon on March 25th.

But at the junction of the L 3047 road, where the federal road offers some really nice curves, it happened: Nails and thumbtacks on the road. All four bikes suffered tire damage but came to a safe stop.

The police called by the drivers assume that the nails were deliberately scattered on the road. “Such action endangers human life”, it says in a press release.

The police are now investigating dangerous interference in road traffic and are asking for relevant information:
Who made suspicious observations on the afternoon of March 25 on the B 255 between Gladenbach-Weidenhausen and the junction of the L 3047 shortly before Oberweidbach? Please send information to the Biedenkopf police, Tel. 06461/92950, or any other agency.