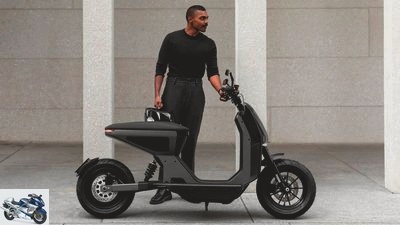 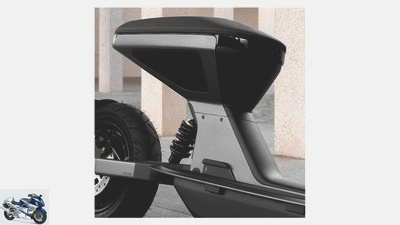 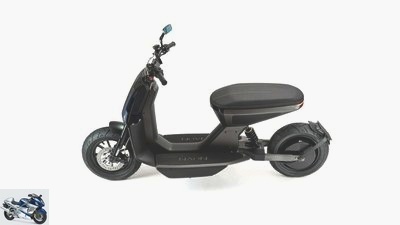 1/6
Functionality, aesthetics and local production – these are the priorities of the Berlin company that developed the Naon, according to the company.

2/6
At the front, the transparent part of the cladding, together with the narrow and angular LED headlights, dominates the appearance.

3/6
The smartphone is integrated into the handlebars as a cockpit, and two-part LED spotlights light up at the rear.

4/6
Because the two removable batteries are located under the footboard, an airy design was possible.

5/6
A lower center of gravity and a helmet compartment under the seat are also possible because the batteries are stowed further down.

It should be functional. High quality produced – even locally. And the Naon electric scooter could also meet the demands of many an aesthetes. We introduce you to the prototype.

Functionality, aesthetics and local production – these are the priorities of the Berlin-based company in product development with a focus on two-wheeled electromobility. So far there is the prototype Naon Zero-One and by the end of 2021 it should be possible to pre-order the series scooter.

On the one hand, the electric scooter will be throttled to 45 km / h in vehicle class L1e (small motorcycles). This variant will cost from 4,920 euros. But the Naon will also serve the L3e light motorcycle class – with a version with a maximum speed of 100 km / h. It then costs from 6,420 euros. 140 kilometers are specified for the range of the e-scooter, the two batteries with a total of 4.8 kWh will be interchangeable, the hub motor should deliver seven kW nominal power and 200 Nm.

Fortunately, because the batteries are located under the running board, not only is the center of gravity low, but storage space is also kept free under the seat, in which there is space for a jet helmet. The aluminum frame is supposed to provide stability, ABS and a brake disc each at the front and rear for safe deceleration.

A transparent shield is embedded in the front paneling, which, together with the narrow and angular LED headlights, visually dominates the front. There is space behind the cover on the handlebars for the smartphone and then also functions as a cockpit.

In addition to functionality and aesthetics, the Berlin company also emphasizes the focus on the sustainability of its electric scooter: “We use a single-origin aluminum frame as the basis for our Naon Zero-One. Although this frame requires more water and energy to manufacture than a steel frame, it saves resources in the subsequent phases. Less energy is consumed during use because it is lighter. The frame is constructed from separable elements so that it can be repaired and reused more easily in the event of damage and, above all, easily recycled. The surface is not refined with chemically complex lacquers, but receives long-lasting corrosion protection through an anodized layer and saves time-consuming processing before recycling. For the add-on parts, we again use unpainted plastics, which can be separated according to type and reprocessed into raw material without any loss of properties.”

In addition, particularly sensitive or stressed parts should not only be designed to be particularly resistant, but should also be easily replaceable if the worst comes to the worst. Every customer should be able to bring his or her electric scooter up to scratch after a while if he or she wants to.

The company also includes the topic of recycling in development and production: With the Naon Zero-One, for example, waste products from the manufacture of carbon parts and the shredded material from used tires are to be used the use of raw materials that can be recycled without loss.

Naon provides the following information on the subject of local production: “Overall, we make sure that we set up the shortest possible logistics chains for our first production in the greater Munich area, i.e. find local partners. With batteries in particular, we are in the process of building up a cycle system with old batteries in order to use the valuable resources and the complex production as well as possible and to save them from the blast furnace at the end of the battery life.”

It has been noticeable for some time that with the component “Electric” In addition to the already known and functional concepts, more and more new scooters are being presented, which consciously show that this vehicle class is not just about functionality and low prices. A modern scooter driver can have high aesthetic demands on his vehicle – and is increasingly willing to pay the price for it. In the end this is always a matter of individual taste, regardless of this, diversity is definitely to be advocated.