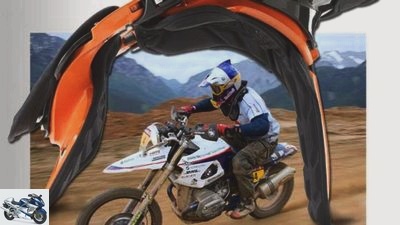 The protection of the cervical spine: so far a gap in the driver’s equipment. Some manufacturers want to change that and are now giving the okay for interesting systems to be launched on the market.

It wasn’t a speeding accident.

Marco R. from Hamburg drove straight ahead on a barren country road at 90 km / h in the summer of 2006. His partner traveling with her machine suddenly got stuck in his, Marco suddenly flew over the handlebars and hit the asphalt head first. Neither the helmet nor the carefully selected combination with protectors could prevent an injury to the unprotected cervical spine: a broken neck. Marco survived, and after a complicated operation he is a few titanium parts richer, but does not have to accept any loss of freedom of movement.

Not everyone is so lucky in such a major, but not uncommon, disaster. Reason for some manufacturers to close the gap in driver equipment. First and foremost BMW and KTM, who have been dealing intensively with the matter for around two years and even cooperate instead of competing. At BMW it was the contact with the South African doctor Dr. Chris Leatt, who has been researching effective protection for the cervical spine for years. However, Leatt was only able to translate his ideas into hand-carved plaster prototypes. At BMW he found decent laboratory conditions, including a dummy with sensors that provided biomechanical knowledge.

A computer was fed the dummy data obtained and the results were compared with virtual simulations, which theoretically simulated many more different accident situations than the dummy. Finally, in late summer 2006, the patented protection system known as “NeckBrace” was found to be ready for the market. “It’s not a panacea for a broken neck, but we’ll find it
better to do anything at all than to stand idly by. Hopefully the topic will slowly start to boil and other manufacturers will follow suit, ”explains BMW Product Manager Andreas Geisinger.

At KTM, it was largely the commitment of the racing managers and ex-professionals Heinz Kinigadner and Pit Beirer. The latter has been paraplegic since a motocross accident in 2003, and Kinigadner’s brother and son have been paraplegic since serious accidents as well. After the two experienced factory rally drivers Richard Sainct and Fabrizio Meoni were killed in racing accidents due to a broken neck in 2004 and 2005, KTM saw a need for action. “When we came across the Leatt system being tested at BMW, we were very prudish,” Kinigadner explains the pact between Bavaria and Austrians.

The factory rally drivers in particular should provide regular feedback. Of course not as crash test dummies made of flesh and blood, but the probability ?? As macabre as that may sound, the fact that the rallies lead to corresponding accident situations is comparatively high. In any case, the French star pilot Cyril Despres willingly made himself available as one of the first “neck brace” testers. Not least because the death of his friends and teammates Sainct and Meoni particularly affected him. When Despres fell badly during a training session and, in his opinion, the new system literally saved his neck, it was clear to him: not a meter without it. “You get used to the system as quickly as you would to a helmet or a breastplate,” is how ex-motocrosser Pit Beirer sums up the experience reports of the KTM factory drivers.

The manufacturer promises only minimal losses in freedom of movement Dainese for his product. The Italians, pioneers in the field of protector technology, see in their new top jacket »G. Neck «with integrated neck support, however, is not a passive protection system, but refers to what they consider to be an increased active safety through relaxation of the neck muscles.

Suppliers like Polo, on the other hand, rely on cheaper solutions and have simple foam collars in their range that they obtain from suppliers without having to develop their own. “We did some research in Internet forums and found positive experience reports there,” explains Polo, and they firmly believe in increasing the driver’s passive safety with the “Race Collar”.

Accident researcher Florian Schueler, however, doubts the effectiveness of some systems that are now increasingly entering the market. “Of course, simply hanging a foam ring around your neck is not enough. However, intelligent design that takes into account all potential injury mechanisms does not have to be expensive. It’s not a well-designed child car seat either, ”he sums up.

After his broken neck has healed, motorcyclist Marco wants to get back on the road with his bike and at the start of the season is thinking about the ideal rider equipment: »For a long time I thought back protectors were superfluous. After the accident, I was glad to have worn one after all. Now I would also wear a neck protector to reduce the risk of injury. And hope that it will bring something? even if I never want to experience it firsthand again. ??

MOTORRAD has tried the inexpensive collar made of foamed material with a cover made of polyester and a snap fastener at the front in practice. When driving on the racetrack, especially when hanging-off with your head bent to the side, it severely restricts your freedom of movement and worsens the ventilation in the helmet (visor steams up quickly). In a touristy, upright sitting posture, it hinders the shoulder look. Polo advertises, the race collar
reduce the risk of injury, but this is not proven by test results and has no reliable information on whether the changed leverage forces on the edge of the helmet could possibly have a negative effect.

The idea is to slow down head movements in all directions in the event of a fall and to avoid extreme bending of the head. This is intended to minimize the forces that act on the cervical spine in the event of an accident. At the same time, freedom of movement will be restricted as little as possible, promise the providers. To achieve these goals, they rely on a multi-part, around 700 gram construction made of carbon, Kevlar and plastic, which is partially covered with shock-absorbing foam. The system encloses the cervical spine over a large area, but does not rest against the helmet during normal head movements and allows air. Two quick-release fasteners must be used when putting on and taking off. BMW and KTM could ?? at least in the laboratory ?? prove that force peaks can be reduced by up to 40 percent.

Since October 2006, 150 pre-series jackets have been offered in Germany with an integrated, four-part plastic neck protector (with a free navigation device as a bonus to the purchase), which, however, only slows back movements slightly and has a more supportive function. Buyers of the jacket, which takes a bit of getting used to, can submit suggestions for improvement to Dainese. Some have already been incorporated into the models currently on sale. The Italians also have a protector shirt with the so-called Neck-4 structure (see detailed picture) in their range.

Mr. Schueler, as a scientist, how do you rate the current commitment of some manufacturers to close the gap in »neck protection« in motorcycle rider equipment?
Any approach to increasing injury protection is welcome-
worth. Of course, this also applies to the cervical spine, which has a particularly vulnerable structure? after all, the head is up
on it! However, every system of injury protection should be subjected to a complex protection target analysis, which among other things asks questions about accident statistics and injury mechanics and can hopefully answer satisfactorily.
What does such an analysis look like??
Biomechanical research should first ensure the effectiveness of the product and exclude counterproductive functions. Systematic
Accident investigations or individual case analyzes with injury findings that prove that such a protective system could have protected against cervical spine injuries are not known to me in the present cases. Obviously, even in dramatic accidents such as the Dakar rally, there were none
Objectively informative analysis of the origin of the injury. In such falls, the “pushing forward” of the proportionate body mass does not primarily endanger the head, but rather the cervical spine as well as the muscles, ligaments and tendons of the head-supporting apparatus. This can lead to fractures of the base of the skull including rupture of large blood vessels? for those affected, any help often comes too late. A system for the relative fixation of the head could possibly save lives in the desert, but whether it will do the same in the everyday environment of motorcyclists in our part of the world has to be doubted. And on the racetrack, there is no substitute for a fall area!
And what about the active safety that such a system under certain circumstances relieves the neck muscles and thus enables stress-free stages?
I haven’t tried these systems yet, but I ask a counter question ?? as a motorcyclist, not as a scientist: Is that even a
Topic? I myself occasionally drive several hundred kilometers at a time. at
brisk drive, but the needle not at the stop, the loads in the neck area were always in the green for me. I have also not heard any complaints from other drivers in this regard. In my opinion, the aerodynamics of the helmet are of greater importance here, as we did recently on behalf of the federal government-
could investigate an institute for road affairs. In addition, it should be possible to look over the shoulder at any time? if a system hinders this, it would become the active one
Even affect security.
So do the new neck protection systems bring the manufacturers money, but no benefit to the wearer?
No, I don’t want to be understood that way. Conscientious system development, scientific product certification and well-founded information-
Statements on this would provide a solid basis for decision-making. Every motorcyclist should weigh up whether the desired protection potential is in a healthy relationship to possible losses in active safety. It is also to be hoped that such a protection system does not drive up the already considerable costs for personal protective equipment too much? even if security has its price!