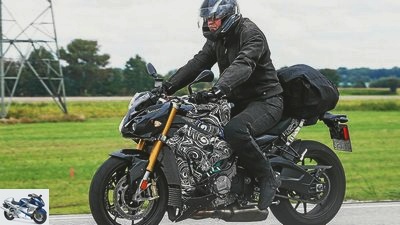 New items for 2014 from BMW, Ducati and Suzuki

With the EICMA in Milan, the most important trade fair of the motorcycle year is coming up. There we get to see a lot, as the prototypes show in the javascript: {} final stage.

She was probably on one of the last voting trips. The new, undisguised BMW based on the superbike S 1000 RR should finally be shown at the Eicma in November and left to the press for a test drive this winter. The test driver looked correspondingly annoyed when he curved in front of the lens of our paparazzo. The complex, asymmetrical cockpit lamp unit looks final. Technically interesting is the large radiator, for which the side panel has been pulled down far. Where there is a lot of cooling, there is a lot of power, it is generally said and in fact one hears from BMW circles that the naked bike should have around 180 hp – with less than 190 kilos full of fuel. PS subscribers can use their login data to add a few more pictures of the Erlkonig at www.motorrad-helden.de see. 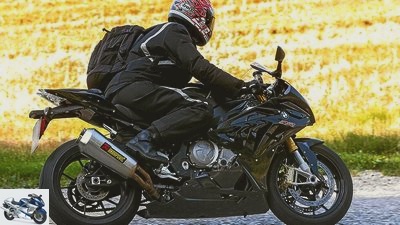 Obviously, the S 1000 RR has also been improved quietly and secretly. Although it is still the ultimate in the 1000s, BMW probably wants to counter the offensive from Honda, which will probably bring two superbikes for 2014 at the same time. On the Erlkonig you can see a new exhaust system, which – if the sticker gives a different impression – certainly should not come from Akrapovic, as well as a changed frame. The chassis looks different around the pivot point than on the current model. New findings from the Superbike World Championship should be responsible for this. 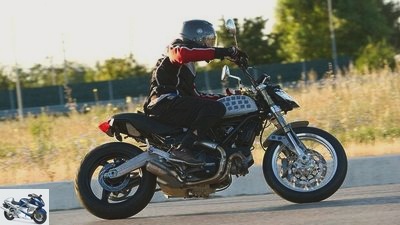 Ducati’s Erlkonig suggests that they are developing the scrambler in Bologna. But in which direction?

at Ducati In addition to new monster models, there is a lot about the scrambler. As already read in PS 10, Ducati is building a retro model that is based on its own scramblers from the 60s and 70s. The youngest Erlkonig, who drove in front of the lens in Bologna, shows, however, that there will probably not be a raised exhaust system like back then. A tubular steel swing arm now also seems rather unlikely. However, the different wheels indicate that individual components are being experimented with. So there should still be some big question marks. However, the air-cooled engine will probably be used, and the small tank on the tubular space frame is really stylish. The bench also matches the scrambler look, which cannot be said of the plastic pulpit. So let’s wait for the next Erlkonige and the fair – there you always hear something about possible innovations. 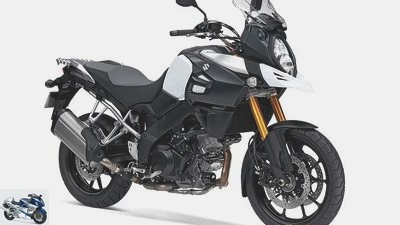 The sign of life from Suzuki is called V-Strom 1000 and still offers little sport.

The Suzuki V-Strom 1000 in Milan will no longer be a surprise. Suzuki already presented the fun bike to the press at Le Mans. The Japanese manufacturer is finally back with the model after a long dry spell. However, the V-Strom is located below the Big Bikes in the BMW GS, KTM Adventure or Ducati Multistrada segment. The first ride for what is supposedly the lightest model among the long-legged, travel-friendly fun bikes is at the beginning of December. Sports fans unfortunately have to wait a little longer for new products from Suzuki.