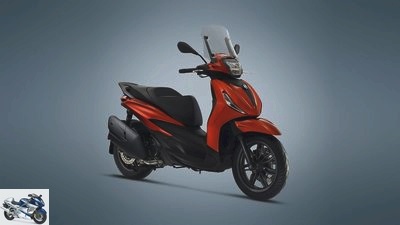 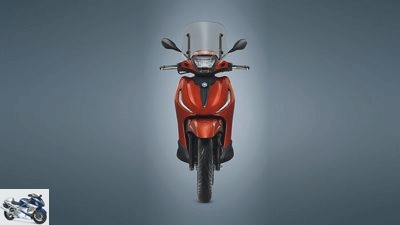 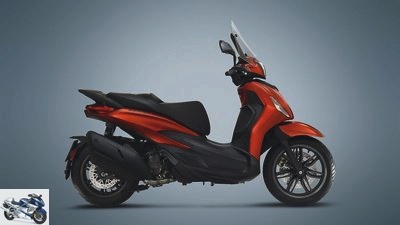 2/12
LEDs provide all-round visibility and, above all, visibility.

4/12
The scooter is available in the colors Bianco Luna and the two new colors Blu Oxigen and Grigio Cloud. 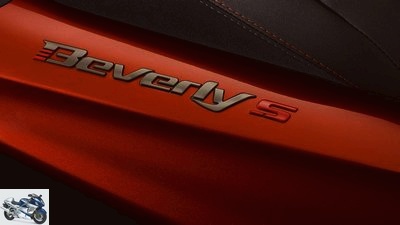 11/12
Both new beverly come with a keyless system.

12/12
The Piaggio connectivity system Mia, which enables smartphone coupling via Bluetooth, is only standard on the 400 series.

The new Piaggio Beverly comes in two sizes – one with 300 cm³ and one with 400 cm³. Both scooters are homologated to Euro 5.

2001 rolled the Piaggio Beverly in its first generation. Not that there hasn’t been a facelift in the past, but the Beverly is getting on a bit now. With Euro 5 there was now an unavoidable reason to extensively revise and freshen up the Beverly 300. 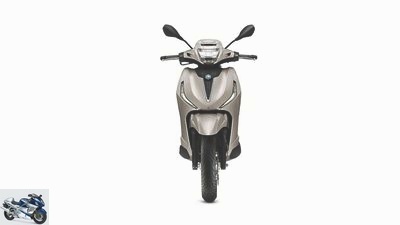 The Piaggio Beverly is available in a range of glossy colors including Bianco Luna and the two new colors Blu Oxigen and Grigio Cloud.

In the model year 2021, the keyless system should apparently no longer be missing on the large scooter, so both new Piaggio Beverly are equipped. Start the engine, open the storage compartment under the seat, unlock the fuel filler cap and activate and deactivate the steering lock – all of this works as long as the key is on the driver, for example in his trouser pocket.

A 5.5-inch LCD instrument panel is emblazoned in the cockpit, which also controls the new Piaggio connectivity system called Mia. The Piaggio Beverly 400 comes with it as standard and enables, for example, smartphone coupling via Bluetooth. 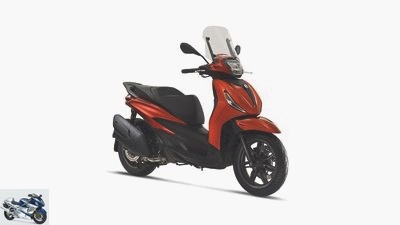 The Piaggio Beverly S is characterized by matt surfaces and a black seat made of two different materials as well as dark gray rims.

Headlights, indicators, rear lights and additional position lights on the front use LED technology to ensure visibility and visibility. As with many motorcycles, the license plate holder is located on the cover just above the rear wheel. The rims in a sporty 7-spoke design are also new, while the seat cushion has a double cover and double seams.

The Piaggio Beverly is available in a range of glossy colors including Bianco Luna and the two new colors Blu Oxigen and Grigio Cloud. The paintwork is combined with light and warm surfaces in metallic tones and light gray rims.

The Piaggio Beverly S is characterized above all by matt surfaces in graphite gray. There are three finishes to choose from: Argento Cometa and Nero Tempesta – both matt, as well as the original and glossy color Arancio Sunset. The S version also has a black seat made of two different materials and dark gray rims.

The Piaggio Beverly was getting on in years. It’s great that it was completely modernized as part of the Euro 5 homologation.