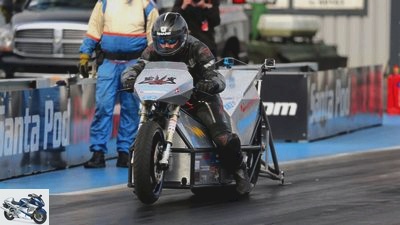 3/5
The Danish racing team had nine runs from September 11th to 13th for their record attempt.

4/5
With 6.86 seconds they set a new record for the quarter mile sprint with an electric motorcycle.

5/5
The races took place at the Santa Pod Raceway in Bedfordshire, England.

New quarter mile sprint record with an e-motorcycle
From zero to 100 km / h in 0.9 seconds

In September 2020, the Danish racing team True Cousins ​​set a new world record for the quarter mile with an electric motorcycle with the Silver Lightning.

1,200 kW. Or 1.2 MW. Or 1,632 hp. The performance is tremendous – regardless of the unit in which we express it. The performance data belong to the Silver Lightning – the drag racing electric motorcycle of the Danish racing team “True cousins”. It set a new sprint record for the quarter mile with 6.86 seconds. Previously marked the 6.94 seconds of Larry McBride and his “Rocket” The sprint record with an electric motorcycle for over eight years.

The True Cousins ​​racing team attacked Santa Pod Raceway in Bedfordshire, England over the weekend of September 11-13. They had nine runs to attack the record. It took Hans-Henrik Thomsen, who drove the Silver Lightning, seven runs to break the record on the quarter mile: 6.87 seconds were on the clock.

But the other two runs were not wasted. For the penultimate run, the racing team increased the performance of the motorcycle again, but this only led to more slip and a worse time. So, performance for the last run down again, also lower the tire pressure a little and bang, Hans-Henrik Thomsen undercut his own best time by a hundredth with 6.86 seconds.

The Silver Lightning also reached a top speed of 314.2 km / h. For her front part she used one Yamaha R1, the rest of the electric drag racer, is an in-house design by “True cousins”. By the way, they sell particularly powerful starter batteries full-time, which they recommend especially for road and drag races as well as for rallies and classic cars.