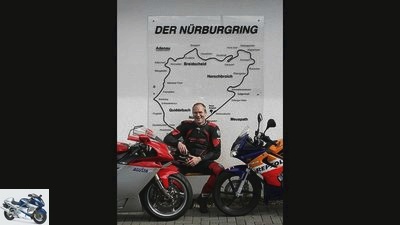 They embody the extremes in sports motorcycle construction, the beginning and the summit: the Honda CBR 125 R and the MV Agusta F4 1000 S. Anyone who drives them on one of the most difficult racetracks in the world, the Nurburgring-Nordschleife, takes the same things differently true and is in the same place in two different worlds.

And is amazed at the effects of driving dynamics.

The Aremberg curve is a friend. Slightly elevated, it makes it easier to go downhill in full incline, its wide radius allows a high basic speed. The load change in the middle of the curve is smooth, at the exit old-fashioned, steep curbs nudge the machine gently but firmly back onto the track.
Then all hell breaks loose. The 1000cc four-cylinder cracks like a raid. Crazy, you unleashed it yourself and yet you are taken by surprise, just a passenger for an endless split second. For the steering impulse to the left it is still enough, for the supportive pressure from the footrests to the front, because the top is already there, oh what, over, the front wheel sticks into the air ?? on a 14 percent gradient ??, and the handlebars turn into nasty clubs.
The third is turned off, now the fourth ?? is that full throttle? Ah, the throttle must have slipped through the palm of your hand again, it doesn’t matter. Those who claim to be fully charged with a 1000 are lying anyway, and the compression down in the sink is bad enough too. For a blink of an eye, the front wheel goes uphill, the rear wheel down, and the middle bends. Above all, the driver knocks on the tank so that he is breathless. Anyone who carries a cell phone and wallet in the breast pocket of the racing suit can get bruises worth seeing on their ribs. The data recording shows 241 things later, as the best of three measured values ​​at the bottom of the Fuchsrohre. They remain unique to me, I promised myself that. On the 125cc, it smells of damp grass and wild garlic. Although the day blooms under a rather overcast sky, individual dewdrops sparkle out of the green strip. Even with a tense crouching posture, the perception does not narrow to a point far ahead. An eighth-liter displacement, one twelfth of the output of the MV leaves time for more than the fear of missing the next braking point. And it becomes clear that the name of this route section is actually only correct beyond the 200. At 130 km / h in over-revved sixth gear, the little CBR 125 R roars at most. The Fuchsrohre, on the other hand, is no longer a tube, but a wide forest aisle. And compression can only be felt by the hectically oscillating piston of the youngster racer in the Fireblade dress. I have time, a lot of time, to look for the ideal line, the penultimate bend in the Adenauer Forest very tight and to take the momentum with me onto the next straight. Destroy momentum, slowly, slowly, the MV shoots towards the mine with infernal force. “Stay out of the mine for a long time” is one of the doctrines of old Nordschleife hands, usually with a meaningful expression in the evening while drinking Kolsch. Have they ever been on the road with a current thousand and far more than 150 hp? In any case, I’m happy to stay on the asphalt at all, on the hilltop in front of the braking point the front wheel became very light again. So cut straight through the beginning of the right-hand curve, brake hard and then don’t tilt too far to the right of the orthodox turn-in point. Classic Nordschleife school, on the other hand, on the Honda: Just beyond 100, it is no problem to circle for a few seconds in a slight right-hand leaning position thirty centimeters from the left (!) Edge of the track. Then the machine not only hits the drawn-in point accurately, but also passes it at a favorable angle to the curve. Slow down in style according to the line of Nordschleife guru Helmut Dahne.
Then the most mysterious part of the route begins, the Kesselchen, the Klostertal. Only the really slow will discover it. The fast suck it away along with the ascent, hardly notice its crisp incline, blurring the chain of hills left and right at the edges of their field of vision. Together with the impression of the beauty of this high valley. Where after a short downshift the MV circles a rock nose in a wide curve to the left, beyond the 160 draws three dark gray lines in three laps, the Honda driver looks away from the oh-so-important ideal line to the right. In a shady, damp valley floor. Although his little single cylinder purrs tightly uphill, he can hear the birds chirping downstairs.
Of course, the Nordschleife is a race track, not a nature trail. Anyone who comes there and does not at least drive quickly to the best of their ability has missed the topic. Anyone who is chauffeured in a coach doesn’t understand anything. But the calm pace on the Honda despite all the driving efforts brings back to the MV’s agitated awareness of why this route is so unique: because of its closeness to nature. Because it was not imposed on the topography, but rather placed in it. Most of the parts could have grown out of the ground as they are. And the teaching of the MV? Nobody needs that much power on the Nordschleife. Even if it is moved a gear or two too high, it is always as fast as it should be here.