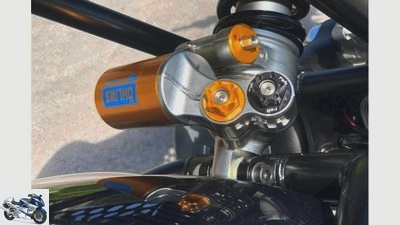 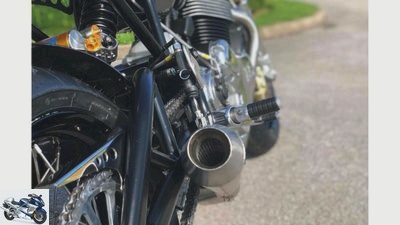 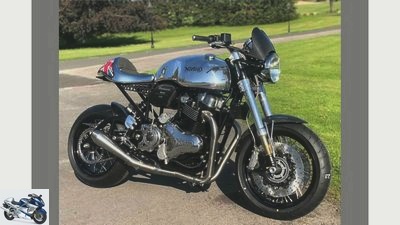 1/7
Norton brings the Dominator as a special Street model.

2/7
Only 50 copies will be built, all of which are reserved for the British market.

3/7
The Street is equipped with a tall tubular handlebar and a small flyscreen.

5/7
The two-cylinder is allowed to exhale through a new 2-in-1 system.

7/7
The Norton Dominator Street special model costs the equivalent of around 24,240 euros.

Shortly before the bankruptcy of the British motorcycle manufacturer Norton, its boss Stuart Garner apparently sold the 961 Norton twin to China.

Like the Chinese motorcycle portal www.motorfans.com.cn reported, the Chinese two-wheeler manufacturer Jinlang acquired all rights to the Norton-Twin 961 and all tools necessary for its production in December 2019. Norton boss Stuart Garner personally arranged and handled the deal. A selling price was not given. In February 2020 Norton then file for bankruptcy. The total debt is over 30 million euros. Stuart Garner himself has largely disappeared since then. Since the engine was sold before the bankruptcy, it remains unaffected by the bankruptcy.

Norton’s 961 engine is an air-cooled twin that mimics a 90-degree V2 with a 270 degree crank pin offset. The two-cylinder is used in the Norton Commando and Dominator models. Homologated according to Euro 4, it develops 72 hp and 67 Nm of torque.

Jinlang is planning new motorcycles of its own

Jinlang has so far mainly built scooters and motorcycles in the segment up to 125 cc. Jinlang also manufactures for the Chinese motorcycle manufacturer Zongshen – with which Norton has an engine deal for the new 650 twin – and the American Polaris group as the parent company of Indian Motoren. Around 300,000 vehicles and 800,000 engines roll off the production lines at Jinlang every year.

Around the new Norton 961 engine, new models are to be developed in cooperation with Italian designers and later marketed globally.