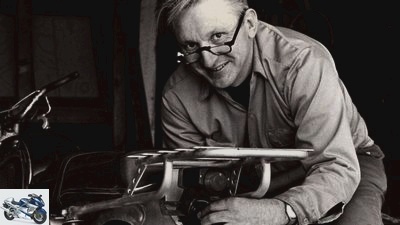 “Zen and the art of maintaining a motorcycle” made the American world famous. Even if not everyone could do something with the bestseller. An obituary for Robert M. Pirsig.

Anyone who has already consciously experienced the 80s knows at least the title of the book. “Zen and the art of maintaining a motorcycle”, First published in the USA in 1974, it was a world bestseller. Even if he polarized. Some loved and adored the book. The others tormented themselves with philosophical consideration of air filter changes and the transcendence of valve settings. Much of the partially autobiographical description of Pirsig’s motorcycle trip with his son Chris through the USA during the hippie era remained incomprehensible. Those who expected an adventure story often asked themselves a different question than the one Pirsig was looking for – and gave up after a third of the 450 pages.

Before it was first published, over 120 publishers had rejected the manuscript by the American, who was born in 1928, said the shy Pirsing in one of his rare interviews. But the book made the studied chemist and philosopher world famous. Robert M. Pirsig acquired his knowledge of the Far Eastern Zen philosophy in India. In his homeland, the American was considered a talented mechanic and worked, among other things, as a technical journalist. He finally combined all of this knowledge in the first of his only two books.