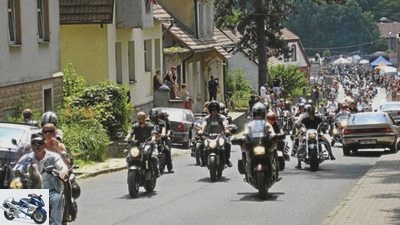 On the go: Biker Festival and Bazaar in Poland

Out and about in Poland
Biker Festival and Bazaar in Poland

Poland is not in the east, Poland is in the middle of Europe. The Polish motorcycle scene today combines the best of two worlds: the (motorcycle) technology of the West and the (party) culture of the East. MOTORRAD attended two typically Polish biker events.

So, you want to go to Poland? Well, don’t let anything steal from you then!” Ha, ha, ha. A roar. And totally new. But even the most open-minded German motorcyclist may start pondering a little before his first trip to Poland: Isn’t there something to all of the lousy old stories after all? How far is our neighboring country still in the Eastern Bloc? Is there even a motorcyclist scene there? Our tour to the “Moto Weteran Bazaar” in Lodz and the subsequent visit to the “15th Festival Rock, Blues & Bikes” in Lagow should bring us up to date with the latest information. And – so much can be revealed – the events did this in a way that is highly addictive.

Out and about in Poland
Biker Festival and Bazaar in Poland

But before the inclined MOTORRAD reader should also be hooked, there are two statements here and now that are essential for understanding Poland as a travel destination. First: The Poles never saw themselves as part of the Eastern Bloc. They were made after World War II “forcibly incorporated”, previously Poland was a culturally and socially pulsating part of (Western) Europe. Second: The “turn” in Poland, that is, the disempowerment of the communists, was almost 20 years ago. 20 years! There is now a generation of motorcyclists who “Eastern bloc” only knows from history books.

At the beginning of July, a surprising number of representatives of this same young generation ended up in Lodz, the second largest city in Poland, which is located in the middle of the country and yet only 375 kilometers from the German border. At the beginning of January, May, July and September there goes the “Moto Weteran Bazaar” across the stage. What began in 1992 as the sale of surplus spare parts among the extended circle of friends of some oldie fans has meanwhile become by far the largest classic car market in Poland. In figures: each time over 700 exhibitors, from professional dealers to grandpas who cleaned out his basement, and around 15,000 visitors populate the area around the dilapidated football stadium “begin” in the north of the city. The essential things, i.e. files, allocation of stand space, sanitary facilities and catering are organized professionally. All the rest, i.e. the range of goods and the type of presentation, is a wonderful mess. 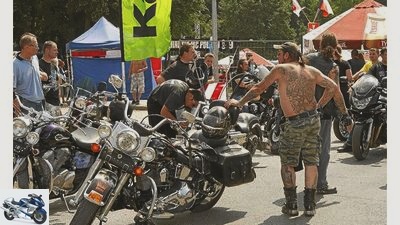 The thing with the gray two-stroke monotony was 20 years ago in Poland too.

There are wonderfully restored oldies and exotic species that are almost unknown in this country alongside mercilessly fried Wehrmacht team fakes. Busts of Adolf H. and Josef S. are offered as a matter of course, and license and naming rights are laid out rather casually. A few meters further there are rare Zundapp and BMW spare parts, and anyone who happens to need a dummy machine gun for the sidecar will also be served. Militaria in all imaginable varieties meet countless potential youngtimers and ingeniously crazy self-made vehicles. Fall parts and replacement motors for Japanese super sports cars of the 1990s are literally in the truest sense of the word in abundance. The term “veteran” applies to everything that is more than ten years old. It doesn’t go anywhere “politically correct” too, many things would be absolutely unthinkable in Germany. But if you are not exactly a professional and have retained a certain degree of anarchic curiosity, you will have fun in Lodz. The area is extensive, there is no pushing or jostling anywhere, and yet the inexperienced visitor from the west is completely exhausted in the evening – six or seven hours of really big movies take their toll.

A completely different film will be shown on the same weekend 330 kilometers further west and thus only 45 kilometers from Frankfurt / Oder: for the 15th time, the “Nine Six Poland MC” invited to the rock, blues and bike festival, the largest biker meeting in Poland. With eight chapters, the 96ers are one of the most influential MCs in Poland. Not one percent, but seasoned, cowl-wearing bikers. And these tough guys and their 4,000 or so guests celebrate in the midst of a rural community with 5,000 inhabitants, picturesquely situated between two lakes, which was German until the end of World War II and the summer resort of Berlin. Even today, Lagow lives mainly from tourists – and from the bikers who visit the small town for four days “Daytona of Poland” make. 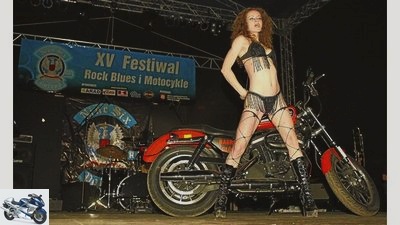 No, that is not the end of a cultural contribution. Fortunately, it’s just the beginning.

Lagow is a neutral area, clubs that can get stressful with each other elsewhere celebrate together here. The secret of this success? On the one hand, the 96ers are strong enough as the host MC and are not associated with any of the one percent top dogs. On the other hand, they rely on an ingenious concept that actually leaves visitors no time for boredom and to get stupid thoughts. With the classic meeting program items strip show, mud puddle, beer mushroom and cover band, it is not enough in Lagow. The bikers are offered a cultural program of the finest quality. 2010 went “only” 15 bands at the start, usually over 20. The Poles have always been a very culture-loving people, and that is exactly what the character of the event benefits from, the bikers enjoy earthy blues and driving jazz rock. And immediately after the strip show at midnight, they enjoy the guest appearance of the touring troupe of the world-famous Bolshoi Ballet. Ballet? What would probably lead to boos and shouts of undressing and undressing at every German meeting is rewarded here with standing ovations and requests for encores.

With crisp blues rock it goes on through the night, and those who are still fit the next morning mingle with the normal vacationers and have fun on the water. A clever move by the organizers ensures that a surprisingly large number of meeting visitors are still lively: that “All inclusive concept”, this prevents lively alcohol consumption from turning into serious binge drinking. Around 80 percent of the visitors come from Poland, but some bikers from the greater Berlin area and Scandinavia have already discovered this somewhat different meeting. The 96 presi Zgred and his guys are doing a lot to ensure that more will come and that four days will turn into a whole festival week.

Veterans market in Lodz and bikers’ meeting in Lagow – as different as the events are, they are united by the motto “Motorcycle fun”. The sympathetic Poles understood pretty well how this could best be implemented. 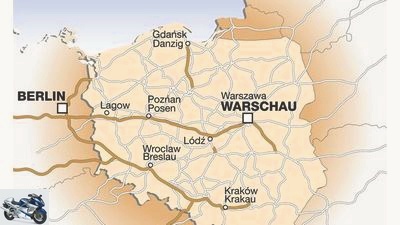 Map of Poland with main highways.

Poland is our direct neighbor, entry is just as easy as it is to Denmark or Austria. But in Poland it is much cheaper.

Getting there:
For once, the direct route is the best. Coming from Berlin, it goes on the A12 shortly after Frankfurt / Oder without control over the border always east. From the border you drive on the two- to three-lane European road 30, the most important transit connection to Russia. The completely overcrowded street is a real test of patience for the first 100 kilometers, but before Poznan you can switch to the excellently developed and wonderfully empty Autobahn 2. It is subject to a toll, but the almost nine euros to Lodz is always worth it.

Traffic:
Poles drive – to put it cautiously – usually much more aggressively than German road users. Their willingness to take risks is often blatantly disproportionate to their driving ability. So be careful! The speed limits (50/90/130 km / h in / out of town / motorway) are often only regarded as a rough guide by the locals, but are understood as binding by the uniformed police officers. The alcohol limit is 0.2. Residual alcohol after a biker meeting can quickly become an issue – and the police know that too!

Stay:
Outside of the cities, you can find simple accommodation for as little as ten euros per night. In Lodz, however, it is worthwhile to take a hotel right in the center (around 60 euros), as close as possible to the “Uliza Piotrkowska, the really worthwhile promenade in the city. At the meeting in Lagow, a “All inclusive package” for 140 or 120 zloty (man / woman), the equivalent of 35 or 30 euros. There is a guarded campsite, a guarded parking lot (exit only sober and upon presentation of the papers!), Ten large beers, on Saturday lunch and dinner (rich, hearty, tasty) and on Sunday breakfast as well as four days admission to the Festival site. This system creates a solid basis for all participants and prevents the fatal sobering-up stomach binge. If you don’t want to camp, you have bad cards in Lagow, most of the pensions are occupied by regular guests. In Gronow, around three kilometers to the south, the four-star hotel Bukowy Dworek (www.bukowydworek.pl) is a good alternative that can be paid for at 40 euros per night. Then take a taxi to Lagow.

Money:
The euro is still a long time coming in Poland, the payment method is the zloty (four zloty is about one euro). The exchange offices (“cantor”), which can be found en masse on every major street.