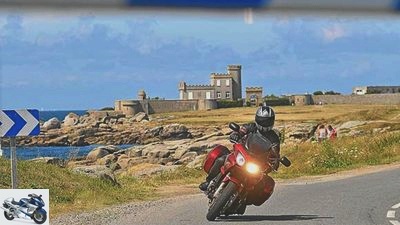 On the go: Brittany

On the go: Brittany
Motorcycling on the coast of France

You can certainly also take a nice gondola through the interior of Brittany, but the rugged coastline with its striking capes, lighthouses and harbors is more grandiose – even when you visit all of these Breton icons for the umpteenth time.

They are cheaper than a manta plate in the Ruhr area. Also so fresh. Tasty, healthy – and they should also strengthen your virility. A six-pack of freshly caught oysters costs just 2.80 euros at the Cancale market. Those who like the delicate slimy stuff will not give up after half a dozen and should feel like they are in paradise on the Breton coast. Otherwise you can at least get enough of the turquoise sea, which is free in Cancale and elsewhere.

Hell was the night before our arrival at Mont Saint Michel: 32 degrees, 150 percent humidity, 4000 steps to the pre-booked hotel, which was hidden somewhere like in a termite mound. The end of the line for motorbikes is the large parking lot at the foot of the monastery mountain, which juts out from the Uferschlick in the shape of a pyramid and lives less with its guests than with its guests. But at the latest when the flow of day-trippers has ebbed and night owls roam through the maze of alleys striving towards the moon, the holy mountain becomes a positive experience. In the morning a magical moment when the sun flickers like a heavenly welding torch on the roof of the abbey church. For copycat criminals: It was only 63 steps before the luggage in the Auberge Saint Pierre was allowed to slip off wet shoulders.

On the go: Brittany
Motorcycling on the coast of France

The wind blows us from the sacred Mont Saint Michel into a midsummer day like a big blow dryer. If it takes a little sweat somewhere else to work out an optimal route, in Brittany the rugged coast determines where to go. A 2730 kilometer long demarcation line between the elements, peppered with spectacular views of the water, which repositions itself with every wave of the waves; In addition, there are a lot of immovable stone on land, sometimes formed by humans, sometimes by nature, and belongs to Brittany like the crispy crust of a baguette.

We let our motorbikes off the leash, but are constantly slowed down by attractions. “Pirates to starboard” was the old saying in the Saint-Malo catchment area. Today the old pirates’ nest with its huge wall is anything but a reason to flee. Even if it’s just to replenish the most necessary supplies: new chain spray and fat popsicles.

Two hours later we are at Cap Frehel, one of the many exposed points in Brittany, which, as soon as you have seen them on the map, are already “booked”. The coast drops 70 meters deep into the emerald green sea, and two lighthouses rise up close to each other from a thick carpet of heather and moor. To top it all off, the Cap bird sanctuary is an enraptured sight of the day trippers and guillemots. Sometimes also on German motorcycle license plates: “I still knew your grandfather; I was five years old when they came to us. ”At least for this old French lady, the war is still a trauma. 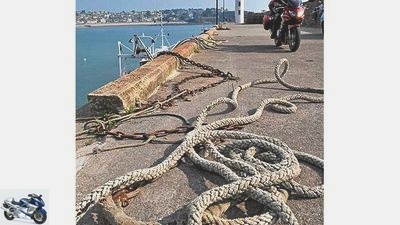 Postcard motifs: Port of Erquy, where a lighthouse watches over the fact that the dry-out boats swim free again.

The rest of the day in quick succession: first an inviting ensemble of golden-yellow sandy beach and fragrant pine trees, which the seaside resort of Sables-d’Or-les-Pins does not owe its name to by chance. Then the postcard motif at the port of Erquy, where a tiny lighthouse like a lifeguard on the edge of the pool watches that the boats that have fallen dry swam free again when the tide comes in. And finally, in the race against dark clouds to Tregastel, where the tires crunch in the gravel in front of the Park Hôtel Bellevue.

Time for an interim conclusion, especially when the author is in Brittany for the fourth time since 1985. What has changed – apart from yourself, of course -? Least of all landscapes and places that will probably still be “typically Breton” in 100 years’ time. The motorcycle is clearer, because in contrast to the whispering CBF 1000, a robust VF 1000 F2 was the protagonist the first time. And while at that time the journey was literally in the dark, but the search for a room in the evening cost a lot of time and nerves, the quarters are now conveniently pre-booked, but they are also forced into a temporal corset.

Even those who do not speak French will have an inkling of what the Côte de Granit Rose has to offer. The pale pink shimmering granite chunks on the coast between Perros-Guirec and Trebeurden look as if they were modeled and piled up by giants during the geological childhood days and have such descriptive names as turtle or Napoleon’s hat. A climbing trip through the bizarre rocky world on the beach of Tregastel, which was still slippery from the last flood, is even really fun thanks to the grippy soles of the motorcycle boots.

A great combination of coast and panoramic road, not as common in Brittany as in Norway’s fjords, can be found at Tremazan. To the right of the throttle, the Roches d’Argenton, recognizable in the glistening silvery light of the sun reflected by the sea, fly past, and under the front wheel the structure of the asphalt blurs into a pattern, as if the Honda were arcing through a swarm of sardines.

In Camaret, a formerly important lobster port, the tourist value of old fishing trawlers has been recognized and a picturesque ship graveyard has been created. Instead of disposing of all the discarded barges with the Caterpillar, a few selected wrecks such as industrial monuments between Duisburg and Dortmund are now experiencing their second, rust-blooming spring. But even those who do not tend towards maritime necropsy will like the charming place: a brightly decorated row of houses and restaurants on the harbor promenade, the defiant Vauban fortress tower and the Notre-Dame-de-Rocamadour chapel with its sailing ship models under the ceiling of the nave. In addition, with a bit of luck, early in the morning at six in the sky an explosion of colors like in a cylinder head at 10,000 tours – Camaret ranks pretty high in the Brittany league.

Manni Mus-termann should avoid Brest on his motorcycle. Instead of the modern port city, where the submarines of the grandfather generation once lay in the bunker, the agenda is more romantic and rough places like the Pointe de Penhir and Pointe du Raz. It is the Finistère, the “end of the world”.

The ocean breaks on the rock with a drooling spray, driving new regiments of white cavalry against the Breton bastions. The Pointe de la -Torche, where the world’s elite surfers dance rock ’n’ roll on the waves, is popular.

It is well known that lighthouses were invented so that as little as possible is harmed on dangerous coasts. A splendid example of this species is the Phare d’Eckmuhl: 65 meters high, 285 spiral staircases, a flash of light every five seconds with a range of 24 nautical miles. Further details can be obtained from the tour guide Heike Weigl when climbing the tower; Appropriately enough, it comes from Eggmuhl in Bavaria, which was named after the lighthouse via the “Napoleon detour”. Speaking of Bavaria: Like the Free State, Brittany also values ​​a certain degree of autonomy. So one cultivates its own language, which is hardly understandable in the rest of the country, and on the war memorials omnipresent in France the soldiers died here not for the fatherland, but for their homeland.

Concarneau is an ideal spot for the evening. The old town, the Ville Close, lies like an oyster pearl in the harbor basin, which can only be reached via a stone bridge. No entry for unromantic souls. Later a street festival rages here that the anchor chains only wobble: Chapeau Concarneau.

Even on the following day it is not possible to empty the motorcycle tanks non-stop, because Brittany keeps screaming stop! At Doëlan, on a tipsy lane staggering through orchards behind thick hydrangea balls, the Cidrerie des Vergers de Pen Ar Ster with excellent cider, then the Quiberon peninsula, which attracts with 2000 hours of sunshine per year. The narrow headland protrudes far into the Atlantic and does not allow bathing on its wild west side, the Cote Sauvage. On the east side, sheltered from the wind, in a large, sandy bay, it pretends not to be able to cloud any water. Another attraction is Carnac: around 3,000 dolmens and menhirs are more or less neatly lined up in the botany. What looks like Obelix’s Hinkelstein collection still puzzles science today. There is no question, however, that Auray with its cozy harbor district on the banks of the Loch is ideal for the last evening in Brittany, before the roar of the motorway reigns instead of seagulls and the sea. 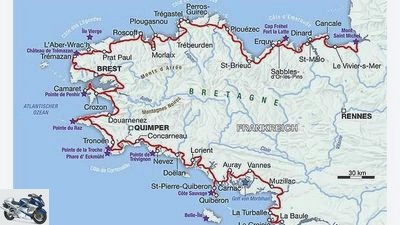 getting there:
The quickest way to get to Mont Saint Michel, the starting point of the tour described, is via the (toll) motorway. From Cologne, for example, it is about 790 kilometers to the holy mountain via Amiens, Le Havre and Caen. It’s around 940 kilometers back from La Baule via Nantes, Paris and Brussels to the cathedral on the Rhine.

Worth seeing:
It is not that motorcycling is not nice in Brittany, but unique places force you to stop again and again: 1. Mont Saint Michel: The Klosterberg can be experienced most intensely when staying overnight. 2. Saint-Malo: Here a stroll on the medieval city wall is worthwhile. 3. Côte de Granit Rose: Crazy rock formations invite you to adventurous climbing. 4. Camaret-sur-Mer: tranquil fishing village with an eerily beautiful ship cemetery. 5. Pointe du Raz: This is where the world ends, the troubled sea breaks like at the bow of the Titanic. 6. Phare d‘Eckmuhl: Lighthouse like a picture book, the spiral staircase leads visitors up, the affiliated museum delves deeper into the subject. 7. Concarneau: single-mindedly head for the old town resting in the harbor basin and visit the fish market early in the morning. 8. Quiberon: a peninsula with two faces, for cliff gazers the wild Côte Sauvage in the west, for sun worshipers the sheltered bathing bay in the east. 9. Carnac: 3000 menhirs. 10. Auray: a dreamy harbor town a bit away from the coast and an example of the fact that detours inland are also worthwhile.

Travel time:
The months before and after the French holiday season in July and August. The weather is also considered changeable in summer, which increases the drama.