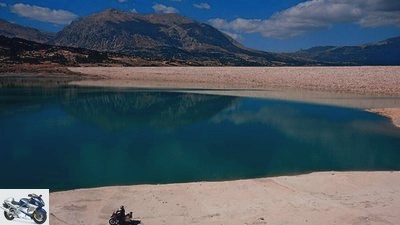 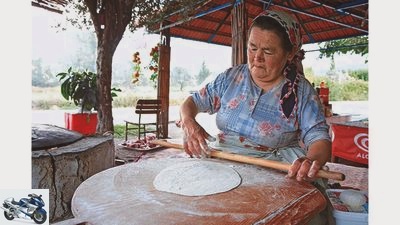 1/23
When the little hunger comes: Gozleme fills the stomach magnificently. 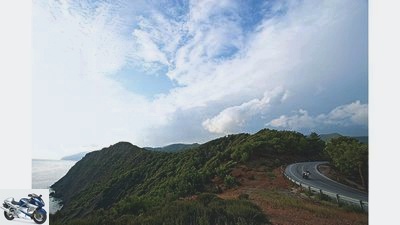 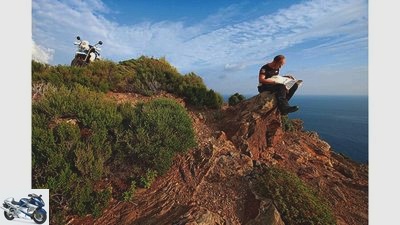 3/23
Positioning on the way to Anamur. 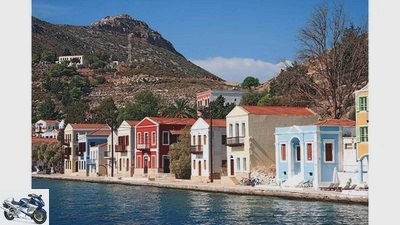 4/23
Only three kilometers from the Turkish coast: the houses on the Greek island of Kastellorizo. 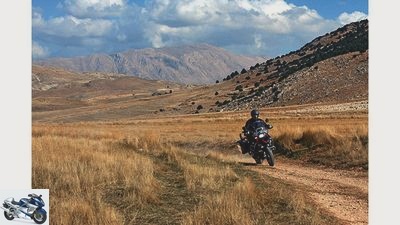 5/23
Easy Offroad in the Lycian highlands. 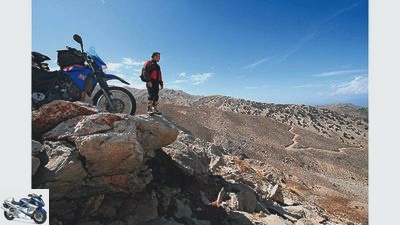 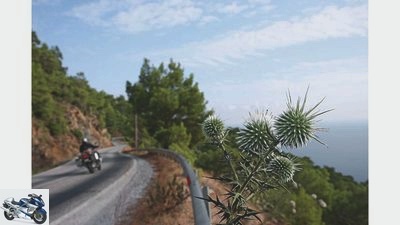 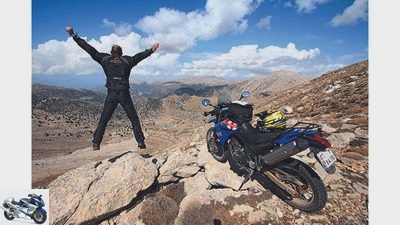 8/23
Above and completely lifted: the top of the pass to Catak. 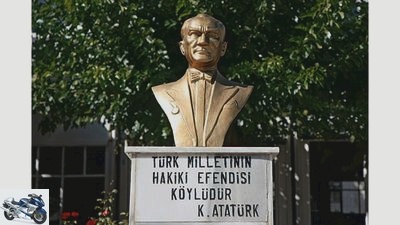 9/23
No place can do without Ataturk, the founder of the state. 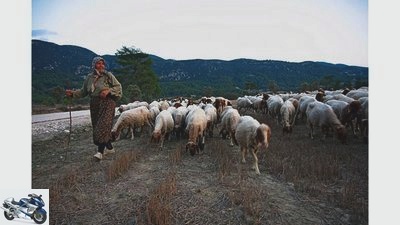 10/23
The coast lives from tourists, the hinterland from flocks of sheep. 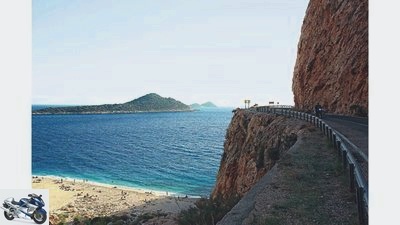 11/23
Always along the wall: the coastal road to Kas has it all. 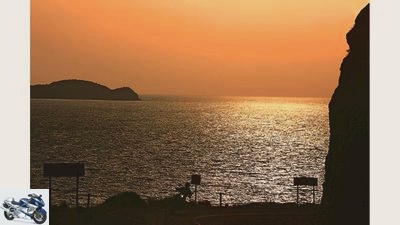 12/23
D 400, the really big number among the coastal roads in the evening light. 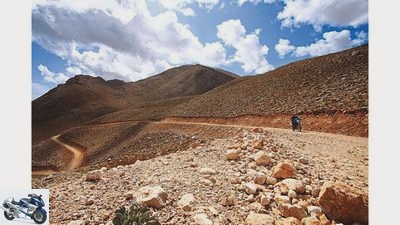 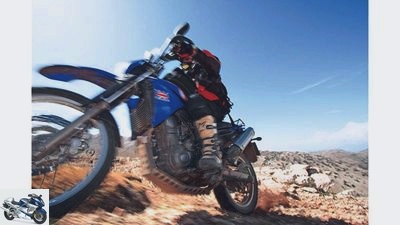 14/23
That tiles: over all the mountains back to the coast. 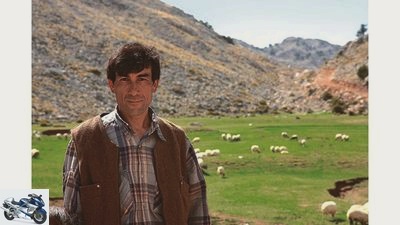 15/23
In summer nomads keep their sheep on the barren pastures of Lycia. 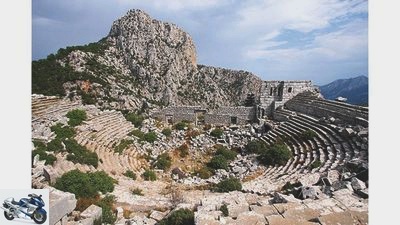 16/23
Undiscovered by tourism: the ruins of the Termessos Theater. 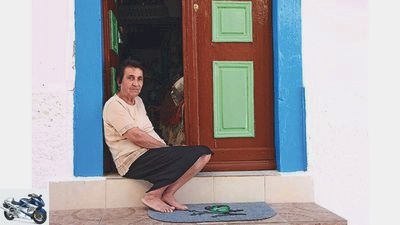 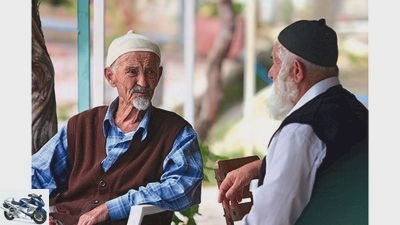 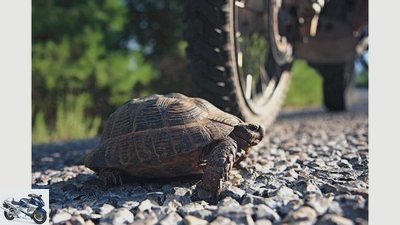 19/23
Even turtles know about the speed limit for motorbikes. 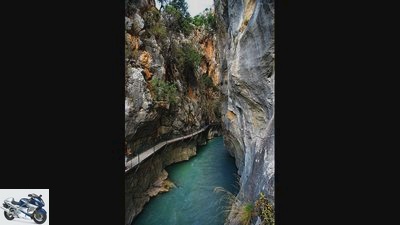 20/23
Helmet off: The Saklikent Canyon is only accessible on foot. 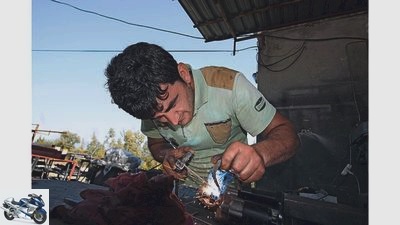 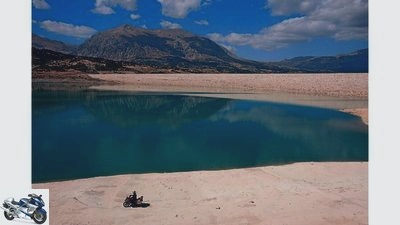 22/23
Fate brought the author to western Turkey. But not only the coast is worth seeing. The hinterland is also worth making a detour there. Here the Caybogazi reservoir north of Kas. 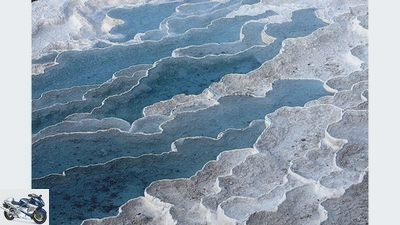 23/23
Discovered by tourism: the limestone terraces of Pamukkale.

On the way: Enduro tour along the Turkish west coast

He wanted to go to Istanbul. But fate decided differently and forced our author on a journey through western Turkey, which presented him with new opportunities and risks. Why Istanbul when the density of experiences is already so high here?

The mountains ahead look like an impenetrable wall. And yet the only road that connects Marmaris with the hinterland leads up there. Half an hour ago Thierry and I landed on the lazy ferry from Rhodes on the Turkish Aegean coast. It is still early. Occasional groups of British bathers navigate the promenade in search of an English breakfast. Marmaris is completely geared towards tourists and sees its guests take over the city half-naked. A sight that makes Thierry stop right at the exit from the town and the mountains. Or is our brunch date already driving him? It is waiting for us a good 200 kilometers east in Kas.

Wavy curves and rough surface, the warm smell of pine trees in the nose and the corners of the mouth wide in the cheek pads: finally back in Turkey! I was last here in 2008, came from Syria and wanted to go home via Istanbul. Unfortunately, fate ruined this plan, I had to take a ferry from Anamur, the southern cape of Turkey, directly to Greece before I could reach the old city on the Bosporus. Now my second chance for Istanbul has come. Together with Thierry from France I want to drive to the starting point in Anamur to catch up on what I missed at the time. We are well prepared and expect a lot. There is only one thing we do not expect: fate.

For the time being, however, our eyes are drawn to a landscape in front of the ramp that is rare: the Gulf of Gokova. Like the claws of a brilliant crab, two headlands encircle the azure blue sea over a length of 100 kilometers. Now a photo, but Thierry looks at the clock: “Think about Dave!” Right, our second breakfast. Thierry met Dave a few weeks ago through a motorcycle tour platform, and we were promptly invited.

At Kalkan, the D 400 is in close contact with the sea. It nestles closer and closer to the shore and therefore has to go along every bend in the coastline as far as Kas. Now we let our BMWs massage the tar blanket as much as possible. The track’s grip is so perfect that the front hand of my HP2 repeatedly stretches briefly towards the blue of the sky at the exit of the curve. And then the road bends in another direction again. What a route! Even the small hunger that slowly works its way out of the depths of the food duct is not noticeable at first.

Dave had shown us the way from Kas through the mountains to his house. And that’s right: the massive stone house stands in a wide high valley not far from a small intersection. As we approach the gate, six dogs jump towards us. Dave waves to us from the doorway to just drive in. Behind him, with shoulder-length red hair, that must be his wife Juliet. The loose gravel on the driveway splatters under the tires, and the four-legged gang romps around us. Four-legged? Even after looking twice, one of the dogs only has three legs. Dave laughs: “Juliet took him in. It takes in all stray dogs.” “I should have had him euthanized?”, countered Juliet. “You don’t put a person to sleep just because he’s missing a leg. And now come in!”

With the first step into the house, we leave Turkey and travel to Great Britain. Furniture from the island, photos from the Army Corps. “My father was in the army, and I ended up going too. As an ammunition defuser. I worked in England for a long time and then in Germany.” Dave switches to partial German: “In Monkengladbak. I learned to ride a motorcycle there. Fantastic! Now, I have an XT and a TT 600. Good bikes for Turkey.”

With a full English breakfast in our stomach, Thierry and I take one of the hottest routes on the edge of our plate on the Turkish Riviera. It’s still called D 400, soon plunges into shady forests, and the spicy smell of leaves and wood flows through the angled visor. Then she steps out into the open again and swarms 200 meters above sea level. Incessantly, there are small banked curves lined up one behind the other, which let the sloping toes feel into the void. The 80-kilometer spectacle only comes to an end when Anamur Castle peers over the horizon in the soft evening light at the end of an eternally long beach. This very beach is our starting point for the way to Istanbul. 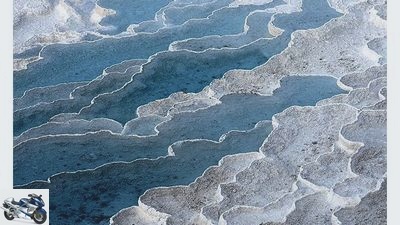 Discovered by tourism: the limestone terraces of Pamukkale.

Hidden under the grains of sand of Anamur lies dormant life thousands of times over. A few months ago, flocks of caretta caretta turtles buried their eggs here. The cubs hatch with the next full moon. Very few of them will survive, because birds, crabs and fish are already waiting. Unfortunately we cannot wait for the hatching this year. About 1000 kilometers separate us from Istanbul, and from Antalya we will still get to see enough fantastic things. The incredible sintered terraces of Pammukkale, for example. Or the strait of the Dardanelles. So, it’s time to saddle up! But then comes this irritating moment that everyone knows.

Thierry’s boxer is already mumbling when I press the start button. An unusual noise accompanies the starter’s work. It sounds like its energies are wasted, but eventually the engine starts. So it was just a passing cough that comes and goes again.

With wide serpentines, the road towards Denizli leaves the abundant sea of ​​houses of Antalya and its lucrative beaches behind. At an inconspicuous junction with the note “Termessos” let’s turn off the main route. Imagine a mountain top in which a crater was built afterwards. This is exactly what the Termessos amphitheater looks like. Except that this crater has rows of stone seats. And if you sit in the upper rows, you can see the Turkish Riviera 1000 meters below. Even without an actor, a top-class drama!

As soon as we get back to the bikes, Anamur’s little cough is noticeable again. This time longer. The starter whines weakly, and in the end the boxer just wants to be started by rolling. Should we go to Istanbul like this? Thierry shakes his head. “If we don’t have a gradient, you won’t get 100 meters with this thing.” What should we do? Thierry has an idea. 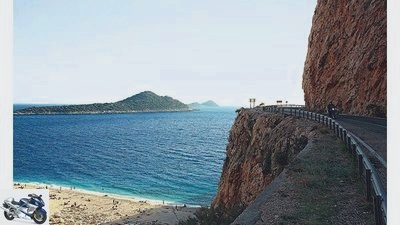 Always along the wall: the coastal road to Kas has it all.

It is already late afternoon when we run back to Dave, Juliet and the pack of dogs. Thierry’s thought that Dave could help the lame starter on the jumps hits the mark. “No problem, we can do that again!” Dave is in his element. “This will be the starter clutch.

There’s a welder in town who can fix it.” A little later, the helpful man welds himself in a rage. In flying sparks, the freewheel is initially healed again. But before anyone can prevent him from doing so, the eager helper welds the freewheel force-fittingly to the housing. At that very moment, Istanbul, which seemed so close this morning, moved to another planet. Dave gives me courage. “Until the spare part arrives here, you take my XT and we explore Lycia, my hinterland. Tomorrow it will start!”

The high valley in which Dave’s house is located quickly remains below us. Countless curves take us higher and higher until a new, even higher valley opens up in front of us. The Caybogazi Reservoir is emblazoned in jade color in the middle. Thierry grins: “Why do you actually want to go to Istanbul?” Dave tries to drown out the shooting of the TT: “If you already like that, it will be even better in a minute!” Says it, kick it in first gear and turn onto a wide dirt road. It screwed up to the next level of the Lycian highlands. Again and again we pass flocks of sheep accompanied by armed shepherds. “Because of the wolves”, Dave calls out to us.

When we drive over the next hilltop, I can’t really see through the dust plumes of the TT and GS. But when the haze subsides, a gigantic mirror spreads in the valley. In absolute calm, the Girdevsee perfectly reflects the surrounding two and a half thousand meter peaks. Dave exults: “What do you think??” Thierry takes the words out of my mouth: “Istanbul can wait.”

What we don’t know yet: Express shipping of the spare part will still take over a week. Istanbul has to wait on, fate has tricked us. 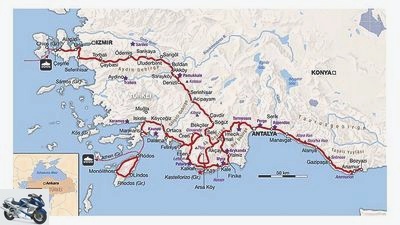 Whether with or without a visit to Istanbul: A trip along the coast and through the hinterland of western Turkey is a driving and emotional experience.

Getting there:
From Stuttgart to Izmir you have to estimate about 2500 kilometers. The route leads through Austria, Hungary, Serbia or Romania and Bulgaria. Those who shy away from this distance on their own can use the Autozug (www.optimatours.de) to Edirne / TR from Villach in Austria. A single journey starts at 240 euros. Alternative abbreviations are the car trains to Verona (www.autozug.de) and the Ancona / I-Cesme / TR ferry from www.marmaralines.com from 230 euros for one person with a motorcycle.

Travel time:
Spring and autumn are the ideal travel times for the western Turkish coastal regions. In summer it can get very hot on the coast, but in the mountains of the hinterland you can expect temperatures a few degrees lower.

Stay:
The Turkish west and south coast is geared towards tourists. Hotels are as frequent as the waves in the sea, especially in the area between Bodrum and Marmaris and between Antalya and Alanya. With the large range on offer, price comparisons and negotiations are worthwhile. Recommendations are the hotel www.nisanyan.com in Sirince near Efesus / Efes and the camping site www.anamurdragonmotel.com by Pervin Kilic on the beach of Anamur right next to the mighty castle.

The distance:
Turkey offers every imaginable road quality. Motorways (toll) and country roads are often in good to very good condition. On small branch lines, things can get rough. Friends of stony and dusty slopes will quickly find what they are looking for. Often longer distances can be covered without asphalt. If you have the leisure to drive around the coastal strip between Antalya and Alanya through the hinterland, you are doing yourself a favor. The entire route leads along the Neckermann castles and is tormented by a lot of traffic. There is a speed limit of 70 km / h for motorbikes on Turkish roads, which is monitored with mobile radar on the major overland routes. The penalties are severe.