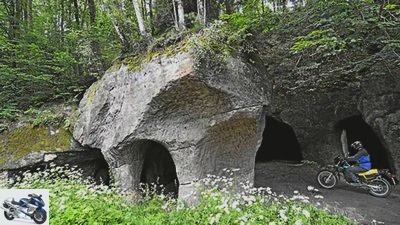 On the way: the border triangle near Zittau

On the way: the border triangle near Zittau
On the border between Poland and the Czech Republic

Where Germany borders on Poland and the Czech Republic, there is a lot of pristine nature, and adventurous enduro riders can go deep underground.

The three XT boys really know their way around the Wild East. Olli, Jorg and David prefer to ride with theirs Yamaha XT 350 cross-country through the German-Czech-Polish border region. Between the stubble hops, I almost feel like Gulliver with my Suzuki DL 650 V-Strom, at least on trips to the botany, where the former king of the Alps literally struggles. Not bad, because the tri-border region is not boring on the road either. And when the motorcycles are swapped, the XT boys, who are used to their 27 little horses, are amazed at how things are going on the V-Strom.

Zittau’s market square shines in the most beautiful pastel shades. After the fall of the Wall, the small town in the remote south-east corner of the republic made the headlines primarily with its alarmingly high unemployment figures. Today, thanks to the investment in restoration measures, a pretty town hall in the style of the Italian Renaissance flatters the eye of the visitor. This can enjoy not only stone but also old steel splendor: the steam-powered narrow-gauge railway from Zittau to Oybin is always worth a stop for railway fans. A cone-shaped sandstone mountain rises high above the local train station, the Oybin, crowned by a castle ruin and a panorama restaurant; it is one of the most prominent elevations in the Zittau Mountains, which are not exactly poor in rock formations. “You could let off steam with the Enduro on the lump – if you could”, explains Olli with obvious regret.

On the way: the border triangle near Zittau
On the border between Poland and the Czech Republic

With official blessing, the Luckendorfer hill climb, organized by the committed MC Robur Zittau, takes place every year at the beginning of August; 300 historical and current vehicles, from the BSA team to the Scania racing truck – none of the 10,000 visitors’ noses are left unseasoned by the smell of oil, rubber and petrol. The smell of roast would not be bad either. In the meantime we have crossed over to the Czech Republic and are heading for Jablonne v Podjestedi through a forest in which the German oak and the Czech linden – the national symbol tree of our neighbors, by the way – maintain their green coexistence.

Pekelne doly (for devil’s pit) is the name of the private biker club that runs a truly unique motorcycle cave between Velenice and Svitava. It looks like a spacious, stone-age underground car park made up of several “Halls” existing system. Under the Nazis it was used as a secret production facility for the V1 and V2 rockets, today it is perhaps the craziest biker meeting place on the whole planet. With the motorcycle you can jet to the underground bar – or, if you wish, even to the night camp, because the Teufelsgrube also offers overnight accommodation. 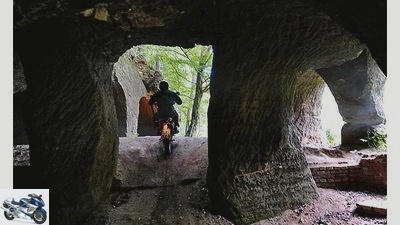 A cave rarely comes alone in the Lusatian Mountains, and so we come across the next just a mile further. Anyone curving around there between the mighty pillars supporting the vaulted ceiling has the feeling of riding a pocket bike slalom around the legs of a herd of elephants. Once you’ve got a taste for it, a little later you can hardly stop Olli. “Now I want to have some real fun”, he hits the bushes with the 350, where the forest path, softened by the last rain, is pretty sloppy and the road-tire V-Strom is extremely messy. The reward for the effort is a narrow tunnel in which the head rests deeply on the tank, even on an XT at walking pace. Really crazy.

Back in civilization. Relaxed, we chug through the country dozing in the evening sun. A surging ocean of cornfields, avenues as if from a world that has long since disappeared elsewhere. It is hard to believe that the tack, tack, tack of machine guns was once at home here, as the bunker line along the border with the Czech Republic bears silent testimony to. Somewhere near Grabstejn, even Olli loses his bearings a little. “I could imagine that we will come out of the Wotansburg”, he comments on the diversion-related zigzag course of the last half an hour.

On the way to Frýdlant it suddenly means: “Take the serpentines down the mountain, I’ll cut through the forest” – and the XT disappears between the trees. A short time later she reappears. The little single cylinders are impossible to break.

The next day we roam the area between Zittau and Gorlitz. The first stop is the baroque Konigshain Palace, then come the half-timbered houses from Obercunnersdorf. Two of the residents are not only a king today, but their entire lives: Rita and Horst Konig sit on the awning-covered bench in front of their half-timbered house and apparently don’t mind a little variety. That’s why they like to buy freshly picked currants from the front yard for foreign enduro riders. The XT-Boys are already making plans to conquer the mountains. 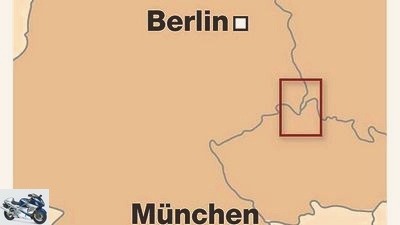 Overview map of the border triangle.

If the remote location was once perceived as a locational disadvantage, this is exactly what the triangle near Zittau can score with today. Especially if you are touring it by enduro.

Getting there:
The fastest way to get to Zittau, located in the eastern corner of Germany, is on the Autobahn 4 to Bautzen, from there on overland on the B 96. For those arriving from the south of the Republic, the route via Prague may be a worthwhile alternative.

Worth seeing:
Since the opening of the borders, especially in the border triangle, there has been a seemingly aimless appeal “let yourself go”, but at least a few milestones can be considered “beacon” not hurt. So: Zittau’s spruced up market square should be seen as well as its Czech counterparts in Jablonne v Podjestedi and Frýdlant. And while Oybin is a magnet for fans of the narrow-gauge railway, fans of the half-timbered houses around Obercunnersdorf can hardly avoid it. Walk in or drive in, it is said in various caves near Velenice. Architecture striving towards the sky can finally be admired in such classic places as the baroque Konigshain Palace and the St. Marienthal monastery, founded in 1234. 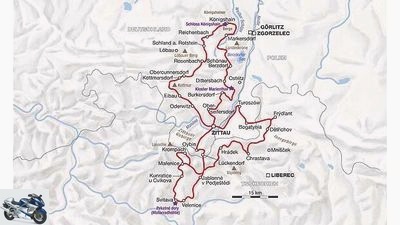 Accommodation:
A central quarter is the cheapest option for day-trip stretches without luggage. Depending on personal preference, this tour can be in Germany, the Czech Republic or Poland. The following accommodations were available for the research: Hotel Schwarzer Bar, Ottokarplatz 12, 02763 Zittau, Telephone 03583/5510, www.hotel-schwarzer-baer.de, single room 44 euros,
Double 56 euros. Pension U Salvatora, Namesti Miru 161, CZ-47125 Jablonne v Podjestedi, phone 00420/487/754333, www.pensionusalvatora.cz, bed and breakfast from around 19 euros (485 CZK). The Pekelne doly motorcycle cave between Velenice and Svitava, phone 00420/487/868683, www.pekeledoly.cz, promises a special experience

Literature / Maps:
The travel guide from Reise Know-How publisher Peter Rump provides comprehensive information “Upper Lusatia, Zittau Mountains” for 14.80 euros. Volumes 01 and 02 are sure to inspire the train driver in the man “Railways in the border triangle, East Saxony (D) / Lower Silesia (PL) / North Bohemia (CZ)” from EK-Verlag for 39.90 euros each. In most cases, the Shell regional map sheet 9 is sufficient as a navigation aid for the tour described “Dresden, East Saxony, Brandenburg” on a scale of 1: 150000 for 7.50 euros.