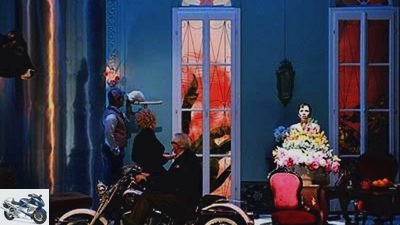 In and of itself, a Harley is a great opera anyway. Because of din, pomp, swank, exclusivity and all that pipapo. If such a machine is still in person on the music theater stage, then there could be trouble.

With such a rich mixture.

The good news first: hand in your mink coat at the cloakroom at the Zurich Opera House on Bellevue
Doesn’t cost a penny: a sensation in this outrageously expensive city, where a “Einsli” red wine costs eight francs
Book beats. “It’s included,” croaks the cloakroom, how nice.
Opera is like a bio sauna. You sit in the warm, cannot be reached by phone and look forward to a delicious bratwurst afterwards. If the Singspiel is called »Harley«, it is not just the motorcycle enthusiast Zurich banker who is hot. In Zurich, whose opera house is known not to play in the district class, local critics also hailed the piece as “sparklingly funny”.
But even the vague hope that cowl wearers will finally trudge through the halls of high culture is not fulfilled. Glitter sweaters from Vogele mix with the usual evening wear, that is
roughly the Karstadt of Switzerland. is
“Harley” in one after the premiere
Migros popular performance landed, and Migros is not only a food wholesaler who, on an educational principle, does not sell alcohol or cigarettes, but also something like a general education institution. The offer even includes courses “Schwyzerduutsch for beginners”, where the foreigner is taught the difference between “dinne” and “dusse” (inside and outside). Incidentally, a “Cupli” in this country is a glass of bubbly, which, when purchased for 15 solid Swiss francs, is definitely recommended as a kickstart in the case of “Harley”.
Because now the bad news: This opera has as much to do with Harley as a Toyota has to do with Grimm’s fairy tales? Motto: Nothing is impossible ??, and the giant screen presented to get in the mood with an artistically alienated photograph of the cult bike from Milwaukee is, to put it politely, a fraudulent label.
What the heck is the artist trying to tell us? His name is Edward Rushton, he is 33, is considered a talent, was allowed to produce the opera as a commissioned work and has “originally invented” the plot. The Neue Zurcher Zeitung wrote that it was “not based on any existing template,” on what ?? real! ?? no one would have come.
The setting for the exquisitely cryptic game is a provincial museum somewhere in South America. The masterpiece is the portrait of the “industrial family in the green salon” with father Gustavo, mother Ester, daughter Lili and son Gustavito ??, and of course the singers on stage. With weird clothes on, they play the typical family courtship of the bourgeoisie: mother pliers, father a disgruntled patriarch, son somehow along with them
Socialization deficits afflicted, and of course all of them together are bland. Especially Lili, the little daughter, wants to fall out of the ordinary, like all teenagers: Get away from the shitty family, and quickly. There, oh gracious fate, approaches a crisp museum attendant, his name is Hector
First grade latino testosterone bolts. It comes as it has to come, Hector pulls out the brush ?? and paints the rebellious puberty, whoosh, out of the picture. And the old man got a Harley instead, which makes him so happy that everything is now
in butter is, chirps, tirili. With 9000 revolutions per minute screw themselves
the women’s voices in the gold-laden stucco ceiling, the men vie with one another
their cubic capacity, which cannot be replaced by anything in the opera either. Unless by more. And all of this in set music
Dialogue of the kind that we have in the bathroom: finally pick up the towel. I can not. I’m brushing my teeth right now.
For two and a half hours, the fun drags on in two endless acts, the disturbing clang from the orchestra pit sounds as if the Hell’s Angels had broken into a music store. Engine failure? Potato in the exhaust? Something is wrong with this motorcycle.
If the emission limit values ​​are exceeded in the parquet ?? the surgically tuned blonde on the left smells like perfume that it knocks you out of the red velvet armchair ?? the viewer plagues himself with anxious questions: Does sitting for a long time get a thrombosis? Do you miss the sparkling joke? Okay, Edward Rushton is British but has lived in for a long time
Zurich, and that one then somehow-
when no longer really knows what humor is seems understandable. That’s how she wears
Family a name that draws itself like
a tapeworm: Escudero de la Torre Perez y de la Santissima Trinidad. Could at least be a satirical sprinkling. And little Gustav, the son, looks like
he eats french fries red and white, a real fat boy, for balls. In addition
if he fiddles around with a toy Harley without motivation, it could have a humorous meaning.
Or is the composer a satanist? You can see him in front of you, tangled hair, carving every note out of his body in long nights with the sole aim of sending snobbish e-culture customers on the Highway to Hell: to steal free time and money from a friend of the opera, then to scare him that he might get tinnitus, that is sublime torture in a class of its own. Especially the wealthy people of Zurich need it like the masochist the whip. Art has to hurt. In the delusion of being seen as backwoods behind their seven mountains, they find everything “casual” that somehow smells of avant-garde.
Museum guard Hector is pulling a snack out of his briefcase on stage. Bites into his bread, but of course not really, otherwise he might get crumbs down his throat, and then something would finally be going on in the booth. So the front man in the parquet drills in the ears. The blonde is steaming. Uaaaaa, the guard has painted, Lili escapes, twitter, her picture prison, papa is happy with his Harley. One last surge of brawl and up to the speed limit, the curtain falls. On the stairs to the opera house, an icy breeze blows from Lake Zurich under your fur coat. That too.

Christiane Binder is an author for the Swiss news magazine FACTS and has lived in Zurich for five years.