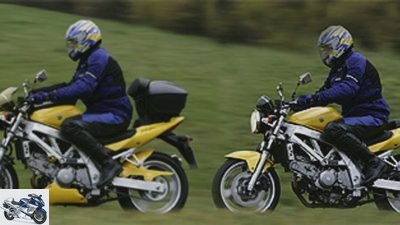 In the beginning she stood there completely naked.

The interested customer did not find that so nice. Whether the dealer of the
SV 650 couldn’t give something to wear, he asked. A front spoiler or a cockpit fairing, for example. Or, for example, a casual pannier
to throw over. No problem, explained the Suzuki salesman, thanks to an extensive original accessories catalog, he could put together an attractive package.
Anyone who wants to get an overview can find them all at www.suzuki.de exclusively from authorized dealers-
add-on parts with which you can upgrade your Suzi.
MOTORRAD wanted to know what the original accessories were good for and took a close look at the most interesting add-on parts for the bestseller SV 650, built in 2004. To anticipate: All parts make a good qualitative impression, delight with accuracy of fit and mostly easy assembly. Minor mistakes are
to forgive, so the resume is: With
Suzuki has no name to lose with these accessories.
That testifies to professional competence
Purchasing from specialized suppliers
such as the tank bag experts at
Company Held or the market-leading tail bag manufacturer Bags Connection. The proven products of the external companies differ not only in their different lettering and logos, but are also tailored to the respective vehicles in cooperation with Suzuki. The Japanese do not even include certain items, such as side carriers and cases for the SV, in their range of accessories. Reason: “They don’t necessarily have a positive effect on the driving dynamics, and since the SV is not supposed to be a classic touring machine, we do without it.”
In general: even if it is convenient to have the manufacturer fully equip you, you should check which parts you actually need. And a price and product comparison with the range of retrofitters is always worthwhile. You already know: it’s the subtle differences that make it.
MOTORRAD is sticking to the topic of original accessories: tests for bestsellers from other manufacturers will follow.

License plate holder: Aesthetes among SV fans are scared at the sight of the growth-
term series holder. The loveless plastic part almost calls out to be thrown out, but there is no alternative in the Suzuki accessories catalog. That’s what polo offers,
Telephone 0211 / 9796-690, with the slim license plate and indicator holder Dragon by M-Design. The powder-coated, pretty aluminum holder with ABE costs 52 euros.

Main stand: Due to the design, it is difficult to equip the current SV 650 with a main stand. Equipped only with a side stand, regular chain maintenance becomes a matter of nerves. While a main stand is missing in the Suzuki range, the retrofit company SW Motech, phone 06425 / 82028-0, provides a remedy. The part costs 129 euros, but is only accessible with motorcycle boots when the side stand is folded out. The machine can then be jacked up with a lot of physical effort using a hand lever attached to the passenger footrest. Important note: The assembly should be carried out by a specialist workshop.

Front fender: The fender (carbon applique, 255.50 euros) gives the Suzuki SV 650 a sportier look and comes with a general operating permit. Annoying: The plastic washers that were actually intended and necessary were not included in the delivery? hopefully an isolated case. When removing the original mudguard, it is advisable to first loosen the two difficult-to-access Phillips-head screws with a hexagonal head and then unscrew them with a screwdriver with a long shaft.

Seat cover: 84.27 euros are appropriate to transform the back of your SV into a sporty pop-butt. The cover replaces the passenger seat, fits the machine like a glove and is installed within a few minutes. Nothing can go wrong with the cultivation, even though it is only described in English or with various Asian characters.

Rear wheel cover: Compared to the matt black, inconspicuous chain guard, the rear wheel cover in the vehicle color really looks good. Whom the
Beautification with ABE is worth 192.24 euros, should access. The assembly, which takes around 20 minutes, is easy and well explained. Important warning in the multilingual
Installation instructions: The replacement part may only be used in conjunction with the original tire size 160/60 ZR 17, because the distance between the tire and the cover is only a few millimeters.

Front spoiler: At a cost of 300.23 euros for a front spoiler, which primarily offers added visual value on the SV 650, you can expect absolute accuracy of fit. The expectation is not disappointed. That
Original add-on part with general operating permit (ABE) in the vehicle color is supplied with a large number of individual parts that are clearly arranged on cardboard under foil. Thanks to understandable instructions in German, assembly takes around 30 minutes without any problems. Tip: Screw on the spoiler brackets loosely at first and only tighten all screws after you have properly aligned the front spoiler.

Cockpit fairing: The installation instructions do not include an understandable drawing or a note that further screws on the lamp holder should be loosened for easier installation. A torque wrench is recommended for the attachment. Without any paneling, the airflow flows through the tank directly to the center of the driver’s body and noticeably pulls him backwards from a speed of 150. The cockpit fairing prevents this unpleasant effect and directs the wind pressure on the chest and helmet. Compared to really efficient protection such as the tried and tested, adjustable touring windshield Vario Screen (162.80 euros with mounting kit) from MRA, telephone 07663 / 9389-0, the cockpit fairing offers few advantages on motorway stretches. In comparison: behind the vario screen (right photo) the driver sits calmly even at 180 km / h and is only disturbed by loud turbulence noises. The 65.95 euros for the chic Suzuki cockpit fairing in yellow, matching the vehicle color, are not asking too much, however.

Lower driver’s seat: one centimeter less, should that bring it? A legitimate question for SV drivers who are struggling with the original seat height of 80 centimeters. Answer: The centimeter is not decisive for a secure stance? The 1.61 meter test driver even found the slightly higher serial padding compared to the retrofit part to be lower in a “blind test”. By both
When she was sitting, she only reached the floor with the tip of her toes. Nevertheless, the accessory seat is a hot tip for smaller SVs due to its much narrower contour in the front area-
Pilots. »I get a better feel for the motorcycle because I sit in it and not on it. The leg angle is more comfortable, and my thighs have better guidance on the tank. The seat gives me more safety when driving, ”praised the test person. A second, 1.87 meter tall tester found the narrower pad ergonomically pleasant. However, the original seat offers more contact surface, which is an advantage for long journeys. The lower driver’s seat costs 74.84 euros, a really fair price.

Tank bag: The magnetic backpack, tailored precisely to the SV by the Held company, does not slip even at top speed. It is secured to the handlebars with a strap and quick release fastener. A glasses compartment is easily accessible. The transparent map compartment, which is a bit too narrow for a standard map, allows a view of the display while driving thanks to a special, integrated mobile phone pocket. The packing volume can be expanded from the specified twelve to 25 liters in a matter of seconds using an all-round zip. The unobstructed view of the speedometer is then blocked. as
In addition to the rear luggage system, the properly manufactured tank bag is highly recommended, even if the base plate is likely to be a bit thicker. At 109.90 euros, the price of the Suzuki backpack including a transparent rain cover is on par with comparable products from the accessory trade.

Topcase: At first glance, this looks massive on the slim naked bike. If you look at it from the point of view “form follows function”, the qualitatively convincing one harmonizes
36-liter case with a carbon-look lid and large reflectors from the supplier Soft Italia, however, works pretty well with the motorcycle. The part, which costs 139 euros, is attached to a special, easy-to-attach adapter plate (81.63 euros) that replaces the pillion seat. The driving dynamics do not suffer from the lockable bike trunk, which offers enough space for an integral plus a jet helmet as well as for other important utensils. Ideal for city drivers and commuters. It was noticeable that the case and adapter plate did not interlock without play? consequently it rattles. The optionally available back cushion does not make much sense because it is hardly possible to reach the backrest with your back and the handlebars with your hands while driving. You can therefore safely save yourself the drill holes in the topcase shell that are necessary for attaching the upholstery, as well as the costs of 29.91 euros incurred when buying the pad.

Universal pannier: The stiff tail bag is new to the SV accessories program and is worth 179.27 euros, because with 60 liters of packing volume, it offers space for all of your camping equipment plus street clothing. Equipped like this, nothing stands in the way of a short vacation. The sturdy bag is lashed to the license plate holder and passenger peg with a sophisticated loop and quick-release system, and a protective film against scratches on paneling is included in the scope of delivery. It is open in two easy steps-
or unsaddled and, thanks to a shoulder strap, can also be comfortably transported away from the motorcycle. Good: A specially cut pack sack serves as a waterproof inner lining. The tail bag remains even at top speed
stable, aero and driving dynamics are hardly affected. The bag spans the pillion seat, so it is only an alternative for single travelers
a complete case system that could also be locked. However, Suzuki offers
no side cases for the SV at all large and well-known manufacturers such as Givi, Telefon
0911/955100, Hepco & Becker, phone 06334 /
9216-0, or Krauser, phone 06334 / 9228-0, those interested will find what they are looking for.

Crash pads: No question about it, the yellow plastic crash pads (46.06 euros) with milled assembly kit (99.92 euros) are eye-catchers. One can argue about the sense or nonsense of this type of protection against fall damage, because in the event of a crash or slide, the frame can be severely damaged at the attachment points of the pad set, namely by means of the leverage transmitted forces. The installation can be done quickly despite the slightly confusing instructions.

Engine protection bar: The powder-coated, black protection bar for 89.90 euros can be attached within the specified installation time of 15 minutes, the instructions including the drawing are understandable for laypeople. Both motor retaining bolts slide easily out of their sockets when they are removed and are secured by the supplied, adapted bolts
replaced. Suzuki prescribes a torque wrench to tighten the nuts (55 and 93 Nm torque). Unpleasant: a bead of weld had to be filed off on a mother before it could be used. Brackets and holes, however, were a perfect fit. The protective bar only spans the side cover of the engine (replacement generator cover: 156.60 euros; clutch housing cover: 183.28 euros). The manifold and radiator remain unprotected.

Tank pad: really recommendable. The pretty part with
“SV” lettering and a stylized two-cylinder protect against large areas
Scratches. The pad made of almost two millimeters thick, elastic plastic for 14.87 euros can be opened without blowing bubbles-
bring. If the position is not perfect, it can be removed and moved several times. A cleaning cloth for pre-treating the tank surface is included.