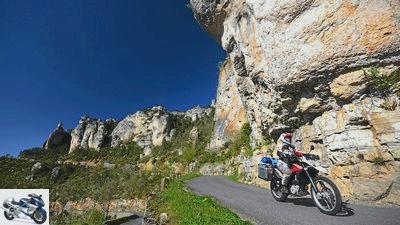 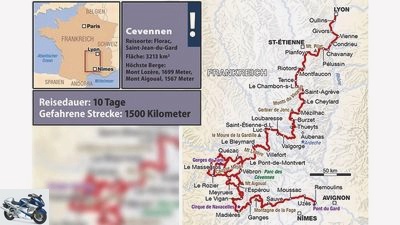 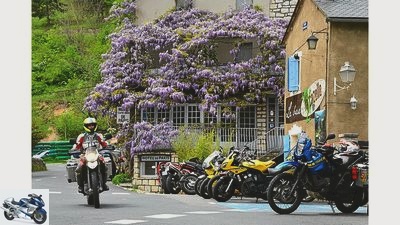 2/17
Meeting point: motorbikes in the small town of Sainte-Enimie on the Tarn. 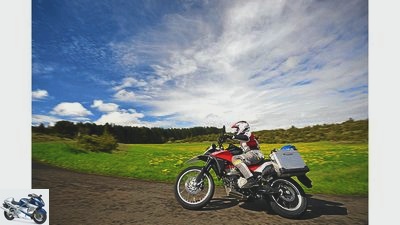 3/17
Fun: narrow paths on the plateau of the Causse Mejean. 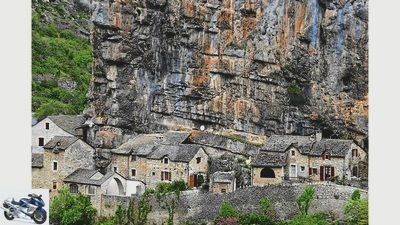 4/17
Courageously built into the rock: houses in the Tarn Gorge. 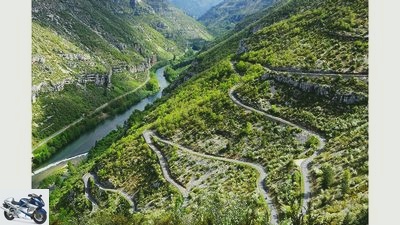 5/17
We drive over passes that we have never heard of, but which we never forget for the rest of our lives. 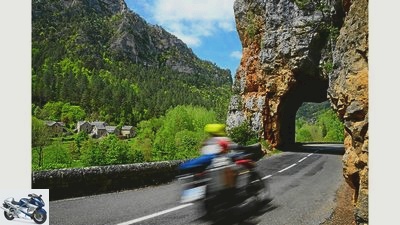 6/17
This scenic and varied road loops through the spring-green Tarns gorge. 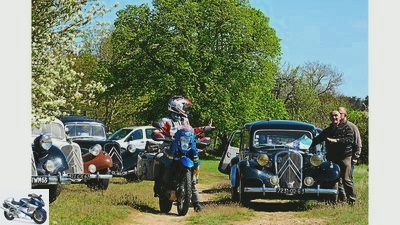 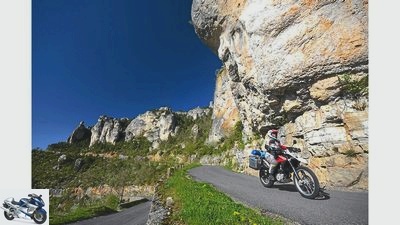 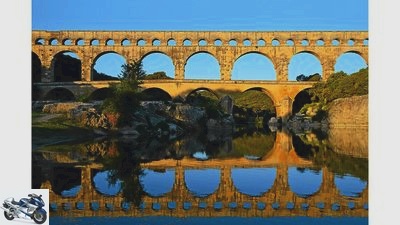 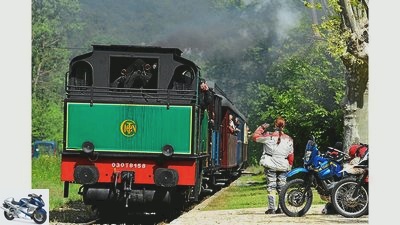 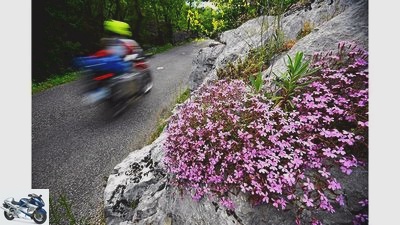 11/17
Drive and be amazed: Experience the Cevennes in early summer. 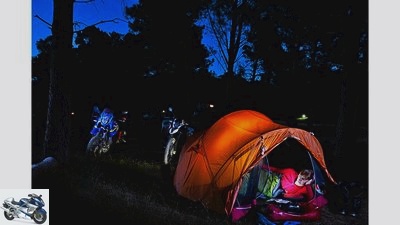 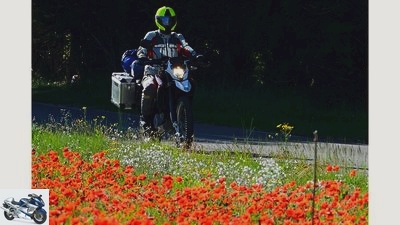 13/17
Are there no more white areas on the map? Yes, in the Cevennes, the hunting ground for single-cylinder. 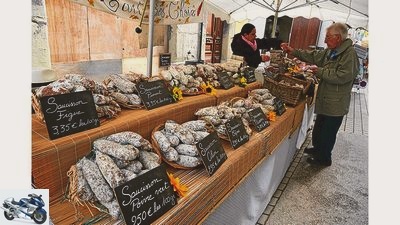 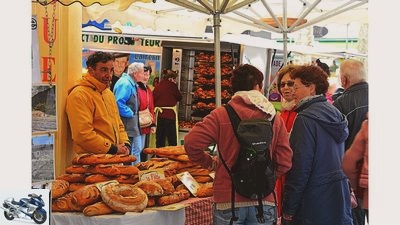 15/17
Better than in the supermarket: what is on offer at the weekly market. 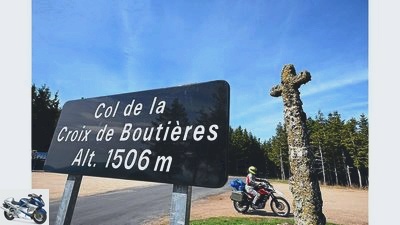 16/17
Discover new passes: the motto of a Cevennes cruise. 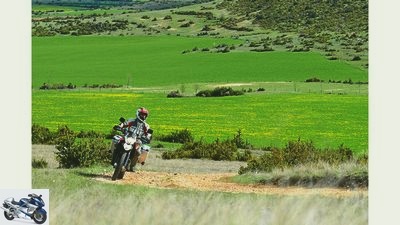 17/17
Enduro paradise: the lonely paths of the Causse Mejean plateau.

Out and about in the Cevennes (southern France)

Well camouflaged, the Tarn flows through its self-cut gorge in the heart of the Cevennes, the most sparsely populated region in France. Lonely plateaus, rugged canyons and daring routes are the perfect area away from the hustle and bustle of the Mediterranean.

White areas on maps exert a magical attraction on people. This was especially true in the days of the explorers. Today there are hardly any such unexplored and unpopulated areas. In any case, nobody would expect them in France, but that’s exactly where they are. The Grands Causses in the Cevennes, barely deserted plateaus beyond the 1000 meter mark, shine white, wide and empty on the Michelin map. Only a few thread-thin paths cross the mysterious areas. This also awakens the spirit of discovery in us.

This goal looks promising and motorcycle-friendly. Before that, however, there are 800 kilometers of motorway that are no fun with single cylinders. With the Tenere’s sheepskin-optimized bench, the pain is kept within limits, but Birgit curses more clearly over the torture beam of the Husqvarna Terra. Then finally the vacation begins, only small and tiny streets. There is hardly anything else in the Cevennes anyway. The perfect single-cylinder area, especially for the agile Terra. The goal is clear, we want to go to the Gorges du Tarn. But how do you get there? The Michelin map is confused with its detailed representation, almost all of the maximally curled roads are ennobled with the green stripe for scenic and driving valuable routes. It can easily happen that you lose sight of your actual destination because of all the detours. So what? That is exactly the freedom of travel. We choose the path to Mont Mezenc, the highest mountain in the Cevennes at 1753 meters.

The bulky Mont Mezenc dominates the horizon from afar. A narrow and bumpy path, garnished with generations of rough patches of tar, nasty gravel and respectable holes, curves uphill through lean meadows. Here and there, not very handsome courtyards hide in the slipstream of gnarled pines. The rough reality up here has nothing to do with savoir-vivre in the south of France, the barren land has to be laboriously cultivated. Almost without exception, the farmers drive more or less museum Land Rovers. English cars in France? Well, the Grande Nation doesn’t produce vehicles that people in this area can use. Fashionable SUVs would be overwhelmed on this demanding terrain. Reliable tools with manageable and robust technology are in demand. Like the Land Rover.

Or our enduro bikes, which feel right at home on these trails. It is not performance that counts here, but agility, plenty of steam from the cellar, long suspension travel and low weight. This is a single area, especially made for the Husqvarna. It’s remarkable how the Italian technicians have pepped up the otherwise rather phlegmatic BMW 650 engine. 59 hp, 180 kilos, short gear ratio, great handling, seasoned with a pinch of super moto, packaged in the garment of a robust enduro that is hardly a way too bad. In short, the perfect device for these roads.


Best of the Alps travel tips

We leave Mount Mezenc behind us, set course south and come over passes that we have never heard of. Col de Bauzon, Col de Meyrand or Col de Finiels, all almost 1500 meters high. There is hardly any traffic here, and yet some sections are papered with so fine tar that the fear nipples on the tires suffer from existential fear. We don’t reach Florac until late in the evening. A lively place that crouches between vertical cliffs on the banks of the Tarn. Florac is the perfect base camp to experience the Tarn and Causses region.

Let’s first follow the narrow gorge westwards. It is Ascension Day and nothing remains of the rest of the last days. Apparently the long weekend attracts all motorcyclists in the country to the Tarn. It’s unbelievable what’s going on here, we can barely get our left hand on the handlebars for all the greetings. In France, almost every motorcyclist says hello, even with a splayed foot. The cafes and parking lots in the small town of Sainte-Enimie are bursting at the seams. And yet you can relax and cruise through the gorge, because the summer camper plague is not here yet.

The Tarn flows crystal clear past overhanging light gray rocks, through rustic medieval villages and light deciduous forests. How did such a small and peaceful river manage to cut such an imposing gorge with 500 meter high walls into the landscape? A timeless job that is far from over. We gondola comfortably in holiday mode to Le Rozier, where the Gorges de la Jonte meet that of the Tarn. It’s not that spectacular, but the D 996 in the basement of the gorge, which has been prepared with fine carpeting, makes up for it with sensational driving pleasure. We had enough landscape for today, now we’re zapping into the next program: just drive, sun in the rear-view mirrors and what feels like 500 bends ahead. All the way to Florac, where our circle closes through the gorges around the Causse Mejean. Causse Mejean, one of those mysterious white spots on the map. Has the cartographer simply forgotten to draw places and streets? Let’s look.

The small road that climbs up the steep 500-meter wall from Florac is tempting just because of the warning on the Michelin map: “Parcours difficile et dangereux.” This may apply to a Gold Wing, but certainly not to our single-cylinder. A dozen tight turns, a shy little wall that is supposed to protect against the abyss, and a considerable incline that demands a lot of pressure from the engine room – nothing more. When we come over the edge at the top, another world awaits us. Gentle knolls roll towards the horizon, covered with sparse, gray-green grass, low bushes and barren fields, every now and then a shelter made of rubble stones for shepherds or sheep. It’s not idyllic, it looks more like the Mongolian or subarctic steppes. Gloomy clouds are chasing east just above our heads, the thermometer shows a pitiful seven degrees.

A rough and hostile country, the complete contrast to the full life in the valley. Hardly 500 people live in an area of ​​350 square kilometers. Iceland is twice as densely populated. And that’s exactly why we are fascinated by the melancholy atmosphere up here. But only until the crumbling D 43 breaks into the Tarn gorge. What a view!

The width of a towel folds down serpentines 500 meters down to the river. A road of alpine quality. Driving once is simply not enough here. Down, turn around, up again and down again. It is precisely these roads that connect the Causse Mejean and the Causse de Sauveterre with the gorge that add the icing to the Cevennes experience. Which is why we just stay another day before we head south.

2000 years ago the Cevennes were almost uninhabited

The Cevennes National Park cannot keep up with the drama of the gorges. An endless pine forest through which the shock-absorbing road makes its way up to Mont Aigoual. The 1567 meter high summit is garnished with old snow fields, the mighty weather station from the 19th century and parking spaces that are empty on this May morning. The mistral has blown the sky free. Thanks to the crystal clear air, the Mediterranean Sea and Mont Ventoux, the white giant of Provence, appear close enough to touch. Nevertheless, our stop is short, it’s freezing cold up here. Nothing like thawing down in the warm valleys.

The enduros swing over almost traffic-free roads, through gorges like the Gorges du Trèvezel or de la Dourbie and over passes that barely reach 500 meters. The landscape is now becoming Mediterranean. White limestones, fragrant Maccia, wild thyme, poppy fields and pastel colored places. Typically southern France. It is almost dark when we reach the Pont du Gard, the aqueduct that the Romans built to transport water out of the mountains. Back then, 2000 years ago, the Cevennes were almost uninhabited, a big blank spot on the map. It is reassuring that this stain has shrunk but still exists. 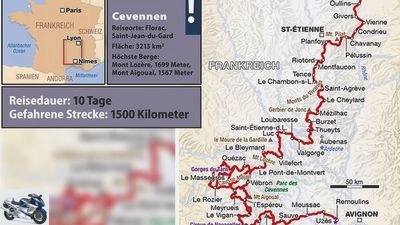 1500 kilometers were covered in ten days.

On the way to the south of France, many drive past the Cevennes. For the Grande Nation motorcyclists, however, the region is at the top of their list. You know, why.

General: The people of the Cevennes have always been a source of resistance: against the Catholic Church, against Napoleon’s dictatorial powers, against the German occupation. Even today you can still feel the spirit of freedom in the towns.

Getting there: The fastest route from southern Germany is via Basel, the most beautiful route through the Swiss Alps. From the Rhineland it goes in the direction of Saarbrucken and via toll highways to Lyon. The DB Autozug was discontinued and, according to Bahn, no longer paid off.

Travel time: From the beginning of May the passes in the Cevennes are usually free of snow, the temperatures are between 15 and 25 degrees. June, September and October are also suitable for traveling. In midsummer it can get over 30 degrees. Nevertheless, the Cevennes are by no means overcrowded in July / August.

Accommodation: Off the peak of the season, finding a room on the spur of the moment is not a problem. From youth hostels to overnight stays in historic castles, everything is possible. There are wonderful campsites along the Tarn Gorge, often in an idyllic location right on the river (www.logis-de-france.fr).

Motorcycling: A network of tiny streets runs through the Cevennes. Expressways and motorways bypass the region. The streets are narrow and winding, the surfaces range from the finest tar to patched paths, where a comfortable and handy two-wheeler with long suspension travel is the best friend. French drivers are remarkably friendly and considerate towards motorcyclists.

Literature: The authors used the “Languedoc-Roussillion” travel guide from Michael Muller Verlag. On 560 pages, it offers an enormous wealth of information for individual travelers. Price 24.90 euros. The book “Auvergne & Cevennes ”from Reise Know How for 19.50 euros. For preparation and reading at home, the “DuMont Picture Atlas of the South of France” is suitable for 8.50 euros.