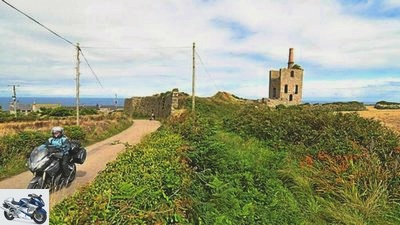 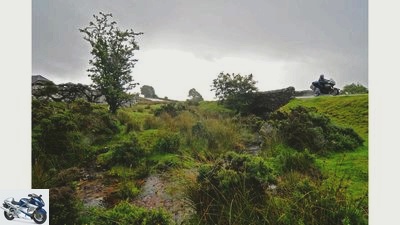 1/11
Out and about in Cornwall – like out of a picture book: The green of the landscape glows even when it rains. 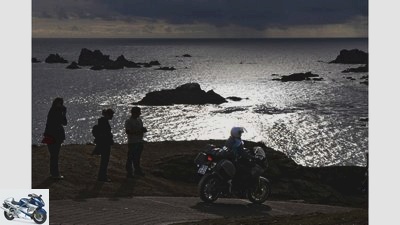 2/11
The view of the sea in front of Lizard Point gives an idea that boatmen are required to master navigational masterpieces here. Bikers have it easier there. 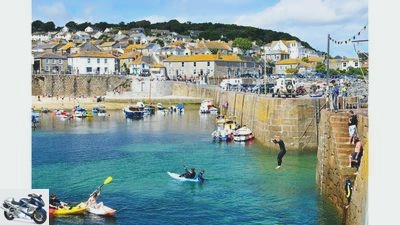 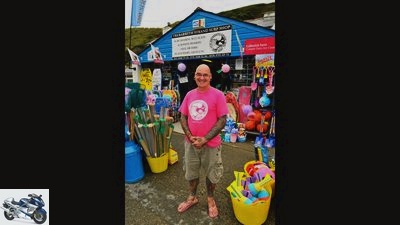 4/11
Life artist and biker Shaun Boundy in front of his surf shop in Trebarwith Strand. 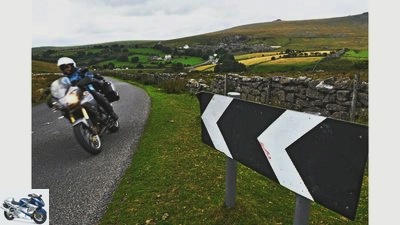 5/11
Curving fun on the quarry stone wall near St. Ives. The coasts show how hard the sea works the land. 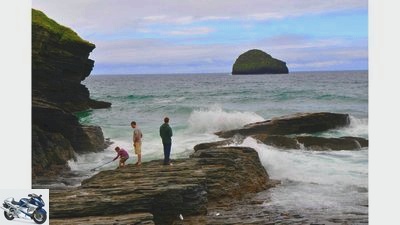 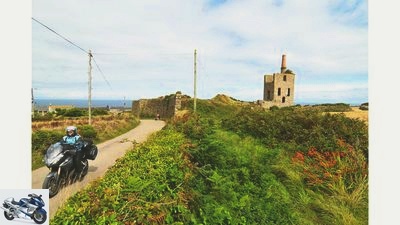 7/11
Nature takes everything back: At St. Just, the remains of the copper and tin mining are evidence of a hard working life. 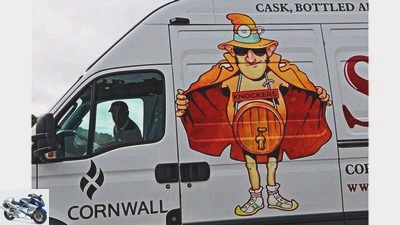 8/11
In Corwall, too, people are fond of spirited drinks. 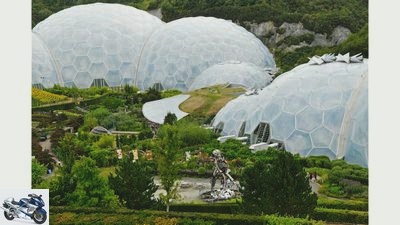 9/11
In the Eden Project near St. Austell, an exotic flora thrives under domes. 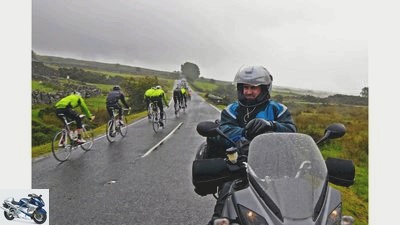 10/11
Two-wheel fans among themselves. 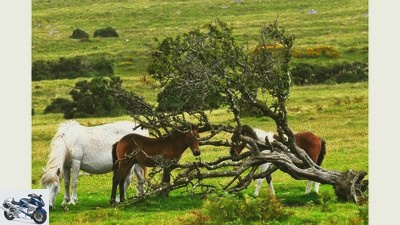 Out and about on a motorcycle in Cornwall

Motorcycle tour: out and about in Cornwall
By motorcycle in the extreme southwest of the British Isles

The picture went around the world. And Boscastle almost under. Back then on August 16, 2004, when during a violent storm over the Cornish coast the river level rose by two meters within a very short time and then suddenly a four-meter high tidal wave shot through the nest of 800 souls by a narrow fjord, 50 Cars and six buildings tore into the storm-lashed Atlantic, driving residents onto the roofs of their homes. In a spectacular air rescue operation, Royal Air Force helicopters rescued 150 people by winch, including the hotel owner Margaret Templar. A large newspaper photo of her dramatic rescue hangs in Margaret’s meanwhile renovated hotel “The Riverside”. This is exactly where our tour of Cornwall begins.

Today the tide reaches its peak around 11 p.m., but only lets the boats that have fallen dry in the harbor of Boscastle dance gently on the waves. And unlike the disaster of 2004, in which, by the way, miraculously there were no fatalities, the water on the first floor of the Riverside is now not a meter high, but a mix of tasty Tetley’s bitter and fresh mackerel in our stomachs.

Motorcycle tour: out and about in Cornwall
By motorcycle in the extreme southwest of the British Isles

As the morning tide, the English breakfast a few hours later. Brightly colored, in stark contrast to the gray sky over Boscastle. Has anyone been animated by the paintwork of the Triumph Tiger? Actually the right weather for a visit to the local Witchcraft Museum. Or for excursions on the subject of “King Arthur”. The legendary founder of the Round Table is omnipresent in the area. But does his noble Excalibur sword really have to be offered for sale as an imitation plastic at souvenir stalls? They’d rather make surfboards out of the universal material.

As if we were walking through the mists of Avalon, we carefully navigate through the soup of the finest water molecules on a narrow lane to Trebarwith Strand. And there run into Shaun Boundy’s tattooed arms. The 51-year-old bon vivant owns 17 motorcycles as well as a surf shop.

No wonder that the local area is not exactly a wind-free zone. Take a look at www.trebarwithsurfshop.co.uk. If the people of Cornwall used to work in places like Delabole in particular in the slate industry, today it is tourism. Impressive example of change: Padstow. The town with its medieval streets and the historic fishing port is so popular that motorcyclists can easily boil the cooling water when stopping and going through the crowded town center; TV star and master chef Rick Stein, who has built up a seafood empire here, could probably even prepare lobster in the hot broth. Those who prefer to enjoy sea creatures in their natural surroundings should visit the Blue Reef Aquarium in Newquay, which has a transparent viewing tunnel. However, Cornwall’s largest seaside resort does not suffer from a lack of visitors thanks to the huge sandy beaches and ideal surfing conditions at Fistral Beach. 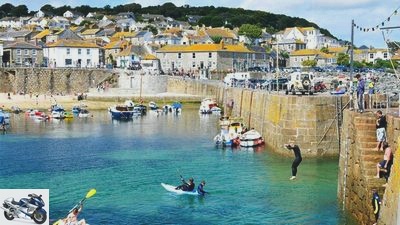 No more sneaking then on the coastal road between Portreath and Hayle. As if Merlin had let his magical powers rule, the landscape is suddenly swept clear of all rolling obstacles. Sure ship also in the sky, where a tearing network of white clouds hangs like a worn flokati. So full speed ahead instead of getting tangled up in the next urban thicket – even if it’s the artist colony of St. Ives with its famous Tate Gallery, sorry. The B 3301 and 3306, as some of the few streets on the map decorated with green beauty lines, sometimes lead in wide arches through ferny hills, are garnished with walls made of uncut stone, fat hydrangea bushes and a sun that shines orange on the sea during an evening bath Shower of water color.

When it comes to dumping, there is no better place than St. Just. The old mining town is said to have the highest bar-per-capita ratio in the UK. A brisk walk from the center is Cape Cornwall, where attacks of romance can weaken even sober souls. “If you want to see Cornwall as it is – or as you imagine it – then you have to hike along the coastal path,” enthuses the couple at the next table over breakfast and strengthens themselves for the next stage of their three-day march from St. Ives to Lands End . And if you want to get an idea of ​​what people used to do here, take a detour to the Levant Mine, north of St. Just. The mining of copper and tin was particularly booming in Cornwall during the 19th century.

Land’s End, the westernmost tip of England, is populated by large numbers of homo touristicus. Quite different is the cute Mousehole, a palm tree-lined gem with a sandy beach-lined harbor basin, quay wall jumpers and crab catchers. Last, but not least, carrot cake and cream tea in Cafe Tremayne, which also rents rooms if you want to get stranded in Mousehole. Many sailors have found their final resting place at Lizard Point, the southernmost point of the British Isles. There is a mighty beacon there at the entrance to the English Channel, but that doesn’t always help, as a large ship graveyard testifies. In keeping with the morbid environment, the doomsday mood in the firmament, where a few rays of light cast silvery, glittering spots from gloomy clouds onto the treacherous, rock-littered sea.

Careful navigation is required on the way to St. Maves. The route is initially a confusing labyrinth of narrow tree and hedge tunnels. The signposted ferry at Helford then turns out to be a bit undersized for our motor-driven “bikes”, the King Harry Ferry at Trelissick is only suitable for shortcuts later. As much as we liked to drop anchor in the fortress town of St. Maves with its subtropical vegetation and the cozy harbor promenade: The berths have already been ordered for today in St. Austell. 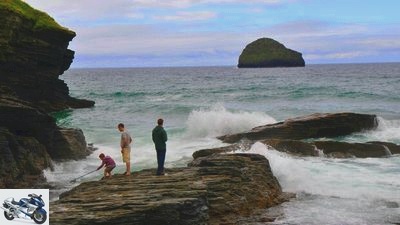 Even James Bond has been to the Eden Project, filmed scenes for “Die Another Day”. The futuristic backdrop of the botanical universe dominated by eight huge, hemispherical greenhouses is really a stunner, the complex is THE visitor magnet in Cornwall. An ideal bad weather program, motorcyclists can even park for free right at the entrance.

Even if it is no longer in Cornwall, but in Devon: Somehow the Dartmoor is simply part of this story. Those who love free-running ponies like to come here. Those who were angry usually stay longer and stay in the notorious Dartmoor Prison. But since people have always wanted to get away just as much, to break out of a world that has become too small or no longer worth living in, they used to fell tons of trees for shipbuilding. And so it looks pretty bare and atmospheric in Dartmoor today. If you want to have a really good time there, move into the “Two Bridges Hotel”. A really cozy lobby with a fireplace and leather armchairs, the sharp screams of a crime dinner from a dining room and the rare opportunity to try Devonian wine, which, if global warming continues, will probably not be bad in ten years. 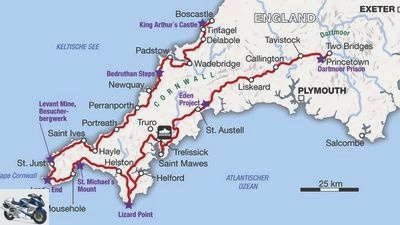 Cornwall, located in the extreme southwest of the British Isles, is probably England’s most popular holiday region thanks to its mild climate shaped by the Gulf Stream and a varied coastline.

getting there:
The fastest way to get to Boscastle, the starting point of the trip described, from Germany is by ferry Calais – Dover (www.poferries.com) and then, south past London, on the M 20, 26, 25 and 3 motorways to the junction of the A 303 behind Basingstoke; from there via Andover follow the A 303 until the A 30 leads to Exeter and Okehampton, then the A 395 and B 3266 to the destination. In England, almost 500 kilometers are covered, plus the distance from home to Calais (about 400 kilometers from Cologne).

Worth seeing:
The largest collection of witch-themed exhibits in the world can be found in the Museum of Witchcraft in Boscastle (www.museumofwitchcraft.com); However, people with an overly sensitive frame of mind should be warned. From baby seahorses to tropical sharks, the Blue Reef Aquarium in Newquay introduces the fascinating underwater world, face to face (www.bluereefaquarium.co.uk). Banausen whiz past St. Ives, friends of modern art take a look at the Tate Gallery there (www.tate.org.uk/stives). The visitor mines Levant Mine and Geevor Tin Mine (www.landsendarea.com/trails/de/levant.htm, www.geevor.com) commemorate the golden times of copper and tin mining. Everything is so incredibly green here: Around 100,000 plant species, housed in gigantic greenhouse balloons, make flora fans sweat easily in the Eden Project (www.edenproject.com). The gardener is not always the killer at the Murder Mystery Evening, as you can experience with a well-groomed table company in Dartmoor (www.twobridges.co.uk/hotel/murdermystery-devon). Whether the thesis “sport is murder” really applies can be checked particularly well on Cornwall’s coasts in a self-experiment at a surf course, for example in Trebarwith Strand (www.surftrebarwith.co.uk).