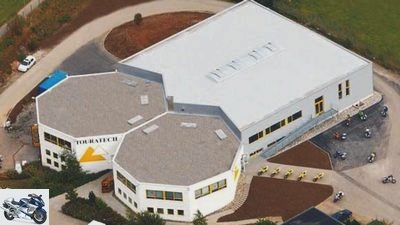 Out and about: Portrait of Touratech

Out and about: Portrait of Touratech
The Touratech managers and their company

The enthusiasm for motorcycling and for Africa brought two otherwise very different types together. Herbert Schwarz and Jochen Schanz have been indulging in another shared passion for 15 years: the development and production of (long-distance) travel accessories.

When someone takes a picture of that thing, you either take the camera away from them or shoot them!” The thing was a still top secret BMW pre-series machine; and the announcement by the industry representative was made on the occasion of an upcoming Africa tour, around a year and a half before the market launch. Addressed was Herbert Schwarz, founder of Touratech, THE German outfitter for (BMW) motorcyclists who love to travel. Herbert is a recognized conscientious objector and understandably favored the camera solution. The matter went well even without the camera being backed up, the F 800 GS remained undiscovered. The anecdote illustrates quite well the league in which the company based in Niedereschach on the eastern edge of the Black Forest is now playing. Around four to five years before the start of series production, the Touratech managers hold initial discussions with the motorcycle manufacturer in order to help develop suitable (original) accessories during vehicle development.

Out and about: Portrait of Touratech
The Touratech managers and their company

Absolute secrecy and very professional work are necessary to get into such a position of trust. This close collaboration with BMW has been going on for a good six years, but the first contacts were anything but harmonious. Touratech was considered a BMW competitor in the accessories sector. The Bavarians had production very far away and made life difficult for Touratech. It was only when the (quality) suffering became too great that Herbert Schwarz and his partner Jochen Schanz received an order to develop motorcycle cases. “We could manage 30 pieces a day – but BMW wanted 100 pieces”, Herbert remembers. Touratech wanted the job, hired new people and neglected its own program.

Delivery delays and a lot of trouble were the result. But together with the BMW department “Supplier development” you got the problems under control within three months – today the around 180 Touratech employees handle 200 suitcases a day. With 40,000 pieces per year, the aluminum case is Touratech’s most successful product. But other Touratech products such as the large engine guard, handguard and pannier racks can also be found in the BMW price lists as original parts. 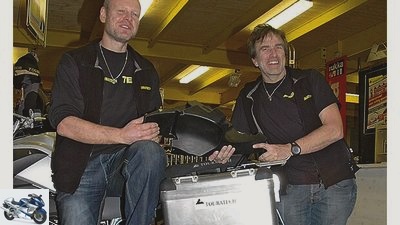 BMW and BMW drivers account for around 60 percent of the business, but the first major customer was KTM in 1996. It all started much earlier: In the mid-1980s, professional electronics technician and hobby world traveler Herbert Schwarz made a bicycle speedometer suitable for motorcycles, built his first aluminum case and in 1990 developed a motorcycle computer (which is still only available in a slightly revised form). One of the first customers of the company, which was founded in 1990, is the technician Jochen Schanz. The customer first becomes Herbert’s travel partner and then his business partner. In 1995/96 both started working full-time in the travel accessories business and in 1997 hired their first employees. When what was developed and how can be read at www.touratech.de in epic breadth.

But today’s look behind the Touratech scenes is even more exciting than the company’s history. There are three things that surprise: the two very different types Schwarz and Schanz, the extremely high vertical range of manufacture and the extraordinary corporate culture. Herbert Schwarz, who is responsible for sales and marketing, is a vegetarian and adventurer, a guy who doesn’t care about luxury and motorsport, who doesn’t want Chinese products in their range for political reasons (human rights, political influence) and who doesn’t manufacture anything for the military sector (“There were various inquiries about our GPS technology”). That sounds like a militant do-gooder, but Herbert has nothing to do with professional involvement and sense of mission. On the contrary, some of his often very funny and ironic statements are anything but politically correct. Herbert on the topic of target group: “Accessories for cruisers or choppers would damage our brand image.

Neither can I expect my employees to throw up my breakfast at their feet.” Jochen Schanz is more of the safety-oriented Swabian carnivore with a penchant for ecologically highly questionable motorcycle races. His calm, nice, but very specific manner fits perfectly with the development and production area that he oversees. And it has it all: the vertical range of manufacture is around 80 percent, with aluminum cases even almost 100 percent. The Touratech machine park includes state-of-the-art laser cutting machines and welding robots, and you treat yourself to the luxury of having your own electroplating shop. In addition to high-tech, older machines from the 1960s are also used – bought cheaply second-hand (“ten euros for a deburring machine”) and made suitable for your own purposes. 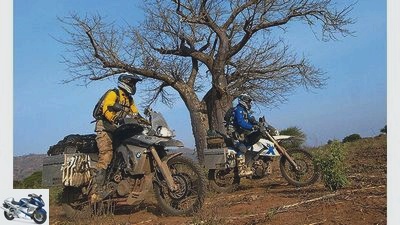 The two Touratech managers also test their products themselves under all possible circumstances.

Make it fit, improvise professionally, find unconventional, people-friendly solutions – that best describes the Touratech corporate culture. Would you like some examples? When the neighboring tennis club was about to end, Touratech quickly took over the 3000 m² hall and turned it into an ingenious combination of sales, warehouse, dispatch and shop (shop area 800 m²). The local Italian takes care of the relocation of employees and customers, lured away from the center and as the host of the indoor tennis center “Travel Inn” Installed.

Worries about the future? No, Touratech is growing even in the crisis. Herbert Schwarz on this: “We do not produce more expensive here than abroad and have already won tenders against China.” Did nothing ever go wrong? Oh but! The biggest Touratech flop is a difficult to install, difficult to fill, unsaleable additional GS tank. Development costs? “Around five R 1200 GS.” Nobody is perfect. Not even Touratech. 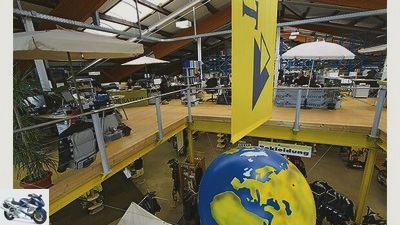 The rooms for sales and guests are in the converted tennis hall.

Touratech’s internet business now accounts for 50 percent, but those who have time should definitely treat themselves to the shop in Niedereschach live. During the motorcycle season there is every Saturday from 9 a.m. to 12.30 p.m. “Travel Inn” A biker breakfast for five euros, the perfect start for power shopping and / or a Black Forest tour. Whether online or live, the Touratech catalog (1092 pages!) Is required reading for enduro riders who love to travel. The Streetline catalog is responsible for road machines (324 pages), for older enduros the Timeless catalog (196 pages).