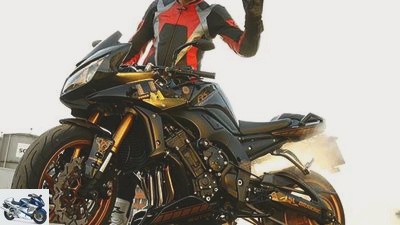 Malicious tongues claim it is easier to find a tuner than a PS. Maybe true. Nevertheless: Germany’s tuner guild has a lot to offer. For this tuning special, MOTORRAD tested five different approaches to optimization.

From the backyard mechanic to the superbike maker, the scene has interesting solutions ready for every wish and every budget.

And suddenly the world stands still. Now you know why you live. This moment alone is worth it. That grateful tenth of a second of the delay between turning the throttle grip and the subsequent reaction. You mean you can literally feel how this grandiose mechanical muscle briefly contracts under you. Tense up, rears up. To then pull you forward with merciless force in no time at all. Life for the moment. Now is all that matters.
A chunk of divinely refined metal has seldom aroused such emotions. Go to a Harley meeting with the Palatina Rocket. Put them down. Go away. A crowd will get up
form. The Rocket pulls the Harley-drivers away from their American poltergeists like a magnet that is polarized on human flesh. What kind of drugs does Rebholz take??
Fritz Rebholz, 50, is a master mechanic with 99 percent petrol in his blood. Other stimulants are out of the question for him. He’s got the super cruiser
Triumph Rocket tucked into a dress worthy of the drive. 2.3 liter displacement, 200 Newton meters, 140 hp. Announces the accompanying prospectus of the British. Exaggerated? The most powerful specimen that the MOTORRAD test bench was able to survive, pressed 136 hp and 198 Newton meters. That’s bold. But neutered. Because Triumph reduces the torque in the bottom three
Corridors. The top speed is also electronically blocked in the last gear. In connection with more breathing air, Rebholz elicits 149 hp from the monster with a simple software change. And a huge 202 Nm are even 900 tours earlier than the original. In addition, the master has given his displacement giant the most beautiful buttocks that you can imagine.
The hump, like almost all parts of the conversion, consists of
meticulously processed carbon fibers. An elaborate silencer is hidden beneath it, which releases its gases through three laser end pipes. Sound? Cool. TuV? In any case. At every start, a vacuum of awe and respect is created,
that makes your stomach shrink for a moment. 2.3 liters of air / petrol-
Mixtures explode with the snap of a finger. If you believe the tachometer, the crankshaft of the three-cylinder rotates at idle with a ridiculous 600 revolutions. The sound stumbles out of the three pipes in a throaty, bassy tone. Wrudu,
wrudu, wrudu, wrudu … It smells of coolness, gasoline and sheer violence. This smell intensifies when your abdomen meshes with the roadster, your feet press against the pegs, you bend your upper body slightly, take the broad handlebars in your hands and knock into first gear.
Clutch out: 202 Newton meters at 2300 rpm? to drive
let on the wave of power. Yes power! Because anyone who thinks that the 13 hp more and the maximum torque that was available earlier is everything, is wrong. Rebholz ?? Rocket reacts differently than the series counterpart. The mapping is merciless. No torque limit, no consideration. Everything that works. When you turn the throttle digitally, the horsepower sweeps through the transmission, tortures the clutch, twisting the cardan shaft, and maltreating tires. The tenth of a second described at the beginning of the text lies between the gas inflation and the black line on the asphalt. You turn the handle. Feel how the engine twitches briefly, the rocket briefly tenses, as if you are squeezing your buttocks while sitting. And then shoot you into hyperspace.
The sensual downside of power: By being very early-
The engine tells you that it would like to have engaged the next gear just above idle speed. So imagine you’re pinching yours
Buttocks four times in a row with an interval of one second
together. And then glide through nature at a casual 80 km / h and 2000 revolutions. Anyone who now thinks that the roadster is only an enforcer on the straight is mistaken for the second time.
Rebholz has not only placed the notches far back, but also higher. As a bank angle limiters are used on the left
felt 42 degrees of the license plate holder and right only your fear. Curve surfing with the from 361 to 329 kilograms-
speckled bolide has to be learned. Whoever is firing at the bend with it should have already reduced it to the correct speed when entering the bend. Hard braking at the front in an inclined position acknowledges the Rocket with a violent pitching up. So don’t
pull out. Instead, vigorously fold down over the wide handlebars, decelerate at the rear, thereby steering along and confronting the flanks of the 240 with abrasion. Usually do not know them. At the apex you can choose: Gas gently? the cruiser style ?? or load through. And as with MotoGP-
Steer machines by slide.
Crazy, right? You actually have to experience it yourself. And I can only wish that Fritz Rebholz does not lose any of his idealism and still turns a lot of his sack full of ideas into reality.

Fritz Rebholz, 50, is a master mechanic and owner of the Palatina motorcycle workshop in Landau. The gifted mechanic sees himself less as a tuner and more as someone who implements his visions. It’s good when something like the RS III comes out of it.

The driving report of the prototype of the Rocket RS III was published in MOTORRAD at the end of May 2005. How many machines have meanwhile been sold??
Seven copies were produced, five sold so far. The prototype and a new vehicle with a black engine / drivetrain are still in the starting blocks for enthusiasts.
What kind of people are they who buy such an over-roadster?
Technology freaks, at the same time finish fetishists, sympathetic, serene people who want to own an absolutely extraordinary and powerful motorcycle, but without ?? the
is an important criterion ?? renounce suitability for everyday use
want, although it is by no means their only motorcycle. Even
if an RS-Rocket has the effect of a magnet wherever it appears and thrown into a box full of iron filings, I would rather describe the owners as people who otherwise carry the mink inside.
Would it be possible to build an even more radical naked bike based on the Rocket that is much more active? possibly without the 240 rear tire?
That would certainly be possible. But not without very deep-
sweeping changes. So that would be more of a case for Triumph itself. Given the response to our roadster, I could well imagine enough customers, at least in Europe.
You drove into the factory with two RS IIIs to Triumph. If the British were impressed by your conversion, they might build something like this in series?
The reactions of individual Triumph employees ranged from admiring to enthusiastic, but only absolutely “unofficial”. Triumph Germany, with whom we have very good contact, supports us, at least ideally. England probably has something else with that
Rocket III before, definitely not: reduce to max!
When the mapping is changed, the reduction in torque in the lower three gears is canceled. Do you have any be-
think that the loads on the drive train are too high?
Anyone who has ever seen the innards of a Rocket powertrain has no doubt that Triumph originally generated significantly more power from the engine in the first development phase. That is why a rocket is still not sewn on the edge of any component. For the targeted cruiser clientele, the power and torque limitation makes sense in favor of a more controllable power development.